The Searchers: The Making of an American Legend 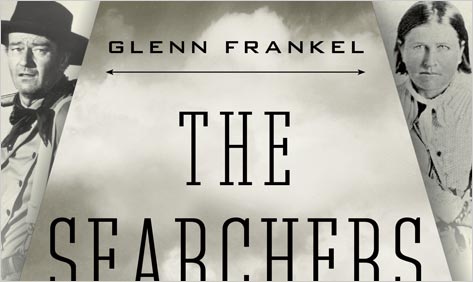 The Searchers may well be foolproof as a movie recommendation, even if the person you’re recommending it to comes away — as some are bound to — thinking they’ve just had some vital element of their core constitution ransacked. Some art — the gentler, less gritty variety — effects its changes with the tacit, willing cooperation of each member of its audience. We see something we welcome, we lean closer to the page or further forward in our chair, and the journey becomes, if not sweetness and light, calm and restorative.

Those would not be words — and Pulitzer Prize winner Glenn Frankel does not use anything like them here — to describe John Ford’s 1956 masterpiece, the twelfth film he had made with his leading acolyte (and favorite whipping boy), John Wayne. The Searchers has a grip that few works of art do and, as is made plain throughout these pages, a will befitting its hard-traveled back-story. For you may sit in front of the television watching the latest airing on TCM, believing you will kill a couple of hours. But even if you are otherwise as unbudgeable as the buttes of Ford’s beloved Monument Valley, it is all but impossible not to go to ground, in an emotional sense. For The Searchers is that rare cinematic experience: a film that doubles as a toppling wind.

But even most of its boosters do not know that the story of The Searchers has roots in the real-life narrative of Cynthia Ann Parker, who in 1836, at the age of nine, was abducted from her East Texas home by raiding Comanches, an act that provided the first tragedy of Parker’s life, one that would — ironically — be eclipsed by her eventual return to the white world in 1860. Alan Le May’s 1954 novel (also called The Searchers), from which Ford’s film was adapted, left behind the specifics of Cynthia Ann’s ordeal. But the spirit — if not the shape — of both novel and film can be easily traced back to a genre best exemplified by the real-life characters of the Parker clan.

Captivity narratives used to be the stuff of popular fiction — and various overstretched, jingoism-heavy journalistic pieces — in the second half of the eighteenth century, as familiar then as celebrity “dish” memoirs are now. Time, of course, has dimmed their sensationalistic luster, but this is Frankel’s beat, so to speak, and we’re quickly brought up to speed on the tropes of the medium: the good-for-nothing Indians — who were typically characterized as a cut above the buffalo they hunted — targeted a homestead, raided en masse, shot the men or bludgeoned open their heads, raped and killed the women, and made off with a child or two, usually females. If she made it to marrying age, the captive would likely become one of her captor’s wives. The whites, meanwhile — and this is where the notion of the searcher comes in — would have been tracking the Indians, following leads from trappers, what have you. The plan was to either put a bullet in the brain of the abductee, thus restoring natural order by ending a life that had been tainted by carnal knowledge of the Indian blood, or else bring the victim — willingly or no — back to the white society.

The latter scenario was Cynthia Ann’s lot, and we see tragedy compounded by tragedy, and a woman being stripped of her identity, not once but twice. Myriad contemporary prose attempts were made to portray Cynthia Ann as possessing a humble, dignified genius for self-preservation, but as Frankel writes, “Cynthia Ann was not the hardy survivor but rather the ultimate victim of the Texas-Comanche wars, abducted and traumatized by both sides.” Unwittingly, perhaps, in the second instance. Her uncle, James Parker, was the de facto searcher, and probably not the best guy you’d want for the task, given his status as a hard-drinking flimflam man and Indian hater.

Unlike John Wayne’s Ethan Edwards in The Searchers, Parker never got his quarry. Texas Rangers “rescued” Cynthia Ann, and she rejoined the white world, separated from her sons: miserable, displaced, a husk. The gutting drama of Cynthia Ann’s story is mitigated, in part, by what Frankel reveals her story to have opened out into: Alan Le May’s arduously researched novel. which made use of the “best” bits of number of captivity tales, Cynthia Ann’s included, and in turn piqued the interest of Ford, led to Frank Nugent’s script (which Ford pared back, as we learn, at every opportunity, forsaking words for what could be said, instead, by the camera), induced John Wayne’s greatest performance, and set up an inverted narrative, of sorts, where the subject isn’t so much the captive but those who pursue her — or, more accurately, something inside themselves.

Anyone who watches The Searchers has doubtless felt the sensation of suddenly being dropped onto a trail and being caught up in something one did not see coming, emotionally. Frankel points to some of the bad reviews the film received, and it’s fascinating to see the critics, without knowing they were doing so, reveal just how uncomfortable the film made them. They cite its “ambiguity,” but its way of hijacking the viewer’s complicity might have been a better way of putting it. Even the positive reviews — which generally outnumbered the bad — were unconvincing, not for a lack of enthusiasm, so much, as because of the prevailing confusion that often meets something truly new in art. What, in other words, is to be made of this entirely new conceit? How good is it, even? In such cases, the tendency is to leave the nuts-and-bolts job of sorting out what is what to others.

“What none of the critics, positive or negative, grasped was that The Searchers was a different kind of Western, something much darker and more disturbing than the usual fare,” Frankel writes. The Searchers, simply, unnerves you, because of what it gets you to consider about yourself. Wayne’s character is in the put-a-bullet-in-the-brain school of thought regarding his filmic niece, played by Natalie Wood. And yet one roots for Wayne. Hard. Not to kill, but rather because of his capacity to endure and outlast, no matter how little is coming back in return. Traits, in some ways, his Ethan Edwards character shares with Cynthia Ann, a discomfiting notion in that it suggests to the viewer that none of us are as locked down to fixed moral and emotional points as we hope, or believe, we are. Perhaps that is why we have a tendency to keep close to our standby coordinates, a searcher therefore being a threat by contrast, both in terms of westerns and more existential matters. So it was for Wayne’s Ethan Edwards. So it goes for just about anyone who watches The Searchers, as Frankel’s book attests. For those two hours, anyway.