The Secret History of Costaguana 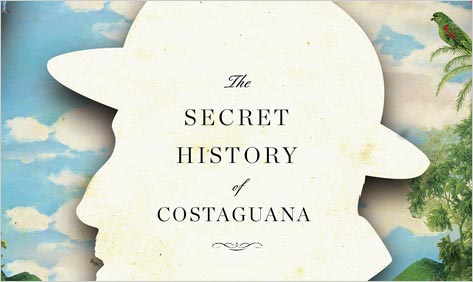 Less than a quarter of the way into Joseph Conrad’s 1904 novel, Nostromo, a venture capitalist by the name of Mr. Holroyd—burly, jingoistic, evangelical—takes a meeting with Charles Gould, a businessman passing through San Francisco. Gould is in search of financial backing for a silver mine that he inherited in Sulaco, a province of the fictional Latin America country Costaguana. The budding entrepreneur impresses Holroyd with his assiduousness.  But before acceding to Gould’s request, Holroyd, never one to miss an opportunity for grandstanding, spouts wise: “Now, what is Costaguana? It is the bottomless pit of ten-percent loans and other fool instruments. European capital has been flung at it for years. Not ours though. We in this country know just about enough to keep indoors when it rains… Of course, some day we shall step in.”

Juan Gabriel Vásquez’s The Secret History of Costaguana rewires the events that led Conrad to write Nostromo, implanting them within the fictional life of one José Altamirano, a Colombian whose existence–-at least in his own mind-–is a curious shadow of the Conrad’s own.  We meet Altamirano,  an expatriate living in London, as he learns of Conrad’s death in the early days of August 1924. The obituaries he reads spark mixed feelings in him. Although Altamirano met Conrad only twice, these incidents have left an indelible mark—so much so that in the intervening years since their last encounter, in January 1904, he has come to interpret the events of Conrad’s life in the light of his own. What he finds are “metaphysical affinities” that demonstrate, to his suspect way of thinking, that he and Conrad are “two incarnations of the same Joe, two versions of the same fate…”

José finds it striking, for instance, that when Conrad was born his father dedicated a poem to him that inveighed upon the Russian occupiers of their native Poland–while, across the Atlantic, the two-year-old Altamirano was drawing homegrown warriors busily engaged in thrashing Spanish colonialists. Or that at twenty, Conrad was recuperating from a suicide attempt, while his Colombian double was laid up with pneumonia. Other tenuous examples proliferate.

Though the spirit of the Polish writer buttresses the novel’s form, his character plays a supporting role. For Conrad lovers who feel dejected by that news, there is scant reason to pay it second thought. In qualitative terms, The Secret History of Costaguana testifies to Harold Bloom’s much-cited paradigm that the best artists don’t genuflect before their influences but repurpose them for their own ends. Vásquez gamely challenges the depth of Conrad’s grasp of Latin American politics by subsuming the fictional land of Costaguana beneath the convulsive history of his native homeland, Colombia.  Whereas Nostromo pivots around the lives of people whose economic and political interests are tied up with the goings-on at the silver mine, The Secret History of Costaguana is richly informed by the dramatic history of the Panama Canal and its construction.

As this tricky engagement with events real and imaginary unfolds, the true engine of the novel proves not to be Conrad at all but José s father, Miguel Altamirano. Educated as a lawyer but earning his keep as a liberal journalist, Miguel is forced to flee Bogotá after incurring the wrath of the conservative, Catholic establishment.  He eventually makes his way to Colón, a city in the then-Colombian territory of Panama, which borders the Caribbean Sea. Soon after his arrival, he has a one-night stand with a married woman, Antonia de Narváez. Though their brief union results in the birth of José, De Narváez shuns Miguel’s entreaties to reconnect.  José grows up ignorant of his father’s identity until, at twenty-one, he extracts enough information from his mother to go looking for him.

When he finds Miguel, he discovers a man who has allowed his commitment to the ideal of progress with a capital “P” to mislead him into becoming a propagandist for the French-supported, Canal Company:

I discovered that over the course of two decades my father had produced, from his mahogany desk…a scale model of the Isthmus. No, model is not the word, or perhaps it is the applicable word to the first years of his journalistic labors; but starting from some imprecise moment (futile, from a scientific point of view, to try to date it), what was represented in my father’s articles was more than a distortion…of Panamanian reality… Now I can say it: that was my first contact with the notion, which would so often appear in my future life, that reality is a frail enemy to the power of the pen, that anyone can found a utopia simply by arming himself with good rhetoric.

Miguel’s faith in the power of the planned interocean canal to raise the standing of his country is unremitting. Over time, this will lead to his downfall. One of the mysteries of the novel is why José papers over his father’s lies about the supposedly low costs, in economic and human resources, being consumed in the building of the canal with the conceit that “it’s not that my father wrote lies…my father’s pen was the largest refractive lens of the Sovereign State of Panama.” In due time, one realizes that José’s rose-tinted logic is used to preemptively defend his own callousness toward his family and community, both victim to the vicissitudes of Colombia’s fractious political life.

As a moral inquest into the nature of venality that asks who has the right to define and or revise history, and an engrossing critique of Colombia, sparing neither its conservative nor liberal factions, The Secret History of Costaguana conjures a bracing disgust that is harmonized alongside other, less biting pleasures.