The Secret History of Las Vegas 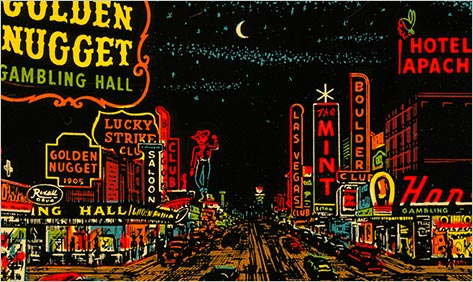 The week I began reading Chris Abani’s new novel, The Secret History of Las Vegas, Nelson Mandela died. To the extent  Americans think of apartheid at all now, they think of Mandela, the horror and his heroism combining in our blurry historical imagination to form a tragedy with a happy ending — a tragedy that belongs to the past. Most of us either never knew about places like Vlakplass, the South African apartheid death camp, and few outside of South Africa think about where any of these torturers went when they left Vlakplass. But Chris Abani has.

Some readers may be surprised that Abani’s new novel is a murder mystery, but it is a return to form. Abani debuted at the age of sixteen in Nigeria in 1983 with the novel Masters of the Board, a thriller that told the story of an attempted Nigerian government coup. When a coup later went off almost exactly as the novel described, he was arrested under suspicion of having planned it and thrown into prison — essentially guilty of a novel that came true. His reputation in America began two years after he moved here in exile, escaping a death sentence in Nigeria for his role in writing and performing anti-government plays outside the offices of the government. He began to document his experiences in poetry, beginning with The Kalakuta Republic in 2001, and since then he has published a book of poetry, a literary novel, or a novella in English almost annually, winning distinguished literary prizes along the way. He lived for much of the time in Los Angeles, the setting for his previous novel, The Virgin of the Flames, and is now in Chicago, teaching at Northwestern. The Secret History of Las Vegas is his first thriller since Masters of the Board, which raises the question: Will this one also come true?

The novel has many of the features of a conventional crime novel: a detective named Salazar and an unsolved crime that obsesses him, a serial killer specializing in mass killings of the homeless who dumps their bodies outside Las Vegas. Salazar gets what he hopes is a break in the case when a ranger calls the police in on a pair of conjoined twins, Fire and Water, members of the sideshow the Carnival of Lost Souls, at first believing he had caught a single man trying to drown an infant in the ghost town’s lake. This is because, to an observer, Water looks like a beautiful man, but “Fire appeared to be little more than a head with two arms, projecting out of Water’s chest,” and Water was, it seems, trying to drown Fire. A tub of human blood is found suspiciously close to the twins’ truck, but there are no bodies nearby. As the twins speak entirely in obscenities and epigrams, refusing to answer the police’s basic questions directly, Salazar brings them in for questioning and a psychological evaluation.

What Salazar doesn’t know — though we do — is that the twins are the children of a desperate young woman who had the misfortune to witness an atomic test while pregnant, and who  hanged herself after arranging for her children to join the sideshow. The novel is structured as several stories that move to intertwine into a larger one, and in these first chapters, as we move from each new character’s point of view, a previous character reappears again as a minor character in the story of the next character.

Three chapters in, we meet a researcher named Sunil, at work at the Desert Palms Institute lab, studying the brain patterns of psychopaths, hoping to learn how to potentially cure and possibly redeem them. This, we learn eventually, is inspired partly by his own terrible history as a researcher at the South African apartheid Vlakplaas death camp. As much as he hopes to redeem the psychopaths, he hopes, with this work, to redeem himself, even as he is aware the American military is his only funder, and their interest in the turning on and off of psychopaths is likely less than innocent.

Called in by Salazar to evaluate the twins, Sunil is reluctant, but his senior at the institute insists the twins’ brains could be beneficial to their study — “Just go get me those monsters” — and so Sunil leaves immediately on an errand that will change his life. For outside the Desert Palm offices, Eskia, an assassin and former member of Nelson Mandela’s ANC party, sits in a car across the street. Eskia has traveled all this way to kill Sunil, who  no longer believes himself to be in danger from his past; the time for Eskia’s vengeance looks to have arrived. Cliff-hangers all.

Written in what feels like an L.A. Noir version of Abani’s customarily visceral prose, part of the pleasure of the novel is the view he gives us into the strange history of Las Vegas from Sunil, who, in exile, is fascinated by his new home, In particular,

the old bomb parties the casinos used to host back in the ’50s, when the U.S. Government set off nukes in the nearby desert, sometimes as close as six miles from the city. The casinos sold package tours to see U.S. history in the making: the end of the commies and the death of the Red Threat. People flocked by the thousands to the dawn parties to watch the mushroom clouds. Minutes after the display, they would return to gambling or turn in to catch some much-needed sleep. Seats on the terrace, where one could watch the explosions while sipping on a cocktail, were fought over. Those unable to afford the parties or terraces drove out to ground zero and hiked as close as possible. The Atomic Energy Commission never turned them away, even when there were families with children.

These parties, of course, are the source of the twins, Fire and Water. Sunil moves between thoughts like this and his own violent memories of Vlakplaas, such as a study conducted to test endurance:

[T]hey would put a female baboon and her baby in a cage. Then they would start up the fire under the metal floor, slowly turning up the heat, calculating how long the mother would endure the pain before putting the baby down and standing on it. It never took that long, usually less than thirty minutes… The problem with the primate tests was that sooner or later, apes weren’t enough. The first human trial at Vlakplaas of the heat test was a woman called Beatrice. No last name. Her baby didn’t even get a name in the file. Just Baby.

Crime novels are reliably a stereoscope — the same story from two or more points of view — but usually of a limited kind, with just two sides: that of the investigator, and that of the criminal. The victim’s contribution is usually limited to a sharp cry of pain near the beginning or the end, or a brief chapter before death. But Abani’s stereoscope is much wider. While it is soon clear Sunil is the novel’s antihero and the twins its bête noir, they are the poles to an intricate puzzle with rays spreading suspicion as to what the crime really is, and who is really the criminal, in prismatic directions before the climactic reveal. By opening up the novel to these many perspectives, the chapters may at times blur, but by consistently bringing into question who is guilty and of what crime, Abani also adds many sides to the story he tells so unforgettably, giving voices to otherwise voiceless victims in the process.

If a crime novel can show humanity at its worst, it also holds out the possibility for justice, and this is what allows us to continue through the dystopic vision of this world Abani has made, grounded in real events he has researched carefully. He is in pursuit of the portrayal of a violence that potentially stalks us all, a monster unaware of its past and with potentially deadly consequences for many more than the dead homeless men who haunt Detective Salazar. The irony of the figure of the conjoined twins is that they might be the least monstrous characters in the novel. What appears at the novel’s heart before the murderer is unveiled is a legacy of brutality, and its true subject, these places where governments play with the lives of their citizens, in ways that make the acts of a simple killer seem a little small, whether in South Africa under apartheid or in the Las Vegas desert. The question may not be whether this beautiful, ruthless novel will come true but rather, Has it already come true? And if so, what should we do?