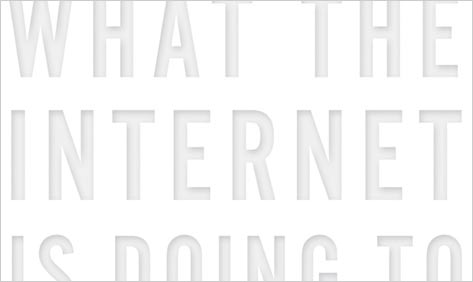 Just to give you advance notice, the following words are not a typographical or technological error: Whatifthebeginningofthispiecehadbeenwrittenlikethisyou
wouldhavehadtosortofreaditoutloudtoyourselfinordertounderstanditright?

In the early pages of The Shallows: What the Internet Is Doing to Our Brains, Nicholas Carr, the author of two previous and for the most part socially nonjudgmental books about the Web, reviews the enormous change that simply putting spaces between words, beginning somewhere around 1000 AD, made to the act and nature of reading. Before that absolutely brilliant invention, reading had to be done—and was meant to be done—more or less out loud. With the insertion of spaces (and the arrival of paragraphs and punctuation and standard word orders), reading began its transformation into something else entirely—a deep, silent, much more rapid but also far more intellectually immersive act. “Readers [now] disengaged their attention from the outward flow of stimuli in order to engage it more deeply with an inward flow of words, ideas, and emotions,” Carr writes. He also points out that this transformation “required complex changes in the circuitry of the brain, as contemporary studies of young readers show.”

If you didn’t realize this before, think about it now. It makes such intellectually dramatic sense. And it works as an excellent foundation for the main argument of this generally excellent and important book (which is an expansion of a widely-read piece Carr did not long ago for The Atlantic, “Is Google Making Us Stupid?”). That argument is:

Usually, I call this kind of doomy pronouncement “geezer talk,” because it’s what old people tend to indulge in as they fail to face—and instead displace—their own fears of death onto the state of the world as a whole. My parents did, yours probably did—or do—too. Not that Mr. Carr is old. He’s about fifty, a former editor of the Harvard Business Review whose previous, comparatively neutral attitude toward the technological revolution seems now to have given way to the values of his still earlier incarnation as a Harvard MA in English and American Literature and Language. Because in The Shallows, he clearly and deeply values creative, literary, and philosophical endeavor above all others; he worries about their future, and proves, to my satisfaction anyway, that he is right to worry. This book is not geezer talk, then—it’s required reading for anyone who wants a cogent, comprehensive, and thoroughly researched statement of the techno-fears that, in however inchoate a way, many of us have harbored for going on a few decades now.

Two reservations—one minor, the other more apocalyptic than geezer talk. The Shallows repeats a couple of its basic ideas more than it needs to, especially the McLuhanite concept that the medium eventually shapes us as much as, if not more than, we shape it. (By the way, when I just typed “the,” this word-processing program suggested “themselves” as a convenient Enter shortcut. The. Just did it again. And when I typed in “pro,” it suggested “process” instead of “program.” Carr brilliantly analyzes the implications of this sort of “helpful” HAL-like technological usurpation.)

The other, more apocalyptic reservation: in saying that we are in danger of losing our “humanness” to the Internet and electronica in general, Carr is choosing to emphasize—in fact, to posit as central and essential—certain aspects of that humanness, while ignoring others, which I consider, in my amateur way, and very sadly, just as central and essential. I am talking about our species’s tendency to constantly develop and invent and do things not only inimical to our better natures, but threatening to our very existence. To wit: environmental havoc, horrific weaponry, religious zealotry, overpopulation, dietary atrocities, greed. The very cortices and hippocampi and parietal lobes and such, whose higher, deeper functions Carr sees imperiled by the Internet, are what created the Internet in the first place. So wouldn’t it be more accurate to say that we are allowing one (destructive) aspect of our humanness to beat up another (sublime) one? I’m afraid so.