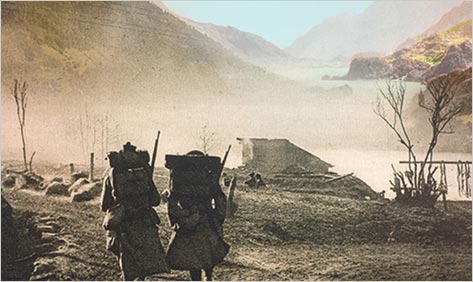 On the day I finished reading The Sojourn, Andrew Krivak’s riveting novel about World War I, the last surviving male veteran of that “war to end all wars” died. Claude Choules was 110 when he passed away at a nursing home in Perth, Australia, and I wonder what he would have thought of Krivak’s story about a sniper who undergoes the standard hells of war literature before arriving at uneasy peace with himself on the last page. Though Choules was a seaman with the British Royal Navy, I suspect he shared the same kind of scarred psyche as Jozef Vinich, the Austrian sharpshooter in The Sojourn who comes marching home full of “grief and desolation.” Mr. Choules was, after all, a pacifist.

And isn’t that the resonant effect of most war literature–to turn readers’ hearts and minds against militarized conflict? There is, of course, a strand of fiction which celebrates and glorifies the act of man killing man, but the most serious and enduring works of literature provoke us to reconsider the ends in light of the means. Think of All Quiet on the Western Front, A Farewell to Arms, even Catch-22, and it’s the horrors of battle scenes which stick in our memory and pour cold water on delusions of war’s grandeur (though nations seem little able to remember the lesson).

The Sojourn is no exception and, in terms of the power of its prose, deserves to be placed on the same shelf as Remarque, Hemingway and Heller (though you won’t find a trace of humor in this sobering novel). Krivak’s style is simple, direct, and sedate, but when violence appears, it comes in unforgettable detail:

Miro was killed in a wave of shelling by the Russians, blown in half, this man who fought in their company said, but taking some time to die as his legless trunk of a body lay against the stump of a fallen tree and he clawed at the sky, pleading for someone to help him.

The Sojourn is told in three parts, and Krivak paces his cadence to the beat of a three-act play, beginning with a prologue set in 1899 in a Colorado mining town where Jozef’s father, a Slovak immigrant, oversees the smelter. The opening section ends with a shocking scene in which Jozef’s mother is killed on a train trestle– she tosses the infant into the river below to save him. As the main part of the book starts, we find Jozef and his father have eventually moved back to the “ol’ kawntree,” to a small village “in the northeast corner of the Hungarian Empire.” The elder Vinich retreats to the pastoral life of a shepherd. He raises his son to be a hunter who can become invisible against the earth–a trait that will later serve him well as a sniper.

As a restless youth tending sheep on the hillside, Jozef fills himself with “the imagined valor of heroic battles, and the thought that death would be a thing I doled out to others who dared resist.” He’s determined to leave home as soon as he can so he can forge a better path in life than his father, the failed miner-cum-shepherd. “I wanted to become what he was not.” As the boy sets out on that path early in the book, Krivak makes it clear that Jozef’s head swims with the glory of war:

When we went back down to Pastvina for the winter in 1914, all we heard was talk of the war. Boys a few years older than I wore their cadet uniforms daily, and men from our village marched off to the conscription office in Eperjes to join the fight against the Russians on the eastern front. There was a fever rising, and not just for battle. Young men, as always, sensed a chance to leave the boredom of their villages and see to the borders of the empire and beyond, but this time their departure was imminent, and so they lived and worked and moved in a tension between excitement and rage. Or maybe I’m just remembering what the thoughts of war began to evoke in me.

There’s little doubt, even at this point, that Krivak is setting the stage for the character’s metamorphosis from starry-eyed recruit to hollow-eyed veteran. Jozef is barely in uniform before he’s filled with “a hard and intractable anger.” The transformation is predictable, but thanks to the author’s surefootedness as a stylist, it’s never obvious or overbearing. The Sojourn is a short, dense novel, but it’s also one which pulls us in and never lets us go. The narrative is cropped of frills and Krivak packs each sentence with as much information as he can. For instance, just look at the range of detail and movement of emotion in this one sentence in which Jozef describes his role as a sniper:

We were hunters who already knew how to stalk game in the mountains and forests we had lived in before the war, and who were now being taught to hunt men, observing their numbers, their movements, their skills or the lack of them, their habits, and ultimately their faces–front or back–through the crosshairs of a rifle scope, all so that we might kill them, one at a time, with a silence that terrified them more than anything because it held nothing of the glory they imagined they’d find in battle.

A few pages later, there’s this horribly precise description of the sniper’s work:

We were trained to make head shots and aimed for the teeth, which seems ludicrous until, on a cold morning, across the distance of a valley through refracted light, you can suddenly see a man’s breath, see that he’s speaking to a comrade, or perhaps only to himself, having a smoke, singing a song he loves, or maybe giving voice to some prayer, words that will be his last.

In The Sojourn, war can be beautiful on the page, but hell in contemplation. As a writer, Krivak approaches combat with the placid nature of a Zen master–calmly, patiently knocking down the marble statues erected to glorify battles. His Jozef is on an odyssey from gung-ho Soldat to steel-hearted sniper to conscience-stricken prey-on-the-run to bedraggled prisoner-of-war. It’s no accident The Sojourn‘s epigraph comes from The Radetzky March, Joseph Roth’s 1932 masterpiece about disillusionment amid the dissolution of the Austro-Hungarian Empire.

But if it sounds like the The Sojourn leaves one confronting a pessimistic, glass-half-empty view of life, Krivak’s greatest feat is to steer the reader in the opposite direction. By the end of the novel, with all that Jozef has gone through–coming of age on a battlefield, a laborious trek across the Alps, starvation in a post-war landscape–the glass is half full with grace and redemption. The final paragraph finds Jozef on a steamer bound for America as it pulls away from the port in Hamburg:

The ship slipped her lines and a tug nudged her into mid-river, where she stalled briefly, waiting to see that everything that lay before her on the course below was clear. Then Hamburg, and Europe, and all her empires, all I had ever known–the only ground that up until then had fed me, the only well from which I had drunk–receded in slow swaths of wash and sky as we surrendered to the outgoing tide on the Elbe.

One of The Sojourn‘s most telling points about warfare is made by a fellow prisoner with whom Jozef is being held after capture by Italian soldiers:

…he believed that nothing proved truer in the course of one’s life than a man’s incessant need to fight–even when convinced that he wants nothing more than peace–against someone, something, some other, so that he doesn’t go to his grave having lived to no purpose.
“I have had enough of my purpose,” I said.
“Well then, welcome to death,” he said, and smiled, so that his aged teeth looked like slabs of white marble, and I did indeed feel vanquished.

Those tombstone teeth might be putting too fine a point on it, but on the whole Krivak has written an anti-war novel with all the heat of a just-fired artillery gun. And for many readers it is likely to burn away any notion of the romance of combat