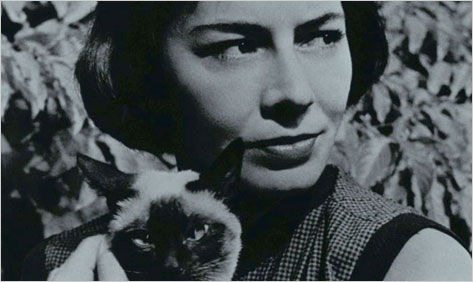 Eugene O’Neill believed that the true artist is not at home in the world.  If the more estranged you are, the greater the artist, then Patricia Highsmith would rank higher than Shakespeare.  Instead, Highsmith was superb but limited creator of crime fiction.  Her best work is quirky, edgy, and deeply insightful into the secret places of desire — and of hatred, which dwells in the same precincts.  Highsmith’s friends, lovers, and acquaintances remember her as a difficult and often unpleasant person who lived an angry, solitary life.  In Joan Schenkar, Highsmith has found a biographer who does meaningful justice to both her powerful work and her uncomfortable existence.

Highsmith was a terrifically prolific writer, a fountainhead of ideas.  Her best books — like The Talented Mr. Ripley, the 1955 classic of a man who murders without guilt, a novel that spawned four sequels (and which gives Schenkar’s biography its name) — rank among the best writing ever produced by the crime genre.  Highsmith’s 1950 debut novel, Strangers on a Train, bears only passing resemblance to Hitchcock’s 1951 movie adaptation in its memorable rendering of two men wracked and destroyed by their own conflicted longings for death and each other.  That book heads a long stream of stories of desire and cruelty that winds through great books like This Sweet Sickness (whose main character does not work at his sanity, as Schenkar observes Highsmith did) and Edith’s Diary (1977), another tale of the seductive power of fantasy.  Almost everything that Highsmith published is worth reading.

But Highsmith never evolved over the course of a 50-year career.  Instead, she repeatedly plumbed the same dark well, bringing up at the end of her barbed hooks slippery, wriggling, strange, and yet painfully familiar stories.  Highsmith’s lack of evolution has prompted Schenkar to write an inventive kind of biography.  Instead of walking chronologically through Highsmith’s life and work, Schenkar has devised a new biographical form that evokes the mind of its subject, a writer whose creativity — and whose life itself — gained its shape through grinding, deepening repetition.  Schenkar organizes The Talented Miss Highsmith around Highsmith’s obsessions: forgery, impersonation, status seeking, and homosexuality (with the anxiety it brought), to name a few.  The Talented Miss Highsmith thus starts in the middle of Highsmith’s story, moving now forward, now back, and then forward again, like a mind whirling on a wheel.  (The book reads completely coherently in its pendulum-like movements, but just in case, Schenkar places an annotated chronology, “Just the Facts,” in the back.  You won’t need it.)

The unusual end result is a triumph of the biographer’s art.  Schenkar has immersed herself deeply in Highsmith’s voluminous Swiss archives, and as deeply in the scenes that Highsmith moved through: New York in the ’40s and ’50s, and then Europe, after Highsmith expatriated herself in midlife.  Moreover, Schenkar gets to know Highsmith well enough to tell when she was lying, a skill absolutely critical when dealing with a writer who, aware that her archives would be pored over, lied carefully and often to her future biographers.  Schenkar cannily detects lies by omission also.  For instance, she rightly points to the importance of the many years that Highsmith wrote for comic books at the start of her career.  These years served as a kind of low-caste apprenticeship for the young writer, but it was an apprenticeship that Highsmith (who was otherwise a meticulous record keeper) expunged almost entirely from the documentation of her life.  Schenkar recovers it, to revelatory effect.

Highsmith’s fictions flow to and from her life in this way, and the novelist deliberately entangled them.  A chance meeting with a woman customer in a New York department store where Highsmith was working as a clerk resulted, for example, in the groundbreaking The Price of Salt (1952), one of the bravest and most honest fictions of homosexuality of the American 1950s, when Red baiting and homophobia nourished each other and the gay community lived in peril.  The novel is now a landmark of gay literature.  But the same chance encounter also provoked Highsmith to steal the address of that woman she briefly waited on, travel to New Jersey to spy on her, and then fantasize about murdering her — for to Highsmith, “Murder is a kind of making love, a kind of possessing.”  Highsmith had lots of lovers, and while she confined her murders to her fiction, it should not be surprising that she never succeeded in forging a long-term partnership.

In mapping what she calls “Highsmith country,” Schenkar reveals a blighted and bloody land with an “impossibly sore center,” empty of most forms of human kindness and fraught with the conflicts that arose from Highsmith’s unending quarrels with the world and its people.  Schenkar doesn’t psychoanalyze, but she does psychologize — as biographers usually do.  And she discovers in Patricia Highsmith a personality so involuted that that the novelist’s times get sucked into her mind in such a way that political causes (such as Palestinian liberation) are relentlessly forced into the service of her own obsessions.

In Highsmith country “everyone — including the author — is a forger,” and no one may ever be trusted.  Highsmith’s relations with her mother, a classic love-hate struggle marked by numerous rapier-like letters thrust back and forth over the years, exemplified the rest of her social life in this respect.  Highsmith struggled for years to maintain relations with her mother, her dearest friend and closest enemy, and then she cut her mother out of her life.  So, too, with everyone else, from whom she withdrew further and further as she aged; and so, too, with the larger world, from which she retreated into vicious prejudice, starting with a vituperative and always inconsistent anti-Semitism.  “I lack sympathy,” Highsmith once wrote.  She certainly did.

But Schenkar has sympathy even if Highsmith doesn’t, and she shows it through her eloquent understanding of her subject.  How beautifully this book is written!  Schenkar, a playwright as well as a biographer, has a great ear, and her prose sparkles with original imagery, as when she observes at the outset that Highsmith is “as American as rattlesnake venom.”  Such gems glitter throughout this biography.

The Talented Miss Highsmith is a definitive portrait of a writer who was, Schenkar notes, not just an outsider artist but an “outsider everything.”  Schenkar gives a fascinating and enriching tour of the world in which Patricia Highsmith lived, especially the dark, dessicated, and lonely hallways of her mind, creepy corridors in which her works grew, one after another.  This biography takes us to these dangerous places in innovative and stirring style.  It’s a hell of a book — and vice versa.