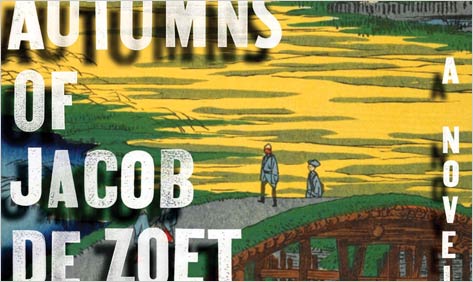 The Thousand Autumns of Jacob de Zoet, David Mitchell’s fifth novel, is a historical romance set in Shogunate Japan, when the country was closed to all but a handful of foreigners, mostly Dutch and Chinese traders confined to the tiny artificial island of Deshima in Nagasaki Bay. Enter, into this interesting isolation, Unico Vorstenbosch, a new Chief sent by the Dutch East India Company to clean up Deshima’s corruption, and his clerk, Jacob de Zoet, poor, pious, eager to earn enough money to go home and marry his sweetheart. What follows is a drama that brings to mind the galloping action of James Clavell’s Shogun: it features deception, betrayal, love, theft, war, graphic depictions of midwifery and kidney-stone removal, games of cards, billiards and go, as well as a daring raid on a mountain abbey where unspeakable practices are, well, practiced, to sustain the life of the monks.

This is entertaining stuff, though it may seem slightly odd to readers who know Mitchell for his novel Cloud Atlas, which nested multiple narratives, set in eras ranging from the 1850s to the post-apocalyptic future, like ingeniously conceived Russian dolls. The Thousand Autumns  eschews such devices: it unfurls like a scroll, from start to finish, often following de Zoet, but forsaking him for long passages to inhabit the mind of Orito Aibagawa, a Japanese midwife with whom de Zoet falls in love; the interpreter Uzaemon Ogawa; the captain of an English warship, and others. These shifts give Mitchell the chance to “do voices,” or rather, to do worlds: the court of Nagasaki’s Magistrate, the warehouses of Deshima, the decks of a warship. His Japan is meticulously researched (it probably didn’t hurt that he lived in Hiroshima for eight years) and his Dutchmen, too. (De Zoet has a real-life model, Hendrik Doeff, who served the Dutch East India Co. on Deshima from 1803 to 1818.) Indeed, there are places in the novel where Mitchell gives vent to a Bolaño-like excess of detail, as when the Dutch scientist Dr. Marinus gives a lecture to a group of Japanese students, and Uzaemon struggles to translate:

Uzaemon does his best to translate this, but it isn’t easy: surely the Dutch word ‘semen’ cannot be related to this unknown verb ‘disseminate’? Goto Shinpachi anticipates his colleague’s difficulty and suggests ‘distribute.’ Uzaemon guesses ‘germinate’ means ‘is accepted,’ but is warned by suspicious glances from the Shirandō’s audience: If we don’t understand the speaker, we blame the interpreter.

The description is so precise that it’s practically educational: you could learn how to deliver a baby from this book, or fire a ship’s gun, or identify a few Japanese characters. So much attention to the minutia of procedure slows the narrative to the courtly pace of Noh theater, but Mitchell is a good enough storyteller that the book rarely bogs down.

At the same time, I couldn’t help feeling that the sharpness of his rendering covers up, or perhaps accompanies, a certain rigidity of character. Jacob de Zoet is not unsympathetic, but at bottom he’s a competent prig, like Julien Sorel in The Red and the Black, but without Julien’s ambition, or his weakness. He falls in love with Orito Aibagawa because she happens to come into his office (looking for a monkey who has stolen a corpse’s foot: another lovely detail), and because she is, like him, unflappable; whether she touches any deeper chord in him, or even whether there exists in him a deeper chord to touch, remains a mystery. Having declared his affection for Orito, de Zoet is briefly ecstatic:

Creation never ceased on the sixth evening, it occurs to the young man. Creation unfolds around us, despite us and through us, at the speed of days and nights, and we like to call it ‘Love.’

It’s a lovely sentiment, but one which seems to come less from Jacob’s heart than from the psalter which he has brought (against regulations) to Japan: a family psalter, which has guarded the hearts of the de Zoets, literally, for generations.

It may simply be that the space in which de Zoet is permitted to act is too small for him to reveal much of himself. Decorum and close quarters discourage the residents of Deshima from histrionics; the conflicts that arise on the island are of loyalty and betrayal, comprehension and incomprehension, tests which might prove the excellence of a dog, but are not so good at illuminating the intricacies of human character. Thus the Dutch: but actually no one in the novel has much room to move. Uzaemon Ogawa is impelled by his love for Orito to embark on a perilous adventure; once that wheel is set in motion, it simply turns, until it reaches the point where it has to stop, having revealed nothing more about Uzaemon than that he’s an honorable fellow who sees things through to the end. Even Orito, given the most harrowing decision in the novel, chooses duty over desire. With the notable exception of the English captain Penhaligon, who is the most complex character in The Thousand Autumns, although he only occupies part of its last third, Mitchell’s people are like go stones, stolidly occupying their places on the novel’s grid, largely unaware of the part they play in the larger design. (As for the book’s obligatory go master, Abbot Enomoto, he’s even worse: his final words partake of a kind of stock villainy that makes Frank Miller look like Henry James.)

All of this would be fine if The Thousand Autumns were a novel of ideas, but it isn’t, and that’s the strangest thing about it. I don’t miss the formal innovation of Cloud Atlas, which seemed to me like another cloaking device, a rapid alternation of narratives to distract the reader from the predictable course of each story in itself; but no other aspect of the novel comes forward to provoke thought. There is some play between science, as represented by Dr. Marinus and de Zoet and Orito, and magic, which is the domain of the nefarious Enomoto; there’s even a moment when Marinus suggests provokingly that “science itself is in the early stages of becoming sentient.” But these intellectual currents don’t have much effect on the course of the novel. What triumphs in the end is neither science nor magic, but honesty and resignation and pluckiness in the face of all odds. There’s a great deal of very interesting history in the novel, regarding European mercantilism and Japan at the dawn of the nineteenth century, but it is resolutely unallegorical, and speaks only of itself. Which leaves The Thousand Autumns in the situation of the country which is its subject: rich, intriguing, and cut off by inexplicable barriers from the rest of the world.