The Three Weissmanns of Westport 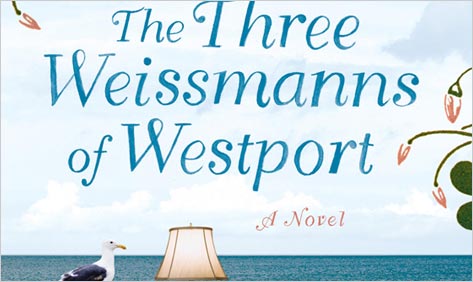 Here are some of the things Cathleen Schine makes fun of in The Three Weissmanns of Westport, her sparkling homage to Sense and Sensibility: men trading in their old wives for newer models; divorce lawyers; author tours and readings; fallout from the rash of fraudulent memoirs; Westport, Connecticut; McMansions; infomercials and daytime television; pomposity; people who incessantly quote Shakespeare; and self-deluding notions of fairness and generosity.

Schine is a master of the modern domestic comedy. Her novels, distinguished by keen intelligence, sharp wit, and, more often than not, an underpinning in the classics, are light yet not without weight, effervescent yet tethered by solid thought and feeling. She’s more intellectually inclined than Elinor Lipman but no less delightful. In Rameau’s Niece (1993), she anchored a satire of academics, New York intelligentsia, and issues of confused sexuality with a pastiche of Diderot and an erotic 18th-century manuscript. In The Evolution of Jane (1998), set in the Galapagos, she applied Darwinian theory to transmutations in close female friendships. She Is Me (2003) refracts a story of three generations of women coping with love, illness, and grief through Flaubert’s Madame Bovary.

And now, with her eighth novel, she goes directly for the mother ship, the oft-imitated but never equaled Jane Austen. Why? Because Jane Austen is irresistible. Because you write the book you want to read. Because why let Paula Marantz Cohen have all the fun with Jane Austen in Boca, her recasting of Pride and Prejudice with Florida widows, or Jane Austen in Scarsdale, her transposition of Persuasion to college admissions in Westchester county?

So, another (at least nominally) Jewish twist on Austen. The alluringly alliterative The Three Weissmanns of Westport is actually Schine’s second novel set in the wealthy coastal suburb; the pink bookstore of The Love Letter (1995) was based on her hometown’s late lamented, aptly named Remarkable Book Shop.

When Joe says, “I want to be generous,” Betty rightly takes umbrage. “Generous? she thought. It was as if she were the maid and was being fired. Would he offer her two months’ salary?” She tells him, “You cannot be generous with what is mine.” Schine clinches the exchange: “And the divorce, like horses in a muddy race, their sides frothing, was off and running.”

And so, of course, is Schine’s novel. Just as Sense and Sensibility’s John Dashwood is convinced by his selfish wife to dislodge his stepmother and three stepsisters from Norland Park despite deathbed promises to his father that he would provide for them, Joseph Weissmann is convinced by his tough new paramour, Felicity, that the Weissmanns’ large, gracious Central Park West apartment is rightly his and that he shouldn’t burden Betty with its upkeep or the onerous taxes that would result from its sale.

With her credit cards canceled and no funds until the divorce is settled, Betty relies, like Austen’s displaced Dashwoods, on the kindness of friends and relatives. She retreats, heartsick, to a rundown cottage on Westport’s Compo Beach slated for teardown. Her two middle-aged daughters accompany her for solidarity. Their benefactor is Cousin Lou, a successful real estate developer — but not an entirely successful character — who’s never forgotten his origins as a W.W.II refugee. Annie Weissmann is the practical member of the trio, the family worrier, a long divorced librarian with two grown sons. Forty-nine-year-old Miranda, too inconstant in her emotions to have ever married, is a literary agent wed, in a sense, to her demanding “Awful Authors.” When it turns out that several of the memoirs she championed were fabricated — “fake cheesy lurid tragedy” — Miranda is vilified by the literary world and disgraced on Oprah.

Schine pokes fun at “sororal rage” and family dynamics revived from childhood as the three women cope with their new “genteel poverty” and meet potential suitors at magnanimous Cousin Lou’s weekly dinner parties. Miranda spurns the steady, quiet, semi-retired lawyer — Schine’s stand-in for Austen’s Colonel Brandon — instead falling in love with several unlikely candidates, and in the process discovering her inner nanny. One thing the author holds sacred is maternity. She writes, “No wonder people had children, [Miranda] thought. A child replaced art and work and culture.” When Annie’s sons turn up to brighten an otherwise dismal Thanksgiving, “Annie was so happy she felt ill.” But she registers sadness and resignation at the knowledge that, “though they would always be at the center of her life, she was no longer at the center of theirs.”

The novel is filled with zingers and riffs you can’t resist reading aloud — lines like “He was an actor, so he never had any work.” There are plenty of serious aperçus, as well. After being advised to hire a shark lawyer and a forensic accountant, Betty, newly taken during her “cottage arrest” with daytime television, observes, “A divorce was surely a kind of death: a murder, in fact. It was the memories, so stubbornly happy and lifeless and useless, stinking with decay, that lay in a putrid heap like a rotting corpse.”

As with Austen, the anticipation — even after multiple readings — of the pieces falling neatly into place is enormously satisfying, somewhat akin to the progression toward the harmonious resolution of a Bach Invention. I don’t recall ever shedding a tear when reading Sense and Sensibility, but I cried at the end of Schine’s novel. It’s not easy to be both funny and moving, and to write a conclusion that is both happy and sad. Schine pulls it off. This is a book I’ll urge on friends.

Previous Previous Post: "The Wilderness Idea"
Next Post: The Possessed: Adventures with Russian Books and the People who Read Them Next