The Unfeathered Bird: An Interview with Katrina van Grouw 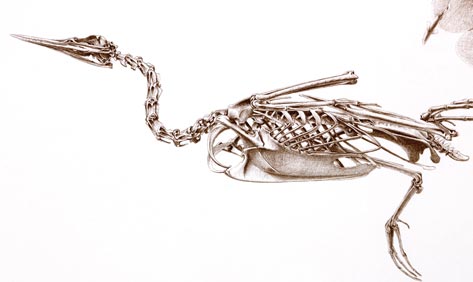 From the ancients to Audubon, there has been a special connection between the study of birds and the artist’s inspiration.  Katrina van Grouw’s majestic new book, The Unfeathered Bird — a masterpiece a quarter century in the making — offers a uniquely powerful example of this intersection of science and art.  Her title is a literal one: a taxidermist, former ornithological curator at London’s Natural History Museum, and fine artist, van Grouw reveals in 385 astonishing drawings the structures that lie hidden under the plumage of swans, parrots, owls, penguins and many other species both rare and common.  The result is a chronicle of arresting, sometimes unsettling beauty, matched with the author’s brief, informative essays.  We were so taken by her self-described “labor of love” that we asked Katrina van Grouw to tell us a little about a few of her drawings.  Click on the links below to see larger versions of each. 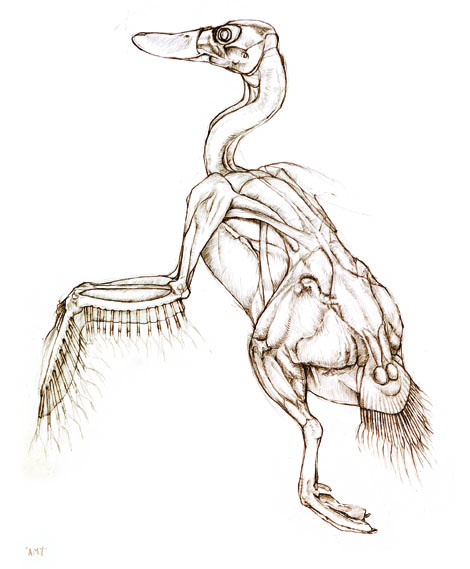 Mallard
I was an undergraduate Fine Art student when I first had the idea for the book that was to become The Unfeathered Bird. That was twenty-five years ago. My artwork was of living birds, and I was going through a Renaissance period, immersing myself in ornithological knowledge. I prepared study skins for museums, trained to become a bird bander, took part in banding expeditions to Africa and South America, and taught myself to clean and reconstruct bird skeletons. My first was a Mallard, which I christened Amy, and if you open The Unfeathered Bird at the beginning, you’ll see that the book is dedicated to her. I drew every part of that duck — the musculature; every bone from several angles; as well as the final articulated skeleton, which now stands in a glass case in my living room.

Many people might be surprised to find the arrangement of chapters based around Linnaeus’s Systema Naturae. There were several reasons for this, but it was chiefly so that I could compare similar adaptations in unrelated birds while still following a recognized (albeit antiquated) scientific order. For example, it enabled me to show the completely unrelated storks, herons, and cranes in the same chapter and talk about their differences and similarities in structure and lifestyle while sitting firmly on the fence about their evolutionary order. There is still no universally accepted bird classification that reflects actual relationships, and any modern taxonomy would have meant adhering to one or another school of thought. It was an unconventional decision and one that I lost a lot of sleep over!

>See a larger image of the Mallard 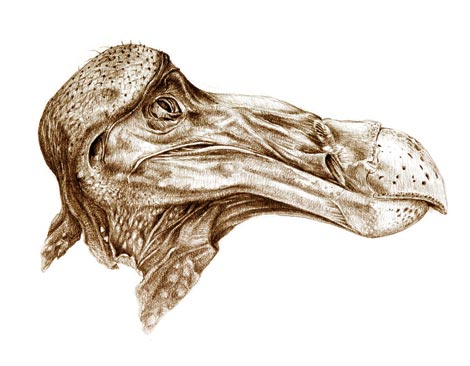 Head of a Dodo
I used museums for many of the drawings of individual skulls and for skeletons of species that I wasn’t able to obtain freshly dead — and of course for extinct species. This dried Dodo head from the Oxford University Museum of Natural History is the only one in existence in the world (all so-called stuffed Dodos are facsimiles, made out of chicken feathers glued on to a modeled body). I was always very strict about keeping my day job separate from my artwork, so I never drew specimens at the British Natural History Museum during the years that I was employed there. Instead I traveled to the museums in Paris, Brussels, Oxford, and Cambridge in my spare time. Most articulated museum skeletons, however, are not mounted in reliably lifelike positions, and certainly not in active or characteristic poses. For these it was necessary for me — in fact for my husband — to prepare specimens at home.

>See a larger image of the Head of a Dodo 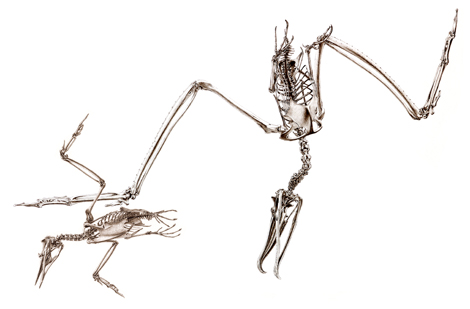 Magnificent Frigatebird and White-tailed Tropicbird
The greatest challenge was drawing skeletons in lifelike postures from bones that were not articulated; the ones in scientific reference collections in natural history museums. The scientists using these collections need to study the articulating surfaces of individual bones, so it’s important that they’re not glued or wired together. This makes it quite difficult for artists, however! I worked out quite a clever solution: I would draw the skeleton of another bird already prepared in the position I wanted, then rub out and redraw each bone in turn, with reference to the respective bone of the desired species. It works remarkably well, but you have to really know your birds. This Magnificent Frigatebird (my favorite image from the book) was drawn in this way, from a disarticulated skeleton lent to me by the Field Museum, Chicago, and modelled from the position of the Tropicbird it’s chasing. I’m a huge fan of both Frigatebirds and Tropicbirds (with feathers on), so it was important for me to get it right and do justice to the dynamism and excitement of a real-live aerial pursuit.

>See a larger image of the Frigatebird and Tropicbird 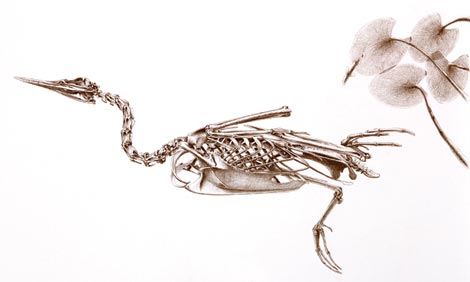 Red-throated Loon
No birds were harmed during the making of the book. I’m lucky enough to have a good network of colleagues who are taxidermists, vets, aviculturists, and conservationists and who were able to send me corpses of birds that had died of natural causes. My husband, Hein, prepared these as skeletons for me, allowing me to devote all my time to drawing and writing. Our tiny house was quickly taken over by specimens in various stages of preparation: pans boiling on the stove, bones drying in the china cabinet, a dead penguin in the bath, and a toucan in the sink! It soon became virtually impossible to move without knocking a beak or a tail off. Especially as I have the impractical habit of drawing everything life-sized. I had to crouch on the floor to draw this Red-throated Loon from an underwater perspective.

>See a larger image of the Red-throated Loon 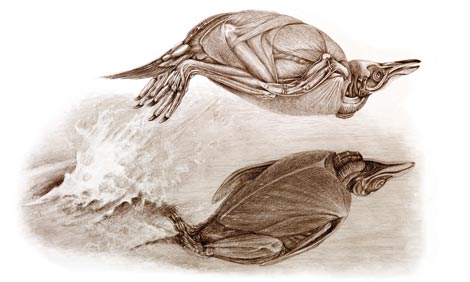 Gentoo Penguin
When I first had the idea for the book I’d intended it to be aimed primarily at artists and illustrators. Therefore I wanted to focus on the way a bird’s anatomy affects its outward appearance — what’s actually going on underneath the feathers when a bird is moving. It was only afterward that I realized that it would have wider appeal. My aim was to convey general principles about evolution and adaptation — to look through the wrong end of the binoculars, so to speak. So I deliberately chose postures that convey information about the birds’ lifestyle and how they’re adapted for it. What I wanted to avoid at all costs was annotated diagrams and the use of descriptive jargon, so I’m glad to see The Unfeathered Bird described as a coffee table book and not as a textbook!

>See a larger image of the Gentoo Penguin 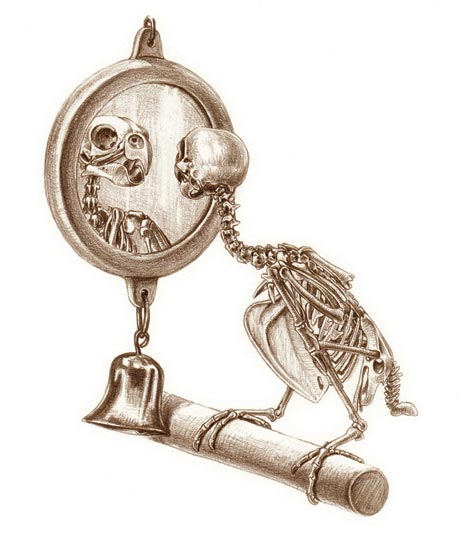 Budgerigar
In my opinion, there’s absolutely nothing wrong with having a little fun; especially when it also fulfils a constructive purpose. No matter how little you know about bird anatomy, the mirror in this drawing makes it obvious that you’re looking at a budgie. Some people might think this rather poor taste. But the mirror is not only there for humor — it shows the bird’s skull from two different angles. (That was exactly my purpose in showing the penguin’s reflection in the previous image, too). I wanted to incorporate as much information about the species as possible — including their habit in captivity of looking in mirrors!

In every respect — in the quality and presentation of the images as well as the book’s overall design — I tried to make The Unfeathered Bird a thing of beauty in itself; a real fusion of art and science, and accessible to all.

>See a larger image of the Budgerigar 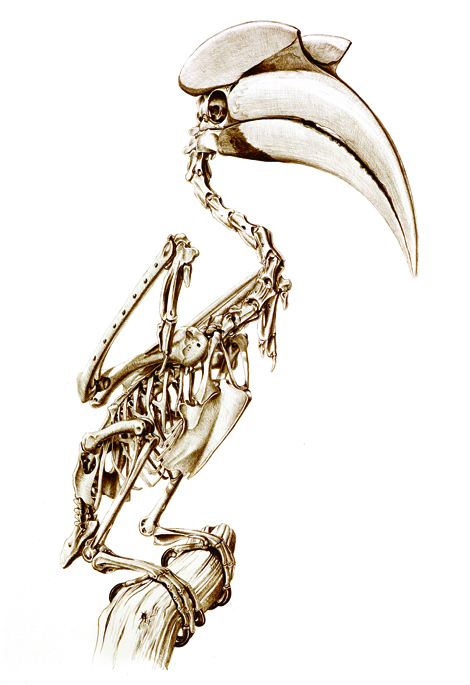 Great Hornbill
The original drawings are in pencil. However, I felt that gray tones would look rather dry and academic, so I adjusted the color digitally to that lovely warm sepia, and requested the cream-colored background to give them that slightly antiquated look, in keeping with the Linnaean theme. I’m a great fan of historical natural history illustrations and wanted the book to be suggestive of these but with up-to-date text that anyone can read. Not a facsimile of something old but a modern bird book equally at home on the bookshelf of a scientist or an artist.

My historical hero is actually John James Audubon. Indeed, it’s tempting to find parallels between the projects of The Birds of America and The Unfeathered Bird. Like mine, Audubon’s idea did not fit squarely into a niche — he had to fight for it, and believe in it. He worked life-sized, like me. He was uncompromising and pig-headed like me, and put his book before everything and everyone else — like me. Both books took over twenty years to come to fruition; Audubon had to get his published in England. I had to get mine published in America. Now, I’m definitely not saying I’m on a par with Audubon — but only that when the odds stacked up against me and I wanted to give it all up and just fall apart, I thought about Audubon and carried on.

>See a larger image of the Great Hornbill 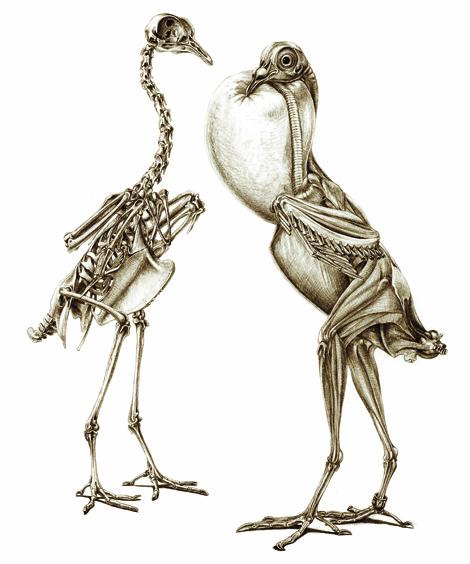 Pouter Pigeon
It was my husband’s brilliant idea to include domesticated birds. He’s a breeder of fancy pigeons (a pastime shared by Darwin) and has written several books on pigeon genetics. Most birders tend to be a bit snobbish about domesticated varieties, but my eyes were opened by just how radically their structure has been altered by selective breeding. It’s new and exciting territory, and will be the subject of my next book, Unnatural Selection, also to be published by Princeton University Press. Alongside pigeons, chickens, and ducks there will be rabbits, dogs, cats, horses — even canaries and goldfish! Think “What have we done to wolves to make bassets and bulldogs?” and you’ll have some idea of what to expect.

>See a larger image of the Pouter Pigeon

All illustrations from The Unfeathered Bird courtesy Katrina van Grouw.

Katrina van Grouw is a former curator of the ornithological collections at London’s Natural History Museum, a taxidermist, an experienced bird bander, a successful fine artist, and a graduate of the Royal College of Art. She is the author of Birds, a historical retrospective of bird art, published ender her maiden name, Katrina Cook. The creation of The Unfeathered Bird has been her lifetime’s ambition.

The B&N Podcast: Charlie Mackesy on our Book of the Year
Previous Previous Post: The "Monopoly" Monopoly
Next Post: Sugar in the Blood Next