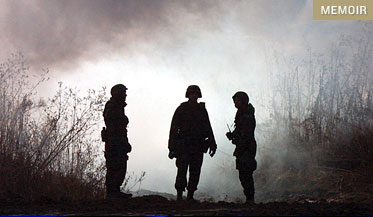 In my 20-year career as a sergeant in the U.S. Army, I gradually became aware of one timeless fact about military life: it’s an Us vs. Them war. The “Us” in this case are those who wear the uniform, the “Them” are the larger majority of the population who have never served in the armed forces and who don’t have a clue what it feels like to lie on your belly at a rifle range in the temple-throbbing heat, gravel digging into your elbows, helmet tipping onto the bridge of your nose while you squint through the sweat waiting for a pop-up target to show itself 300 meters in the hazy distance, with the clock ticking and the M-16 rifle, loaded with 40 rounds, heavy in your hands and the range’s safety instructors on the prowl, ready to thwack you on the helmet if your right leg is not cocked at a precise 45-degree angle; and all the time you’re wrestling with the sweat, the helmet and the suffocation, you’re aware this is only Stateside training — what will you do when faced with the real thing in Iraq or Afghanistan?

No, the average American worker sitting in a cubicle decorated with Dilbert cartoons and worrying about the price of his daughter’s orthodontics cannot fully appreciate what it’s like to lace up shin-high boots every morning and go to work in a profession whose ultimate goal is to “kill the enemy.” Then again, to be fair, I don’t know what it’s like to be a stockbroker, elementary school teacher, or logger. We’re all encapsulated in our particular worlds, boundaried by the limits of our experience.

Still, despite all the “Support the Troops” bumper stickers and the genuinely enthusiastic rallies in small communities as their sons and daughters march off to and come home from combat, there remains an almost geologic rift between those who fight and those who watch (and pray and worry). In the year I served in Iraq, I often struggled to bridge this gap of understanding in emails back home to well-meaning supporters. I could describe in detail what it felt like when terrorist mortars rained down on our camp at the outskirts of Baghdad and how a female soldier walking to dinner was hit by a stray shard of shrapnel and died from the resulting “sucking chest wound,” but I couldn’t make my correspondents empathize, only sympathize.

In his memoir of life as a young army officer, The Unforgiving Minute, Craig M. Mullaney makes a good attempt to build a bridge across this deep, dark canyon. If he’s not entirely successful in his execution, it’s hard to fault his intent. The book is subtitled “A Soldier’s Education,” but it could also serve as a primer for the non-uniformed sector of the reading public. Like many other combat accounts, from Audie Murphy’s To Hell and Back to Joel Turnipseed’s Baghdad Express, Mullaney’s book inches us a little closer to understanding life inside the uniform.

Mullaney, the son of blue-collar workers from Rhode Island, opens his story as he and his fellow 18-year-olds tumble off a bus “like a startled herd of wildebeest” for their first day of training at West Point. As the senior cadets bellow at the new trainees, Mullaney describes a hellish, intimidating world that lies just behind the military academy’s famed “Long Gray Line.” At West Point, Mullaney writes, “our purpose was to follow, to obey, and to be formed in the image of our leaders.” This induction, by turns, influences the rest of the book’s pages, which faintly smell of conformity, as if the author wishes not to offend those he writes about. Granted, there are a few individuals who come in for Mullaney’s criticism (including, most tellingly, his father, who abandons the family on the eve of his son’s deployment to Afghanistan), but for the most part this is a gung-ho, “band of brothers” account from an intelligent, eager young man doing his patriotic duty. Mullaney was raised to believe that “responsibility preceded privilege,” so it was almost a given that he’d join the military.

Though some initially join the military to pay back student loans (present company included), secure a steady-paying job, or avoid prison time (“go to war or go to jail,” runs a popular cadence refrain), Mullaney’s service is entangled with his Catholic upbringing. He sees it as a spiritual calling and writes that West Point’s educational experience “offered an almost religious quest for perfection?I wanted to graduate a better man.”

Whether or not a killing profession makes for a “better man” is open to debate, but what is clear in The Unforgiving Minute is the intensity of this one soldier’s experience. Mullaney takes the reader through a battering round of training regimens, including four years at West Point, Ranger School (where he completes the nine-week course with a dislocated shoulder), the Infantry Officer Basic Course, and Airborne School. The grueling indoctrination to the army is broken only by the time he spends as a Rhodes Scholar at Oxford.

His career as a lieutenant really begins when he’s assigned to the 1st Battalion, 87th Infantry Regiment of the 10th Mountain Division. The division’s motto, “We conquer men and mountains,” is soon put to the test as Mullaney and the rest of his unit are deployed to Afghanistan.

The fact that soldiering is no ordinary occupation becomes clear when Mullaney’s commanding officer tells him he and his men must always be ready to step into their comrades’ boots: “You have to assume you will be killed…or be ready to take over the company when I am. Make yourself dispensable.” Coming to grips with the fact that you’re a disposable number is not easy for a 24-year-old heading off to combat, but it’s a necessity in the army. Mullaney quickly learns how high the odds are stacked against him when he goes out on his first combat patrol and realizes the vast scope of area he and his men are assigned to protect. “I had roughly one soldier for every three thousand Afghans.”

The difficult mission is further exacerbated by Mullaney’s troubled conscience in the aftermath of the first time he fires at the enemy:

I was uneasy with the excitement I felt about shooting. Shouldn’t I have felt remorse at aiming live rounds at other people? Where was the clinical detachment? This had been raw and unfiltered?Discovering this killer instinct unnerved me, challenging my sense of humanity. I could kill — and I might even like it.

The Unforgiving Minute eventually builds to the moment for which we’ve waited nearly 300 pages: Mullaney’s baptism of fire. His personal Normandy comes on a windswept ridge within firing distance of Pakistan’s border. Responding to a mortar attack on their camp, he and his men probe the deep-gullied mountains in search of the rogue enemies with their rocket launchers. As his soldiers sweep the area, the hillside erupts “like camera bulbs at a concert” with fire from machine guns, antiaircraft guns, and rocket-propelled grenades. Mullaney’s platoon had walked straight into an ambush.

Though the account is breathlessly told, Mullaney holds his storytelling details at arm’s length, only seldom letting slip with sentences like “It was loud and chaotic, and I wanted to piss in my boots.” Unfortunately, the highest moment of drama in the book comes across like a PowerPoint debriefing; Mullaney divorces his head from his heart. Even when he later confesses to disillusionment with the mission, it’s done with tepid caution: “The futility of finding al-Qaeda by trial and error was by now clear to almost everyone. It was like throwing darts in a dark room. Sometimes we hit the bull’s-eye, but we didn’t deserve to.”

While The Unforgiving Minute may prove to be an eye-opening education for the majority of readers, especially those who stand on the other side of the canyon of military experience, it falls short of being a combat masterpiece. If you want a blow-by-blow account of an Army career, then this is the book for you. But if you want to see the resulting blood from those blows, start with Tim O’Brien’s If I Die in a Combat Zone or Anthony Swofford’s Jarhead, and patrol the jungle of war literature from there.