The View from the Bridge 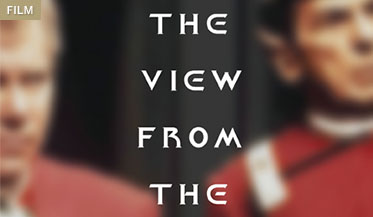 Nicholas Meyer is perhaps best known for gutting salvageable parts from the glum screenwriting junkyard of five crashed drafts and stitching together a fresh Frankenstein monster in twelve sleepless days. Sure, this was just a Star Trek movie, but considering that The Wrath of Khan is widely considered to be the best of the eleven films, Meyer’s last-minute labor puts the stone knives and bearskins of today’s savage script doctors to shame. In less than two weeks, Meyer fused such disparate elements as the death of a major character, a terraforming torpedo, a secret son sired by Kirk, a vengeful villain fond of quoting Melville and chewing scenery, a submarine-like space battle in the Mutara Nebula, and a young careerist Vulcan played by a fetching Kirstie Alley into what was quite possibly the best science fiction flick of the early 1980s. I realize that this is a bold claim to defend nearly three decades later. But this marvelous movie wowed every kid on my neighborhood block. Star Trek II not only revived a flagging series, but fired a shot across the Star Wars franchise’s bow and secured a fierce Star Wars/Star Trek feud that continues among fanboys to this very day. Even the most forgivable Trekkers knew at the time that the first movie was an unpardonable dog. But Khan raised the stakes. Darth Vader was Luke Skywalker’s father? But so what? Khan commanded mind-controlling eels to burrow into Chekhov’s ear!

Meyer’s highly entertaining memoir reveals that all this happened because he was “arrogantly uninterested in precedent.” Brought in at the last minute without a deal in place, Meyer believed that Gene Roddenberry’s utopian vision of Starfleet as a peacekeeping, intergalactic Coast Guard was a sham. And with Roddenberry ejected from development because of the first film’s cost overruns, Meyer was at liberty to tailor a taut nautical narrative with preexisting sets and a reduced budget.

What made Meyer the man for the job? Perhaps it was an early passion for movies and a knack for populist storytelling that spanned multiple media. Meyer was born in Manhattan and spent his childhood submerging himself in music and books, only to flee the city for the University of Iowa’s Writers’ Workshop. He became a movie reviewer for the school paper. Then he returned back east, trading in cafeteria meatballs for the ground chuck of writing press kits for Paramount. He then mined this experience for a behind-the-scenes movie book (The Love Story Story) and, like many young men, headed out west to try his luck as a screenwriter.

But Meyer would hit paydirt with a novel, not a screenplay. During the 1972 Writers Guild strike, Meyer banged out a Sherlock Holmes pastiche to keep himself occupied. The Seven Per-Cent Solution, which ended up becoming the third-best-selling novel of 1974 (just behind Benchley and Michener), featured the famed detective meeting up with Sigmund Freud in Vienna. It was a curious mix of melodramatic train chases and scholarly allusions, but it secured sales, acclaim, and a screenplay adaptation. Meyer later began work on Time After Time, a script shooting H. G. Wells and Jack the Ripper into 1979 San Francisco, and negotiated his way into the director’s chair.

Meyer’s directorial work was never visually ambitious, but it certainly respected the audience’s intelligence. His narrative engine purred along at a slow and steady four-square beat, unafraid to let the cash-guzzling blockbusters rush past with rash tugs at a moviegoer’s wallet. From its very beginning, Time After Time did away with the ugly and now forgotten “Big W” logo in favor of the classic Warner Brothers shield and Max Steiner’s score. The film’s first shot was photographed entirely from Jack the Ripper’s perspective, recalling Robert Montgomery’s eccentric film adaptation of Lady in the Lake. Meyer’s witty and gentle reinvention of H. G. Wells led to his now semi-legendary stint in the salt mines, turning Star Trek II into something more whole than its salinized parts. What followed was, if anything, more ambitious: The Day After, the infamous 1983 made-for-TV movie that drew 100 million viewers, devoted nearly an hour to midwestern backstory before bombs blighted out buildings and humans flashed into disembodied skeletons.

Meyer lets us know that along the way he wasn’t afraid to get pugilistic with top brass. He was nearly fired from Star Trek II. He stood up to ABC television executives (and received editing notes from the Reagan White House!) when they attempted to interfere with The Day After‘s realistic portrayal of nuclear war.

Some of Meyer’s claims for artistic integrity are less convincing. Though he cites his “hatred for the commercials that insistently interrupt the action on network television,” he remains strangely silent about an early and egregious bit of product placement in his 1985 film Volunteers. There’s one scene in a bamboo-built bar in which Tom Hanks offers Rita Wilson a bottle of Coke. Hanks lifts the bottle’s bottom, aligning it with the bottom edge of the frame. He gives it to Wilson. Wilson then holds up her upraised arm before the camera, as if Madison Avenue is watching, and guzzles it down with an avaricious gusto, crying out, “Oh God, that is fantastic!”

That moment stands in sharp contrast to Meyer’s brave fight with Standards and Practices only two years earlier over a vital teenage pregnancy scene and his austere showdown with a dying Gene Roddenberry to retain a flawed character in Star Trek VI: The Undiscovered Country. And there are other Holmes-worthy mysteries that Meyer stays mum on. Meyer reveals his role as script doctor for 1987’s Fatal Attraction and mentions that he had a problem with the film’s ending. So was Meyer the man responsible for the Hollywood-style bathtub-springing scene that replaced the more plausible suicidal finale? He doesn’t say. If he was, it seems hypocritical of him to complain about the executives who changed Star Trek II‘s ending to leave it open for a sequel. Meyer’s game to trash-talk Leonard Nimoy for taking story credit on Star Trek VI and he’s unafraid to reveal Gene Hackman’s boorish behavior on the set of Company Business. So why the diffidence?

Perhaps because he longs to direct again. Meyer was very good with actors, perhaps more than he anticipated. Aside from Ricardo Montalban’s indelible performance as Khan, it’s worth pointing out that Hanks and Wilson had such chemistry that they married three years after working on Volunteers. Malcolm McDowell likewise became smitten with his leading lady, Mary Steenburgen, during the filming of Time After Time.

Meyer also deserves more credit for his three enjoyable Sherlock Holmes pastiches and the noble cojones it took to get The Day After on network television. The latter move, in particular, would be unthinkable today. Meyer is right to point to passion and instinct being replaced with Hollywood bean counters and an obsession with demographic data. Meyer hasn’t so much written a volume offering a glimpse from the top. He offers a passionate view from the inside. And while Meyer may not be Arthur Miller, his creative crusading comes from the same honorable place.