The Wandering Gene and the Indian Princess 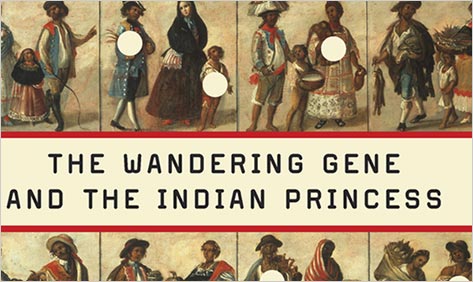 The Wandering Gene and the Indian Princess: Race, Religion and DNA spans continents and millennia but takes place largely in Colorado’s barren and impoverished San Luis Valley, which, author Jeff Wheelwright notes drily, is “not a place you would expect to find a flare-up of Jewish consciousness.” But the San Luis Valley is home to the Medinas, a large Hispano family of Spanish and Native American descent, and many of them have tested positive for the BRCA1.185delAG gene, the breast cancer mutation considered to be unambiguous evidence of Jewish ancestry.

The heart of Wheelwright’s alternately fascinating and painful book is Shonnie Medina, who was diagnosed with aggressive breast cancer at age twenty-six and dead by twenty-eight. What fascinates is the author’s account of how the Jewish marker first came to be and how it eventually showed up among the Catholics of the American Southwest. Scientists believe that the mutation, discovered in the mid-1990s, is 2,500 years old and that it entered the Israelite gene pool via a single founder. (Unlike recessive genes like those that cause the deadly Tay-Sachs, a rare genetic disease affecting Jews, this mutation acts alone, requiring only one parent to pass it down.) Wheelwright, a science journalist whose previous books were about the Exxon Valdez oil spill and illnesses afflicting Gulf War veterans, explains that in a bitter twist, some of the early Israelite strategies to survive in the face of oppression, including preserving “sacred separateness” and “blood purity,” led to genetic isolation and the concentration of the mutation. While 1 in 100 Ashkenazi Jews are thought to be carriers of 185delAG, it likely came to the San Luis Valley by way of Sephardic Jews who colonized what was then New Spain after being forced to convert to Catholicism during the Spanish Inquisition, beginning in the late fifteenth century.

The painful part of the book, of course, concerns Shonnie, whose DNA brought her toward her terrible fate but whose culture and temperament finished her off. “Marginal medicine” and “marginal religion,” Wheelwright writes, “swirl about the story of Shonnie Medina like two furies.” She and many of her relatives abandoned Catholicism and became Jehovah’s Witnesses in the 1980s. Shonnie was passionate about door-to-door evangelizing, and the booklet she carried with her on her home visits equated original sin to “a terrible inherited disease from which no one can escape.” Wheelwright suggests that the Witnesses’ apocalyptic beliefs and distrust of secular society (Shonnie’s father, Joseph, eschewed banks, instead burying cash in jars spread all over his property) contributed to the young woman’s decision to refuse surgery and chemotherapy. Vanity also played a role — she couldn’t accept the prospect of a mastectomy. Instead, she traveled five times to Tijuana for specious herbal therapies before her death in 1999.

As part of his research, Wheelwright spent considerable time with the extended Medina clan. He sat in on a Sunday afternoon session with a genetic counselor held at Shonnie’s parents’ restaurant in 2007; the counselor drove in from Colorado Springs to explain the science behind the mutation and to urge the gathered family members to undergo DNA testing. Two years later, the restaurant again played host, this time to the Hispano DNA Project, which, led by the head of the Human Genetics Program at New York University, collected blood samples from locals in an effort to amass more information about their genetic ancestry. By then the possibility of a “crypto-Jewish” community in the Valley had aroused interest from academics and the press. While some Hispanos in the area were skeptical, others, including some distant relatives of Shonnie’s, began to plumb their pasts, recalling grandparents quietly lighting candles on Friday nights or avoiding pork.

Wheelwright seems to admire the family’s willingness to confront the dangers presented by their DNA, but he is disheartened by their persistent faith in alternative therapies. He reports that three of Shonnie’s aunts shared an expensive “Bio-Enhancement Feedback Unit” machine among their households, convinced that the machine drew toxins out of their bodies. One of the aunts, who was treated for a lump in her breast solely by a nutritionist until finally agreeing to a belated mastectomy, died not long after.

The only parts of the book that fall flat are Wheelwright’s occasional attempts at lyricism, as when, describing a coming downpour, he writes, “Thunderstorm and lightning, the sky ejaculating, the airborne ancestors writhing in dark tumult.” Such passages feel forced, as if the author believed that his topic demanded more gravitas than his journalistic style alone could supply. But that clear-eyed journalism and his deft handling of so many different, complex strands — the science, the history, the stories of Shonnie and her family, thorny issues of race and religion — are Wheelwright’s real achievement.