In his piercing 2011 review of Welcome to the Greenhouse, an anthology of climate change fiction edited by Gordon van Gelder, Paolo Bacigalupi concluded his meditations on how much such science fiction could help remediate the world’s troubles by wondering whether SF itself had reached the end of the road: “My biggest fear as I turn the pages of this book is one left unspoken — that fiction itself is extinct. That in the future there will simply be no tale to tell.”

This mind-at-the-end-of-its-tether tone did not seem to condone defeatism or any throwing-in of the towel, at least for Bacigalupi himself. Since that review he has produced three books, one of which, The Drowned Cities, deals explicitly with issues congruent with those in van Gelder’s tome. But all three of those books were aimed at young adults; The Water Knife is Bacigalupi’s first novel for more mature audiences, covering his core theme of how our heirs might deal with a ruined environment.

Any reader following this insightful author’s career — which even before his award-winning debut novel, The Windup Girl, has focused on climate change, corporate malfeasance, public inattention, and sustainable technology — will approach this new book with high hopes to see if Bacigalupi has envisioned some new route through our global dilemma, some new reason for SF to go on existing.

What the reader will discover is no utopia. But it is not precisely a dystopia, either. It is simply a noirish portrait of a tough and exacting era, in which people maintain as best they can, with little energy or will left over for civilized niceties or do-gooding. Bacigalupi is not chronicling a descent into barbarism like the Mad Max scenario but rather a Water Wars Depression, a harrowing of the flesh, engineered by nature with the assistance of human cupidity and stupidity.

The time frame is the indeterminate near future, as the American West and Southwest, along with an offstage Mexico, struggle to survive the drastic diminishment of all water resources. Rivers run shallow, rain does not come, aquifers go dry. Cities are hollowed out, refugees hit the road, and the rich end up in sustainable arcologies, vast hermetic structures whose luxurious interiors rely on recycling, conservation — and the ruthless, quasi-legal arrogation of any and all water rights.

Three viewpoint characters allow us to witness the various social strata and desperate machinations of this future.

Angel Velasquez is the “water knife” of the title, a canny, deadly catspaw for Catherine Case, the queen of Nevada water dealings. Next is Lucy Monroe, a freelance Internet journalist chronicling the slow demise of Phoenix, Arizona. Last, we come upon Maria Villarosa, one of the proles struggling to make it from day to day.

The book opens with a thrilling, slam-bang set piece: Angel’s military takedown of one of Case’s rivals, the municipality of Carver City that has water Case needs for her own Vegas projects. This chapter drags the reader headlong into the dusty, dog-eat-dog future. Chapter 2 digs into Lucy’s somewhat dicey life, which is going to go even further off the rails. Chapter 3 shows us Maria, hustling to make a buck by cleverly parlaying a few dollars on the amateur water futures market.

All three milieus are conveyed in slangy, taut language, full of sensory cues that deeply embed the reader in the altered realities of this scrabbling, hard-luck, at times almost Ballardian environment. “In the end it was always the same: traffic lights swinging blind on tumbleweed streets; shadowy echoing shopping malls with shattered window displays; golf courses drifted with sand and spiked with dead stick trees.”

Bacigalupi is in cyberpunk mode here, in a novel whose very title conjures up assonance with Blade Runner. When he’s not taking us up to the sterile boardrooms where the deals are made, he’s stalking the blood-puddled streets where the nasty stuff goes down and technology finds its unanticipated niches. The viability of the cyberpunk attitude and suite of speculative tools, fashioned by William Gibson and his peers, proves itself all over again in Bacigalupi’s able grip. (And please note the surname Case as a possible tribute to Neuromancer‘s seminal cyber-cowboy.) 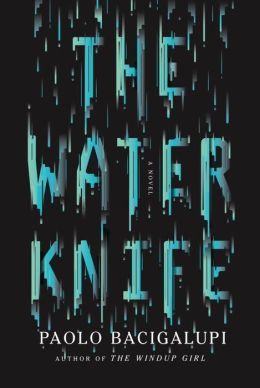 Bacigalupi keeps his three protagonists on separate tracks until circumstances cause them to converge. Angel is in Phoenix, investigating the death of someone for his employer, and meets Lucy at the morgue. He immediately senses her entanglement in the affairs that interest him and wrangles a tense meeting with her. This gives Bacigalupi a chance to emulate Hammett or Chandler with clever accuracy, mutatis mutandis. Although Angel is certainly no tarnished knight like Spade or Marlowe, his dialogue with Lucy here evokes the barbed Black Mask banter of those two writers and their literary school.

Lucy and Angel will form a reluctant alliance built on a quicksand compounded of love and hate, mutual respect and suspicion, in order to solve the central, Chinatown–esque MacGuffin of the novel — the whereabouts of some up-for-grabs “water rights older than God” — and in order to stop people from trying to kill them.

Bacigalupi of course does not stint in his world-building. His reinvigoration of that great trope the arcology, or city-within-a-building, is vigorously pursued. And who else could imagine “Johnnytrucks” that circulate with tinkling chimes to allow citizens without toilets to get some relief?

There’s a big streak of the cosmopolitan world-weariness and underdog perspective of the late, lamented Lucius Shepard here. But Bacigalupi has in mind another classic author who plumbed a similar vein, at least for a while. That would be John Brunner, whose quartet of monitory, info-dense, jacked-in novels — Stand on Zanzibar; The Sheep Look Up; The Jagged Orbit; and The Shockwave Rider — remain unparalleled examples of engaged and cautionary novels meant to forestall the very dangers they limn.

Bacigalupi’s return to this type of tale in an adult setting — and reader beware, there are some shocking scenes of violence here — is no Kim Stanley Robinson foray into “We Shall Overcome” territory. If the book evokes any anthem, it’s the Police’s “When the World Is Running Down, You Make the Best of What’s Still Around.”

Yet if this is as “cheerful” as Bacigalupi can get about our future, then we should all be very glad he still stands tall, willing to declaim his vision so artfully, and with such force.