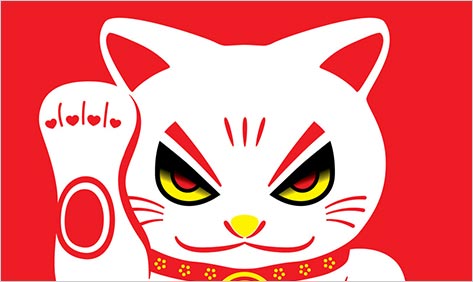 Tragedy is easy, comedy is hard.  But why?

The constituents of tragedy may be universally acknowledged, easily invoked and deeply felt, but the elements of comedy are, I think, more widely variable from person to person.  The three touchstones that woke Buddha up — sickness, old age, and death — are a pretty good place to start when crafting a tragic tale.  And if we need to get more specific:  heartbreak, destruction, miscomprehension, natural disasters, betrayal, and the waste of human potential.

Of course, there are always amiable cynics, such as Oscar Wilde, who deny any pathos — or at least any inaesthetic pathos.  “One must have a heart of stone to read the death of little Nell without laughing.”

But with comedy, the situations that amuse me might leave you cold.  Sure, theories of humor discern a few broad invariants:  incongruity, misattribution, etc.  But whereas I might find a blind date gone horribly wrong to be hilarious, you might just wince and avert your eyes.  I’m shedding tears of joy at the antics of the Three Stooges, while you’re waiting in bored impatience for the slapfest to run its course. (And we all know people who have no discernible sense of humor at all.)

Finally, when it comes to fiction, it seems to me that tragedy is a blunt and heavy weapon — a cudgel, a board with a spike in it, an atomic bomb that is rather easy to deploy — whereas literary comedy is a rapier, one that requires rather more finesse and subtlety to wield effectively. All of which goes to partly explain why there is relatively little comic science fiction, horror, and fantasy.  Quite often intent on conveying how things can go wrong for a culture (science fiction) or an individual (horror) or all of magical creation (fantasy), works of fantastika often preclude comedy, because humor gets in the way of messages of doom or struggle.

But this is not to say that comedy in fantastical literature does not have a long and honorable pedigree of laughs that starts with Victorian writers such as E. Nesbit and F. Anstey; moves on in the 1930s and 1940s to Thorne Smith and de Camp & Pratt; then in the 1950s to William Tenn and Robert Sheckley; Ron Goulart in the 1960s; and afterward, Douglas Adams, Terry Pratchett, and Tom Holt, just to name a few.  As the Science Fiction Encyclopedia says, it is ” a false belief that SF and humor do not mix.”

Arriving as a practitioner of such supernatural humor, loaded with brio, wit, and sophisticated jollity, like the literary godchild of Max Barry, Christopher Moore, and Will Self,  comes Jeremy Bushnell with The Weirdness.  This debut novel is nominally a “deal with the devil” story, a hoary trope whose every ramification was deemed to have been previously explored, so much so that many genre magazine editors exhibit an automatic prohibition against such tales.  But Bushnell triumphs over any such overbroad editorial ukase and fannish doubts with enough surprising twists and satire of contemporary persons, mores, and foibles to reboot the whole iconography.

Our hero is one Billy Ridgway, consummate screw-up.  Thirty years old, an aspiring fiction writer working in a sandwich shop, Billy has managed to sabotage his own future with a series of bad choices, snarky behavior, laziness, apathy and general ineptitude.  Just when he thinks not much worse can happen to him in his miserable life, he experiences an “Adversarial Manifestation.”  The Devil — a dapper, self-possessed, cosmopolitan fellow with gourmet tastes in coffee; not scary at all, really — appears unbidden in Billy’s apartment and offers him a deal.  No souls are involved in the transaction.  The Devil just needs a small favor, and in return will ensure that Billy becomes a well-received, published novelist.  What the Devil asks is that Billy enter the Manhattan stronghold of a powerful warlock, retrieve something the mage stole, and return the prize to the Devil.  Oh, yes, if Billy doesn’t act soon, the warlock’s tampering with the MacGuffin — one of those Chinese Good Luck Cat Statues — will destroy the entire world.

Billy cycles through what might be termed the Five Stages of Supernatural Disbelief over the course of the next day or two.  Days that are packed — amusingly for the reader and embarrassingly for Billy — with mundane events such as literary feuds, girlfriend troubles, and paternal annoyances.  But eventually, with no real recourse, Billy accepts the commission, which is sealed by the smoking of a large, magical cigar in the back room of a Williamsburg crêperie.

At this point, roughly halfway through the book, veteran readers might very well imagine they can see what’s coming.  But Bushnell has so many clever twists in hand, including an earlier-than-anticipated meeting with Timothy Ollard (the bad warlock), that one compulsively devours the pages for the next startling revelation and/or transfiguration.

Bushnell’s book is superbly constructed on two levels: the micro and macro.  First comes his prose, a crisp, unlabored, and invigorating mix of colorful quotidian details with hyperbole and vivid magical SFX.  Like Lev Grossman with his modern wizards, Bushnell wisely and firmly grounds us in the grungy, shabby, pathetic reality of Billy’s life before bringing in the supernatural.  Bushnell has the slacker/millennial/hipster lifestyle pegged down tight.  He depicts Billy’s character in a way that elicits both sympathy and disdain, rendering Billy as neither fully heroic nor fully venal, but rather the essential human composite of good and bad.  Billy’s eccentric compadres get a similar fleshing out:I’m reminded of the gang of amiable losers in Bob Fingerman’s great graphic novel, Minimum Wage.  Late to the page, but critical in her role, is Elisa Mastic, punk poet, who proves to have a curious affinity with Billy.  And of course the Devil himself exhibits a beguiling mix of infernal unknowability with mortal quirks:  “Should someone choose to write my story, I hope the author will take time to mention that my entire existence really was characterized by my being profoundly, uniquely misunderstood.”

And along with the sharp, funny, slightly off-kilter dialogue and wry observations that Billy makes come some great gonzo metaphors, sprinkled just perfectly in the text so as not to become obnoxious.  Billy’s gone-to-sleep leg has been “transformed from trusty appendage to strange tube packed full of cast-off meats, like a long sack of dog food stuck to his body.”

On the plotting level, Bushnell’s pacing is deft, and his ability to stagger multiple small climaxes throughout the story before hitting us with the large, emotionally resonant one makes for an engaging reading experience.  And that big, ultimate manifestation of the occult is delivered with utter panache and convincing widescreen, um, weirdness.  This sincerity of this ending, along with the smart coda, proves Bushnell is no half-hearted magical realist or dabbler in trendy interstitial allegory, but rather a full-fledged, proudly non-mimetic genre fabulist, a living disproof to the absurd contention that comedy in fiction cannot produce a work of gravitas with a red clown nose firmly in place.

One almost suspects, from Bushnell’s triumph, that he’s made his own Robert Johnson at the crossroads deal with Old Scratch himself.