The Whole Difference: The Selected Writings of Hugo von Hofmannsthal 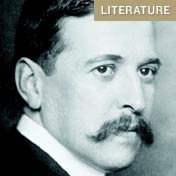 While familiar, perhaps, to opera buffs as Richard Strauss’ librettist, one assumes that for most English-language readers the name Hugo von Hofmannsthal (1874–1929), like that of his compatriot Karl Kraus, looms like a partially buried talisman — nominally familiar, but only that. This is lamentable because Hofmannsthal was one of the major writers of his time. As a teenager, he erupted upon Viennese literary society as a lyric poet some hailed as the spiritual successor to Goethe. But over time, he left many of his early admirers dejected as he steered away from poetry to try his pen at other creative ventures. Qualitatively speaking, the trajectory of the works brought together in The Whole Difference: The Selected Writings of Hugo von Hofmannsthal — edited by the poet, critic, and president of the American Academy of Arts and Letters, J. D. McClatchy — reinforce the arc of Hofmannsthal’s critical reception. The first half of the anthology offers an invigorating selection of Hofmannsthal’s poetry, short stories, and essays on figures such as Shakespeare, Balzac, and Wilde. The writing here is panoramic; I found myself making frequent annotations beside many sentences such as this: “There is something lyrical about the dress of a whore and something commonplace about the emotions of a lyric poet.” Unfortunately, the enthusiasm that’s likely to spur on any reader drawn to beautifully governed writing faces a daunting slug during the second half of the book, which is given over to two plays, The Difficult Man and The Tower. The former is a comedy of errors, not particularly funny, and the latter is a tragedy composed in a neoclassical vein about a king’s futile effort to elude a fatal prophecy. The Tower‘s main failing is that exchanges between the characters rarely coalesce to give the impression that they are speaking in anything but a vacuum. As disappointing as these last selections are, they are recompensed by the earlier selections, whose vim is incorruptible.