Why read new biographies of familiar, much-studied figures? The answer, as evidenced by David McCullough’s latest book, often lies less in new information than in fresh perspective. The Wright Brothers, an engaging retelling of how the inventive, hardworking Ohio siblings literally got their ideas off the ground, indirectly offers insights into today’s fascination with innovation and technology. 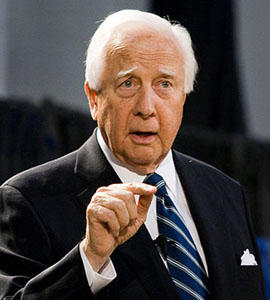 Plenty of biographers unearth interesting facts, but the best animate their subjects by shaping information into compelling narratives that capture the arc and spark of lives while making a case for enduring significance. More reliably than almost any other working biographer, McCullough delivers taut, lively narratives, even if it means minimizing some issues. His books about John Adams and Harry Truman earned Pulitzer Prizes. The Path Between the Seas (about the building of the Panama Canal) and Mornings on Horseback (about Teddy Roosevelt) both received National Book Awards.

With The Wright Brothers, McCullough in no way upends Wright scholarship. Instead, at a time when digital-world figures like Steve Jobs, Mark Zuckerberg, and Bill Gates are alternately lionized and vilified, he paints a glowing testament to diligence, dignity, and drive, as if to say, You want to see grit and grace?  Look at this. In contrast to Walter Isaacson’s intimate but critical — and somewhat controversial — warts-and-all portrayal of Apple founder Jobs, McCullough’s adulatory depiction of Wilbur and Orville Wright reveals barely a blemish. 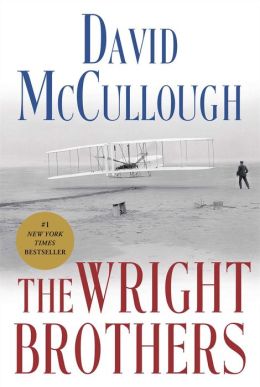 In fact, the saintly picture that emerges of this self-taught, industrious duo coincides to a startling degree with the hagiographies I read about them in grade school — which I had assumed were whitewashed propaganda for good behavior and hard work. Ever the skeptic, I still can’t help wondering what we aren’t being told. (Could it be true that these lifelong bachelors’ only romances were with biplanes?)

What we are told is a surprisingly moving and, yes, inspirational yarn about two inordinately close brothers, born four years apart in Dayton, Ohio, who shared a dream of flying.  Neither went to college. Wilbur, the elder and arguably more brilliant, was born in 1867 and had his dreams of Yale smashed, along with his jaw and front teeth, by a local bully wielding a hockey stick, a man who was eventually convicted of multiple murders. Instead of heading off to New Haven, Wilbur withdrew from the world into an intensive, self-driven three-year reading course that encompassed classics and physics. McCullough suggests that this biographical swerve changed the course of history. (The same could be argued for Steve Jobs’s dropping out of Reed College.) Although the Wrights lived in a modest house without indoor plumbing, electricity, or telephone, their father, an itinerant clergyman, valued intellectual curiosity, hard work, and good books.

Interestingly, Wilbur and Orville’s only sister, Katharine Wright, the youngest of Susan and Milton Wright’s five children, was also the only Wright to attend college, at Oberlin. She taught Latin in the local high school for years while running the family household after their mother died of tuberculosis in 1889 (though both Wilbur and Orville liked to cook). McCullough stresses not only Katharine’s crucial role in Wilbur and Orville’s success but the importance of all three siblings’ intelligence, self-assurance, and verbal acumen (both written and oral) in advancing their work. His book relies heavily on their diligently kept diaries and voluminous correspondence to convey their fortitude and humor.

To support themselves, Wilbur and Orville hopped on the growing craze for bicycles, opening a shop that sold, repaired, and eventually designed and built bikes. But increasingly, their focus turned to solving the problem of flight — a challenge they approached by studying birds, books on physics and aerodynamics, and, most of all, hands-on experimentation. Preferring full control, they funded their early gliders, biplanes, engines, propellers, and test flights with modest savings from their bicycle business. Their nose-to-the-grindstone attitude led to long six-day weeks — but never seven — even when the Wrights were pressed by clamorous crowds; Sundays were for reading and resting.

The Wright Brothers extends McCullough’s inquiry into the relationship between people and technology begun in The Great Bridge (about the Brooklyn Bridge’s construction) and his Panama Canal book. It follows his most recent book, The Greater Journey, about Americans in Paris in the nineteenth century, with a glimpse of France in the early twentieth century, a time of peace. This is when the Wright brothers, who didn’t anticipate their invention’s devastating wartime uses, marketed their flying machine abroad after the United States Army’s initial indifference.

McCullough vividly evokes the burgeoning manufacturing town of Dayton, in contrast to the desolate, sand-swept beachscape of Kill Devil Hills and the nearest settlement, Kitty Hawk, on North Carolina’s Outer Banks. He also captures the brothers’ long, gaunt figures, formally clad in high white collars whether manning metal lathes or airplane rudders. Even more impressive, he manages to build suspense for each of their many early test glides and flights.

And, when the brothers finally soar, McCullough revels in the excitement and subsequent fanfare. Describing the scene at Wilbur’s momentous first exhibition flight on “the eighth day of the eighth month of the eighth year of the new century” in Le Mans, France, McCullough writes:

Those in the crowd who had brought field glasses had seen how he twisted the wings as he turned and rounded corners as naturally as though he were on a bicycle. Very near the point where he had started, he made another perfect turn to fly full circle once again, all at about 30 to 35 feet, before coming down to a gentle landing within 50 feet from where he had taken off. In all he was in the air not quite two minutes and covered a distance of two miles.

The crowd was ecstatic, cheering, shouting, hardly able to believe what they had seen.

In part because McCullough is a biographer who avoids speculation and commentary, The Wright Brothers leaves several issues hanging. Regarding the brothers’ lifelong celibacy, he quotes a remark comparing them to monks in their total devotion to their work. Yet Orville was “furious and inconsolable” when Katharine left him in 1926 at age fifty-eight (fourteen years after Wilbur’s death from typhoid at forty-five) to marry a widowed Oberlin classmate. He refused to attend her wedding and nearly boycotted her deathbed two years later. (She died of pneumonia.) To dismiss this behavior as just one of his “peculiar spells” seems inadequate.

McCullough downplays the brothers’ sharp-elbowed competitiveness with other aeronautical entrepreneurs, which flared in the presence of unauthorized photographers at their early demonstrations and in their embroilment in numerous lawsuits protecting the patents they were savvy enough to file for in 1903. He claims they were more concerned with receiving proper credit for their ideas than with remuneration, and that they certainly had no intention of impeding progress. He also notes that they won every case in American courts. Although they eventually made plenty of money, McCullough points out that the amounts were modest by titan standards.

McCullough also soft-pedals others’ successful experiments with flying –which leads to some surprise when he finally mentions the rush of achievements of early French aviators, including Louis Blériot’s 1909 flight across the English Channel in a “frail, underpowered monoplane, his No. XI.” The perennially contested issue of who was first in flight resurfaced again this year, with arguments that an American named Gustave Whitehead flew his own powered plane in Connecticut in 1901 — well before the Wrights’ much-celebrated December 17, 1903 flight in North Carolina.

The Wright Brothers is — dare I say it — an uplifting reminder that success lies not just in achievements but in how you respond to setbacks. (Again, readers can draw parallels with Steve Jobs’s unhappy exile from and triumphant return to Apple.) McCullough’s book makes it clear that, after numerous crashing (but never crushing) disappointments, Wilbur and Orville Wright were champions of picking themselves up, dusting themselves off, and starting all over again — a valuable model for would-be creators of any new era.