By LUDMILLA PETRUSHEVSKAYA, translated by KEITH GESSEN and ANNA SUMMERS 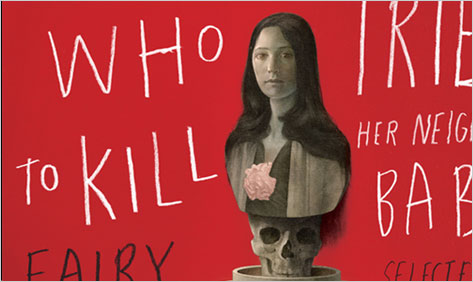 The first story of Ludmilla Petrushevskaya’s new collection, There Once Lived a Woman Who Tried to Kill Her Neighbor’s Baby, contains, in its mere six pages: a prophetic dream, an unearthed coffin, a decimated military unit, and a “charred stump” of flesh rolling about the floor of an unstable airplane.  Lest there be any doubt, we’re in Russia.

Petrushevskaya has long been considered one of the preeminent authors to have emerged from Soviet Russia — her work was banned until the Soviet Union unraveled — but for whatever reason, she has been little translated into English until now.  Her translators, Anna Summers and Keith Gessen, take pains in their introduction to make sure new readers are aware of her status as one of the contemporary greats: “With the death of Solzhenitsyn, it would not be an exaggeration to say that Petrushevskaya is Russia’s best-known living writer,” they write.  They’re not wrong, but neither are the stories they’ve picked the most convincing evidence.

At the center of Petrushevskaya’s universe are women.  In her novel The Time: Night and the seminal story “Our Crowd,” the home becomes a theater of war as sexual jealousy, familial resentment, and profound self-deception fuse to create a conflagration behind closed doors.  At their most forceful, Petrushevskaya’s women adopt — not without irony — the pose of the “superfluous man,” that stock figure of Dostoevskian alienation.  In There Once Lived a Woman Who Tried to Kill Her Neighbor’s Baby, by contrast, the gritty life of Soviet and post-Soviet Russia shares a hazy boundary with a place even further still — the dream-states and netherworlds of the supernatural. (I’ll refer to the collection as Neighbor’s Baby henceforth, since the title, like Petrushevskaya’s name, is a mouthful.)

To return to the charred stump:  In the opening story, “The Arm,” a colonel rushes home from the war hoping to see his sick wife before she dies, only to miss her by an hour.  Naturally, he disobeys his wife’s command not to unveil her in her coffin; from here on out, things get weird.  His concerns about the rickety flight back to camp meet with unsatisfactory replies. “[T]he pilot explained that his navigator usually cleaned up, but he’d just been killed.  And right away he started lugging the charred stump off the plane, saying, ‘There he is, my navigator.'”  (Petrushevskaya’s humor is of a particularly dark shade.)  As the colonel shivers in the cold, a mysterious woman with the voice of the colonel’s wife chides him for lifting her veil.  “Now your arm is going to wither,” she prophesies.  Sure enough, he wakes in a hospital with his arm destined for amputation.

The story is just a taste of what follows, but it contains what proves to be the collection’s most  abiding feature – startling shifts between realities about which, all things considered, the characters seem relatively blasé.  In “A New Soul,” one of the more surreal stories, a man wakes up without warning in America “in the form of an unhappy immigrant named Grisha, who’s been abandoned by his hardworking wife six months after they arrived in the States.”  There, crushed by an unplaceable grief and unaware of the other man’s soul living within him, Grisha meets his landlady’s widowed cousin, the former wife of the man now occupying his body.  “It was,” Petrushevskaya writes, “a genuine double recognition: two souls met and didn’t know it.”  They marry, and the widow follows Grisha “to the place where her first husband’s soul now lived — and no one ever did explain it to either of them.”  It is this adaptability to the ever-changing whims of fortune that defines Neighbor’s Baby.  What is most shocking is just how unshocked her characters are by the changing face of their realities — they accommodate themselves, unperturbed, to the strange forces at work.

Gessen and Summers suggest in their introduction that the collection bears a debt to Greek mythology of the underworld, and in “The Arm,” the nod to the Orpheus is especially conspicuous.  Common to many of the stories, they note, is some sort of journey — physical or otherwise — into an underworld, a world beyond the surface of what is seen.  In “A New Soul,” the journey is as much metaphysical as it is geographical: Grisha’s body becomes the unlikely vessel of a spiritually complete afterlife.

Yet often, for all the flights of imagination, it is the surface world that is the more interesting.  Petrushevskaya’s eye for the hardships of Russian life is unerring, and often, the gripping trials of the day-to-day draw out her best writing.  In “Revenge,” the story from which the collection takes its title, the friendship of two neighbors takes a turn into horror when one of them has a baby.  (Child rearing has always been at best an ambivalent affair in Petrushevskaya’s writing.)  “Consumed with hatred” at the intrusion of a new life into their shared existence, Raya refuses to help her former friend or to even look at the baby.  As Zina tries to navigate the challenges of motherhood, Raya “was planning the girl’s murder.”  The matter-of-factness of this statement comes as a surprise, despite having been presaged by the title.  Armed with steaming kettles and bleach, Raya sets out kill the child.  It’s a grim scenario, but one that Petrushevskaya, with characteristic subtlety, renders plausible.  She operates by elision, letting the emotions that drive her stories seethe somewhere far from the page.  “Revenge” is all spare action.

Like those of the Brothers Grimm, Petrushevskaya’s “scary fairy tales” — as the collection’s subtitle labels them — don’t necessarily assume the realm of myth to be any more generous than our own.  But as furiously inventive as these stories are, to be whisked from the downtrodden streets of Petrushevskaya’s Russia is, against all odds, to feel cheated.  When she grounds her work in realism, her penchant for the slow build of understatement works, because her social landscape, unlike the fantastical, is familiar enough that we understand what is not being said.  Some of the stories here achieve the power that her novel does — “The Miracle,” the aforementioned “Revenge” — but others seem ephemeral by comparison.  Even in the face of her own quixotic imagination, Petrushevskaya has outmatched herself.  It’s not the fables don’t satisfy — they do — but rather that, with so few contemporary Russian authors making their way into English translation, Neighbor’s Baby makes for a queer introduction.  Without realizing it, Petrushevskaya diagnoses her own malady: “It was in a dream, though, that it happened, and dreams don’t count.”