A lifetime of reading — in the family, and otherwise. 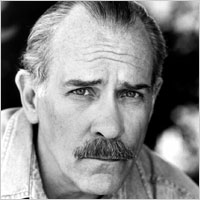 Cinematographer, photojournalist, and author Thomas Steinbeck, like his father John, has brought his Monterey, California home to life in fiction – first through the critically acclaimed short stories of Down to a Soundless Sea, and now in his new novel, In the Shadow of the Cypress. When we asked the writer to share three of his favorite books, he told us:

“For someone who loves literature, and all books on principle, being asked to name three titles over a half century of serious reading is akin to asking one to recall their three favorite sunsets. However, I can name three books that substantially expanded my view of the world at the time I read them, which in all three cases was many years ago. I have re-read all three titles several times since, and I flatter myself with the knowledge that as I matured, all three books only got better.”

“When I was fifteen my father gave me a first edition copy of Ray Bradbury’s magnificent work, The Martian Chronicles. I had read other science fiction by noted authors, but this book was something else altogether. This was poetry that elucidated a marvelous portrait of human possibilities, still hobbled by human limitations to be sure, but bright with potential wisdom for those willing to be guided by compassion and not reason. Bradbury’s seminal work opened my eyes to a surfeit of cultural similarities right here on earth, and led me to wonder what right mankind had to colonize Mars, and therefore become the Martians they so long imagined, when they really hadn’t learned how to become proper Earthlings yet. This was pretty heady stuff for a fifteen-year-old boy. Yet Bradbury’s influence has remained fixed, and I still hold the same opinion today.”

“I was eighteen when I first read Joseph Heller’s stunning work Catch-22, and was at that time close to being drafted for the fruitless and unenlightened war in Viet Nam. I confess that at first I thought Catch-22 was a marvelous and brilliantly constructed work of surrealistic fancy, until I at last landed in the heart of the war myself. Once in combat in Viet Nam, I came to realize, to my utter surprise and consternation, that Heller’s vision of military chaos, criminal greed, institutional stupidity, group insanity, and pointless violence were all true, and real, and very frightening. It was all there exactly as Joseph Heller described, and unfortunately I was Yossarian. I have since re-read the book six times, and it still invokes profound images that have the power to generate profound laughter and stark terror in the same paragraph. And I can say without fear of contradiction that, had it not been for Joseph Heller preparing the way with ample warning, I might have gone mad in Viet Nam myself. However, I’m told the jury is still out on any presumption of my sanity.”

The Moon is Down

“When I returned to Viet Nam and Southeast Asia as a freelance journalist and two-bit stringer, I had the opportunity to study the only book my father authored that I had not read before. It was a little known work that he had penned during WWII. It was titled The Moon is Down, and it was the story of the German occupation of a peaceful Norwegian mining town, and the steps taken by the locals to deal with this assault on their liberties after hundreds of years of peace. Having been technically a soldier of occupation myself, I was fascinated with the way Steinbeck portrayed the German soldiers in his story. He extends his sense of compassion to their plight as well, when he suggests that living and working in an atmosphere of universal hatred can be a soul withering experience for anyone, small town German boys especially. Having been a Visigoth on the streets of Rome, I could easily understand how that must have felt. And in that context, when Steinbeck says of the German occupation, ‘that the flies have conquered the flypaper,’ it speaks volumes about every war of occupation I have ever studied. This unique little book changed my whole perspective concerning the conflict in Viet Nam, and I began to question why a people so lavished with personal liberty were dead set on denying those same blessings to others on the grounds of political expediency. As Steinbeck so aptly expressed, ‘if one must draw blood to make a point, then the argument has been poorly constructed and badly applied.'”