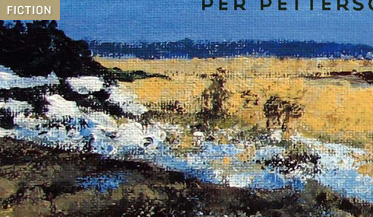 If the aim of fiction is to so completely engross readers that they’re transported by words and grafted into the lives of fabricated people, then Per Petterson has perfected the art of spellbinding literature. You don’t just read his novels of Nordic life, you experience them.

His Out Stealing Horses, winner of the 2007 International IMPAC Dublin Literary Award, captivated readers with its story of a Norwegian widower unpeeling the memories of a tragic past. The novel had all the earmarks of great literature: spare, lucid prose; vibrant characters; wrenching emotional depth; a page-turning plot. Though he’d been publishing fiction in Norway for a decade, Out Stealing Horses catapulted Petterson onto the American literary scene. He has rightfully drawn comparisons to Ernest Hemingway, Cormac McCarthy, Willa Cather, and William Faulkner.

Now Graywolf Press has brought one of Petterson’s earlier novels to U.S. shores. To Siberia, translated by Anne Born, tells the story of a young girl — never named — who comes of age during the German occupation of Denmark. Though its plot doesn’t have the dramatic heft of Out Stealing Horses, this rhythmically lyrical novel, originally published in 1996, is just as distinctly stylized as its award-winning successor.

The story unfolds in a series of ever-shifting flashbacks, narrated by the girl, who lives with her parents and brother in northern Denmark. The hunchbacked father is a carpenter, and the mother is a devout Christian with “one foot on earth and one in heaven” who composes hymns on the family piano. It is an austere household nearly void of familial love. The young girl’s closest bond is with her brother Jesper, who lovingly calls her “Sistermine.” Three years her senior, Jesper is the stuff of romantic heroes: reckless, funny, smart, matinee-idol handsome, and bold enough to throw clumps of manure at invading German soldiers. It’s no wonder his sister adores him with something bordering on religious ecstasy. From an early age, Jesper’s ambitions stretch beyond the boundaries of their fishing village. He declares he will be a smuggler and smoke cigars; as he gets older and world politics start to encroach on Denmark, Jesper grows increasingly involved in the underground resistance.

Both children long to escape their rigid upbringing: “Sistermine” dreams of a better life in Siberia (“I wanted open skies that were cold and clear, where it was easy to breathe and easy to see for long distances”) while Jesper plans to live in sunnier Morocco, which is also a political hotbed. If the appeal of the longed-for Siberia is any indication, then their life in the provincial town is a hard one indeed. Eventually, Jesper must flee the Nazis and begins his politically nomadic life by going to Sweden, leaving his sister to deal with her loneliness and the harshness of the Occupation.

That Jesper is such a magnetic character is also one of the novel’s flaws. When he leaves Denmark, he also leaves the story for good, and his absence is felt by both the narrator and the reader on every remaining page of the book. But Petterson is at his best when the story rides on the simple flow of adolescent thought and language. The whole balance of To Siberia depends on how well the author can pull off the young girl’s voice. That he does so with such ease is as singular an achievement as Faulkner’s Benjy in The Sound and the Fury. The entire reading experience of To Siberia is filtered through the eyes of a girl painfully aware of the cruelties of adults as well as the beauty of nature. Notice, for instance, how war disrupts the pastoral in this passage:

From the field we had a good view of the road in both directions and the gray shadow of the Peder Skram outside the harbor lying completely still, and we saw the thin floury layer of ice on the beach, a peaceful veil between land and water. And then the Germans came.

Later, when she comes upon Jesper asleep in a shack, “Sistermine” is engorged with a turmoil of love and awe which Petterson expresses in prose that is sensuous and tastes of the forbidden:

I fill my head with thoughts till it feels purple and hot like the glowing iron at the blacksmith’s forge while I stand bent over my naked brother weeping because he is beautiful as pictures I have seen in books of men from other times.

Petterson slides the narrative back and forth across timelines, casting the reader adrift and, by consequence, focusing more attention on the immediacy of what’s playing out on the page. The reader will come away from To Siberia feeling like a) they have been enveloped in a rich, sensory experience; and b) nothing happened. Memorable plot points stand out like landmarks: a suicide, the invasion of the village, the rescue of one of the soldiers from drowning, Jesper’s defense of the family honor in a tavern. In Petterson’s novels, narrative events are almost beside the point; what’s important are the words which fill the interstices between action and character.

As in Out Stealing Horses, landscape is as much a character as the grim-faced fishermen who crowd the smoky bars. Whole, dense sections of To Siberia are given over to descriptions of traveling between villages:

I walk the same road with my father. It is Christmas time. I am nine years old. It is unusually cold today, hoarfrost and leafless poplars line the fields beside the road. Something gray moves at the gray edge of the forest, the thin legs of deer step stiffly and frosty mist comes in puffs from their soft muzzles, I can see it though I’m a long way away. You could touch the air, like glass, and everything seems very close.

Likewise, Petterson’s unadorned style is at once uniquely transparent and substantive: as delicate as filigreed ice on the edge of a winter lake.

Previous Previous Post: Outliers: The Story of Success
Next Post: Florence Nightingale: The Making of an Icon Next