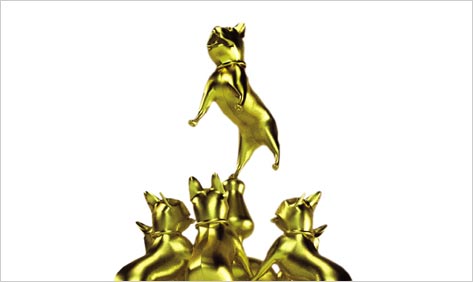 “The real benefit of competition is not winning, it is improved performance.”  Football coach Vince Lombardi didn’t say that. Po Bronson and Ashley Merryman did. Lombardi said, “Show me a good loser, and I’ll show you a loser.” Lombardi was a notorious crank, someone whom Bronson and Merryman would consider “maladaptive” in their latest book, Top Dog: The Science of Winning and Losing, a survey of recent efforts to get a grasp on the nature of competition. It is easy to imagine Lombardi turning the most innocuous event into a blood contest, a chance to humiliate, to bully, and if anything that is noble in competition checked his progress, it got mugged. But then, that was his science of winning, which he did a lot, and at clutch moments.

One of the most important points readers will take away from Top Dog is that there is no new-and-improved science of winning and losing, and the book’s subtitle can take a walk. There are studies that demonstrate this and then studies that demonstrate that—stress can be good for the competitive drive, stress can be bad; teamwork can elevate your performance, or diminish it; some of us are risk-takers, some avoid making costly mistakes. These observations are not necessarily contradictory, but fully display that each and every one of us needs to mix and drink our own specific, idiosyncratic competitive cocktail to get the best out of ourselves.

Many of the prize nuggets to be found here are things we have known or suspected since first putting on a uniform or standing up at the spelling bee. That the competition has to be close, for instance, if there is to be any fun, let alone tapping deep into the wellspring of our talent. That there is an advantage to playing on your home field, which probably has something to do with the territorial need to control your space, and that among the keys to success in competition is being able to focus your attention when under stress, to respect your opponent and not get overconfident, to think of competition as a challenge and not as a threat.

Bronson and Merryman present fascinating work exploring the endocrine system—often accompanied by well-crafted vignettes—which is overturning entrenched beliefs in the affects of testosterone’s role in motivational intensity as opposed to aggression, cortisol acting as a stress dampener rather than a cause, and the hung jury on COMT enzymes—fast-acting in some people, lazy in others—which corral and escort dopamine much like stagehands dealing with wearisome Oscar speechifiers. Hormones, it turns out, may drive us to compete, but they also may drive us to collaborate and cooperate. And there are some insightful things said about gender psychology regarding strategizing, cost/benefit ratios, and risky behavior.

Since so much of the material in these pages is conjecture or in the early stages of research—in more than one instance, Bronson and Merryman have to back up a step with an “Admittedly, this is just a theory…” — some of the authors’ declarations are annoyingly baseless. “Success in competition requires taking risks that are normally constrained by fear,” or “We automatically mirror attitudes, biases, stress levels, and goal activation”  of our teammates. Do these ever happen? Yes. Are they required or automatic? No. On rare occasions, they descend into simple boosterism: “Competitive fire is what you see when you dial the effort knob up to 11.”  Even Lombardi would have winced.

Still, there is plenty here to help you configure your “individual zone of optimal functioning,” to see if you are cut out for the dangers and excitement of edgework, if there are genetic elements you want to blend into your cocktail, how you respond to rivalry and spectators and prize spreads, whether you have a tendency to play to win or play not to lose, if a little anger is your friend or enemy. In the end, your zone is more about experience and the ring of truth than science.