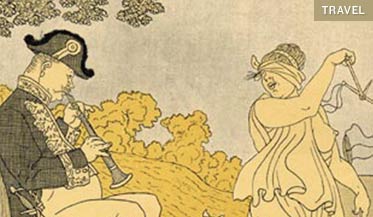 Divided into four parts, Travel Pictures by Heinrich Heine (1797-1856) is a proud, unruly book that was inspired by the poet’s travels across Germany and Italy during the early part of the 19th century. Rather than sticking to the familiar travelogue form, Heine’s book is an exercise in poetic fancy that reads like a collection of short stories. Curiously, Heine seems less invested in the lyrical evocation of the places that he visited — as one might expect from a writer identified with German Romanticism — than in treating the reader to a number of baser delights, such as pulling pranks, savaging one’s enemies, and recounting a good ghost story. One display of Heine’s earthiness is occasioned by the lack of a vacancy at an inn, obliging the author to share a room with a traveling salesman. Alas, the man from Frankfurt regales Heine — a converted Jew — with a carelessly anti-Semitic remark about Jewish merchants’ abdication of noble values in favor of maximizing their profit margins. In response to this, Heine tells the man that he’s a sleepwalker and apologizes, in advance, for any misfortune that may be visited upon him due to this condition. In the morning, Heine writes: “

Previous Previous Post: Beijing Coma
Next Post: While They Slept: An Inquiry into the Murder of a Family Next