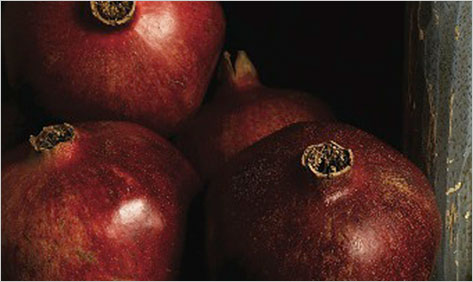 When cradling their satisfying heft in the palm, it is easy to see how pomegranates have been bestowed with the weight of spiritual symbolism across centuries and cultures.  The outer layer, rose-flushed and tough, peels back to reveal chambers paved with bright drops clinging to opaque membranes. The jewel-like seeds, once plucked, demand to be eaten. It is no wonder they have been cast as everything from forbidden to fecund to transformative.

Traveling with Pomegranates is a memoir that takes cues from all those traditions.  By, and about, a mother and a daughter, it unfolds in alternating chapters penned by Sue Monk Kidd  — the novelist best known for  The Secret Life of Bees — and her daughter Ann Kidd Taylor.

For Sue and Ann, pomegranates too represent more than food, The authors employ this metaphorically rich fruit as a thematic touchstone for a meditation on their dual journeys through life, separately and together, employing the  well-known  myth of the  mother-daughter pair of Persephone and Demeter.  Abducted by Hades, lord of the underworld, young Persephone samples one of his pomegranates before her mother Demeter can intervene: the seeds she eats correspond to the months she must return every year to the land of the dead, which in turn are reflected in the earth’s seasons.  For Sue and Ann, this story — and the  magical fruit at its heart —  suggests the link between the soul’s need to taste and explore darkness in order to become rejuvenated and return to a more sunlit reality.

And so the book begins with loss. And a journey to Greece. As Sue counts time until her 50th birthday, she contemplates the end of youth — both hers and Ann’s — as well as relinquishing fertility and crossing the border to old age and death.

Prompted by a poem from May Sarton that begins, “Old Woman I meet you deep inside myself,” Sue responds by trying first to articulate the sense of going through a transformation: “I only know there’s something unsettling about a door that closes forever.  I feel a vague lament about the changing of my body, the alterations in my appearance, the bleeding out of motherhood, the fear that I will not find that mysterious green fuse again.  As I listen carefully to myself, I overhear a confused murmuring inside: What now? What will be born in me now?”

It is not the first time she’s pondered the question.  Sue’s contemplative journeys to discover the essence of feminine spirituality and what can be born of it have been chronicled in her previous memoir, The Dance of the Dissident Daughter. Of the pilgrimage that took her through the careful study of multiple religious texts, cultural symbols, and statues as well as a thorough examination of her own soul,   she concludes that the search is “a process that doesn’t really end.”  So on a trip she’s offered to Ann as a gift for her college graduation, Sue picks her way inward as she seeks her way forward.

Ann is thrilled to travel back to Greece, the place where “all the dangling wires of my future came together to throw a spark.”  She writes poignantly of her comfortably quiet relationship with Sue, as well as the desire to keep her mother from the disappointing news that her post-collegiate plans —  ignited by an earlier visit to Greece —  have fallen apart.  She’s not been accepted to graduate school to study the classics and she’s just been turned loose from a love who insisted she deserved better.

With a keenly sensitive maternal instinct, Sue recognizes the powerful storm brewing within Ann on their flight to Greece but sagely keeps her own counsel.  Instead the two tromp across ruins, eat in small cafes, and hunt for the sign that will direct them to an experience of fresh self-knowledge.

There are several, notably the matching, diminutive pomegranate charms purchased by Sue to adorn both of their necks.  Then there is the fruit itself, which the two eat ritualistically at Eleusis, the site where Persephone is said to have disappeared.

Sue details another almost mystical encounter with a statue of a dark-skinned Madonna, which resembles one she’s seen in a dream.  “In the spirit of the pilgrimage, we all decided to ask the Virgin of the Myrtle for what lay discarded at the bottom of the heart, the thing half known and half allowed.  When I stepped beneath the limbs into green phosphorescent light and tingling tamata, I was unsure what to pray for.  To my surprise I blurted: ‘I would like to become a novelist.’ “

Observing her mother’s willingness to accept these small cosmic interventions while she attends to the changes in her own heart, Ann too experiences an epiphany. “Persephone never saw Hades coming.  She was jerked out of her nice sweet life and plunged into a dark underworld. On one level she was abducted into her own depths, forced into a deep and painful confrontation with herself.  Yet the time she spent in the underworld is precisely what transforms her from a naïve, untested girl into a mature and conscious young woman.”  It occurs to Ann that just as Persephone finds her way back, she too, possesses some control over her destiny.

This is not to say that one trip ties up all their loose metaphysical ends.  In many ways it is just a beginning.  Sue goes on to create a collage of images that worked their way into her consciousness during the sojourn.  Among them: “A white girl — fourteen maybe — a sassy smirk on her face, but a hint of something hurt and bruised there too.  A whirling cloud of bees. A black Madonna wrapped in chains. A jar of honey.” Thus the novel, The Secret Life of Bees, emerges from dream to reality.

Ann eventually comes to terms with readjusting her life’s plan and gives voice to her own long-buried desire to write.  As she marks the passages to marriage and motherhood, her resolve to work on the writing of her heart comes full circle.

With multiple references to journaling and tending the garden of the soul, it would be easy to dismiss this book as another new-age chronicle of female empowerment. That would be a mistake. It is dense with experiential wisdom, some episodes offering a burst of joyful tart juice, others offering the bitter fruit of disappointment.  The entire story moves with a sure, light step to its conclusion in fewer than 300 pages and each account is tempered by a restrained grace that saves both writers from coming off as overwrought or self-indulgent.  Perhaps this is because their writing is fearless, even as they both probe deep reservoirs of self-doubt. As Sue explores the roots of myth and spiritual traditions alongside her search for an evolved self, she’s never heavy-handed, never proselytizes.  Ann’s ah-ha moments are equally balanced and erudite.

I’m not giving anything away to say that their final chapters yield an experience that is satisfyingly complete, yet leaves room to wonder what the next bite will hold.  Just like a pomegranate.