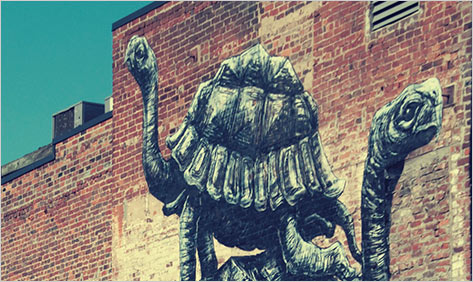 For a certain generation of readers Russell Hoban is best known as the creator of precocious badgers, kindhearted otters, and optimistic moles. Some may recall favorites from his Frances the Badger series of seven picture books published between 1960 and 1972. For me, Emmet Otter’s Jug-Band Christmas, published by Parents Magazine Press in 1971, was the ticket into Hoban’s enchanting world. In that book, down-on-their-luck otters in Frogtown Hollow compete in the annual Christmas talent show, hoping to win enough money to buy each other real store-bought gifts. The story was adapted for television by Jim Henson’s fledgling band of Muppeteers in 1977, and the movie premiered on HBO in December of 1978 and later aired on ABC. I’m sure I’ve watched it hundreds of times in the past thirty-five years, a holiday tradition forced on my two children, for whom I also purchased a first edition a few years back. I’ve also pressed Hoban’s The Mole Family’s Christmas (1969) on my digital-generation kids.

All this to say that my literary knowledge of Russell Hoban was, I suspect, like so many readers, limited to the children’s books he wrote and which were illustrated by his first wife, Lillian Hoban. Turtle Diary, a misleading title in this context, is not for the preschool set. It is an insightful and droll novel about mid-life discontents, entirely timely for the readers who grew up on his books and who now have children and crises of their own. Out of print for several years, this new edition of Turtle Diary, with an introduction by Ed Parks, gives us a chance to discover a different Hoban—not the earlier children’s author and not the later fantasy novelist—and to be charmed by what’s in between.

Turtle Diary‘s form consists of alternating journal entries—one by William G., a 45-year-old bookshop clerk, the other by Neaera H., a 43-year-old children’s book author—that mirror one another in a sort of reflective he said/she said about shared events, feelings, and perceptions. They worry about ocean pollution, invasive seaweed species, and whale and sea bird slaughter. It turns out these two lonely but likeminded strangers are both adrift—until the idea occurs to them (independently) that freeing the large sea turtles from the London Zoo might be the catalyst for personal change.

William is living in a rooming house, so estranged from his former life that he doesn’t know where his children, aged 18 and 20, are, or if his ex-wife has remarried. The beach pebble in his pocket picked up on a family vacation in Antibes is a constant reminder of that life as an account executive, homeowner, and father. He repeatedly visits the zoo he despises, picks fights with his untidy neighbors, and frets over his mental health. Of suicide, he writes, “I had been thinking of it right enough, I often do, always have the idea of it huddled like a sick ape in a corner of my mind.”

Neaera, whom William describes as “a more or less arty-intellectual-looking lady,” is more stable, though she daydreams about taking a sledgehammer to the thick aquarium glass at the zoo. She appears dazed by writer’s block, and her attempts to write a story about her newly acquired water-beetle are failing. “I have not got another furry-animal picnic or birthday party in me,” she writes. “I’d written them but there no longer seemed a place in their world for me.” Her successful Gillian Vole’s Christmas is suspiciously similar to Hoban’s own earlier title, prompting readers to consider the autobiographical nature of Turtle Diary. In 1969, the American Hobans and their four children journeyed to London, and when the thirty-year marriage ended in 1975, Russell remained in London (he married a woman who worked in a bookshop, and he had three children with her). The break does roughly line up with his literary output; in the sixties and early seventies, Hoban wrote mainly for children. While he never quit that, he turned his attention to novels for adults from the mid-seventies onward. Turtle Diary (1975) was one of the first, while his award-winning Riddley Walker (1980) took its place as one of the signature works of post-apocalyptic fiction. Turtle Diary enjoyed some further attention when Harold Pinter’s screenplay was adapted into a 1985 film starring Ben Kingsley and Glenda Jackson.

Turtle Diary is one of only two novels Hoban wrote without any hint of the science fiction, fantasy, or magical realism that would dominate his later work. But its major themes of freedom, rebirth, and self-consciousness arguably make it the turning point in Hoban’s career. William and Neaera want to return three turtles to the ocean and, and in doing so, restore the laws of the natural world and re-order the domestic (and artificial) world of dirty bathtubs and estranged children. Hoban, too, wanted to make a break. He had—in large part—moved on from the furry animals and laid down brilliant lines like, “Miss Neap’s lavender scent marches up and down the walls like a skeleton in armour.” He wasn’t going to flail and wade against the current, he was going to catch a wave and sail safely out of middle age.

But can William and Neaera? Are they capable of allowing the magic of the turtle rescue to transform them? Thankfully, Hoban spurns the pat ending (this is no Free Willy) and wallops the reader with the kind of intensity that asks more questions than it answers: What is the significance of all the stones and pebbles in the story? What do we make of its images of devolution and return to the ocean? Is the novel, at its heart, an ecological treatise? Even William ponders if he has been the central character in his own story; if he hasn’t been, then whose story is it? Perhaps it’s all of ours.

Rebecca Rego Barry is the editor of Fine Books & Collections. Her writing has appeared in The Millions, Preservation, Page Views, American Libraries, and Publishers Weekly. She can be found online at rebeccaregobarry.com.