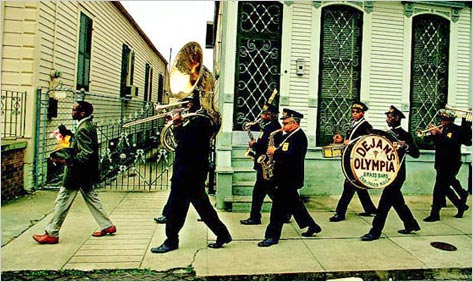 Even the toughest city has a soft side, where you can crack the concrete like a weed and leave an impression, make your mark, if for no other reason than your soul’s sake. That’s local color — and why cities have eight million stories to tell, naked or otherwise.

“New Orleans is all kinds of unfathomable,” write Rebecca Snedeker and Rebecca Solnit in their introduction to the deep-dyed, fine, and unconventionally drawn Unfathomable City: A New Orleans Atlas, “a city of amorphous boundaries, where land is forever turning into water, water devours the land, and a thousand degrees of marshy, muddy, oozing in-between exist; where lines that elsewhere seem firmly drawn are blurry; where whatever you say requires more elaboration; where most rules are full of exceptions.”

The New Orleans they chart is unfathomable “because no two people live in quite the same city.” The twenty-two vignettes in this collection speak to that individual appreciation in twenty-three distinct voices, yet whatever the topic — apothecaries, lead poisoning, lemon ice, institutional abominations, sugar, bounce music, environmental calamities, shifts in the road, bananas — they burn bright, both breaking and gladdening your heart; and the handsome cartography is illuminating in the best tradition of maps: taking you there, for better or worse. 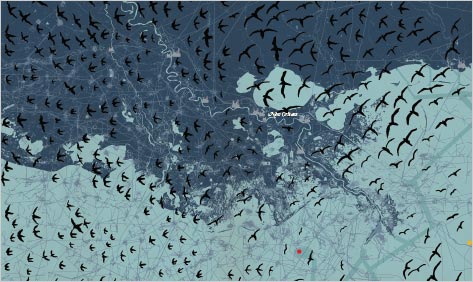 The twenty-two pieces — calling them essays feels too formal for such intimacy — are shaved to concision by their length, typically a couple thousand words, and project a sense of quickening as well as a close familiarity with their subject and place. New Orleans may be porous as a sponge — in many ways, from its acceptance of refugees to water-charged soil types — but the writing here has a high specific gravity, a chewiness that makes you want to pay close attention and count your bites. The writing commands that time slow here and jump there, and to simply disappear when you enter the various maps. As Richard Campanella remarks, the “history of New Orleans is essentially the story of overlaying orderly orthogonality on unruly curvaceousness.” That memorable juxtaposition provides embracing cartographic backdrop, while special points of consideration sting (slave pens), sing (Sugar Boy Crawford records “Jock-a-Mo/Iko-Iko” in Congo Square), and stagger (the jackstraw of oil and gas pipelines). Photographs, cartoons, and spidery line drawings as spooky as sharks’ eyes complement the map art.

The coverage sweeps where it wants, like the storm surges that bedevil the city. There are stories and maps of carnival krewe parade routes; the rapacious histories of the sugar and banana trades (one extirpating the cypress forest buffer and the other, our friends at United Fruit boasting that “anything less than nine inches won’t do”); corridors along which live oaks canopy the streets; the peregrinations of Tennessee Williams; the complex checkerboard of the city’s segregation; prisons (a growth industry); the birthplaces of New Orleans’ rambunctious variant on hip-hop; Houma migrations; the evolution of St. Claude Avenue; tuba bands; Arab neighborhoods; the dance of seafood and sex; and places that attend to the crazy, even if it’s all in their heads.

There is a darkly comic geography of the city’s dead, where the high water table made ground burial a problem. “As a body decomposes, it fills with gases — cadaverine and putrescine — that cause it to bloat. A coffin containing a bloated corpse will rise through the mud like a bubble in a carbonated drink… This is what happened for more than a hundred years after New Orleans was founded: every time it rained, bodies popped out of the ground.” Now bodies are buried in great crowds of mausoleums, but hidden necropolises continue to deliver their startling cargo to the surface when the watery graves are disturbed. 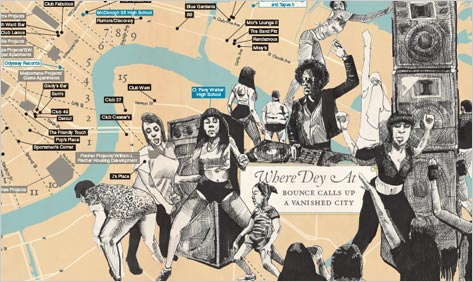 The last decade has not been kind to the people of New Orleans. First came Hurricane Katrina in 2005, which can’t be said to have scarred the city — the wounds remain open. To read the story of those terrible events now is to confront a stark instance of  justice and beauty struggling with ugliness and wrong, when the city’s most vulnerable were demonized, abandoned, and murdered by agencies of state, then sensationalized by a particularly yellow media — though all that was unevenly  balanced by many acts of common goodwill that reached all the way to heroic deeds.

Adding insult to injury was the 2010 blowout of British Petroleum’s Deepwater Horizon drilling rig in the Gulf of Mexico — spilling 210 million gallons of oil and 500,000 tons of natural gas, compounded by 1.8 million gallons of toxic chemical dispersants, not to forget also killing eleven rig workers — and the subsequent corporate evildoing. Prison sentences for the miscreants are cold comfort to the fishing communities and oyster farmers. ” ‘The tribe eats what we catch,’ Jamie [Billiot of the United Houma Nation] tells me. ‘Today, whether it’s shrimp, oysters, or crab, there’s less to catch, less to eat, and less to sell. Can we completely recover from this? Probably not. At what level will we recover? I don’t know.’ ”

New Orleans, our subversively cheerful sanctuary from the uptight, isn’t doomed, but something has ended that throws a long, melancholic shadow. “We fear endings most,” writes one contributor. “After an ending, we accept a dimmer reality.” In 2012, the New Orleans Police Department was taken over by the federal government. Last year, former mayor Ray Nagin was charged with twenty-one federal corruption charges. A recent congressman is in the tank for bribery, and so was a recent governor for racketeering and money laundering. This isn’t same-as-it-ever-was; it’s past that. This is the Delta blues calling all the shots.

Previous Previous Post: Endangered Africa
Next Post: "We Are All—Every One of Us—Unreliable Narrators": Alethea Black and Mary Miller in Conversation Next