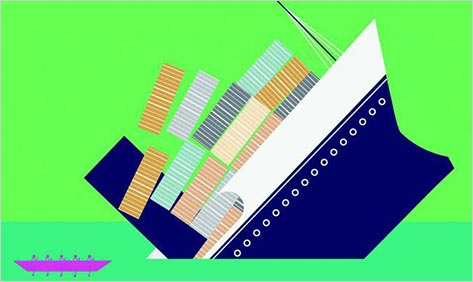 Recently I was on the phone with an old friend who resides on the West Coast. Shawn asked me what I thought of Spike Lee’s remarks on the gentrification of Brooklyn. While he was in Clinton Hill at the Pratt Institute, the filmmaker voiced his denunciation of the phenomenon during a segment of a public conversation that later went viral on the Internet. (For context: In 2005, I moved to Clinton Hill, one of the neighborhoods that Lee called out. And if you haven’t met me, it may help to know that I’m among those who benefited from the legacy of Dr. King.) In essence, I said something just this side of flip like, “Well, considered in the context of capitalism in general, is it shocking that an influx of private capital trying to secure for itself the highest return on its investment should show scant regard for those who stand before new wells of profit?”

You might say I was in a mood, for the temper of my remark was certainly midwifed by the book I was reading at the time: Benjamin Kunkel’s Utopia or Bust — a fascinating primer on contemporary Marxism and a clutch of left-wing thinkers such as David Harvey, Fredric Jameson, Robert Brenner, David Graeber, Slavoj Žižek, and others. Still with me? Good — I promise it’s worth it.

Doubtless, there are those who are allergic to any mention of the M-word. “The U.S.,” Kunkel writes, “remains a society in which Marxism can be advocated only a little more respectably than pederasty, and lately accusations of socialism erupt from the Republican Party more frequently than since McCarthy’s heyday.” Allowing for such a climate, Kunkel, one of the founding editors of n+1 and the author of the novel Indecision, reckons up front that his topic will disappoint some who’d rather read his fiction and that the probable market for a collection of essays drawn from the London Review of Books, n+1, and the New Statesman is small.

But who knows what the spirit of the times may require? I’ll wager that if you’ve stuck around thus far, then you think or suspect that life under our current capitalist dispensation is neither natural, nor morally neutral, nor immutable. If you’re concerned by the reports of ecological damage that have followed in the wake of capital or if you’ve caught the scent of a depressed culture that can more readily conceive of the apocalypse than life under a gentler economic system, Utopia or Bust may serve you well as a means of thinking through some of the most pressing economic issues we face, such as unemployment and underemployment; wage stagnation; individual and national debt.

In the introduction to Utopia or Bust, its author briefly writes about the period of depression that shadowed his burst of success. “Why should it have felt desolate? I’d always wanted to write novels and was now in a good position to go on doing just that. Part of the trouble seems to have been that your own fulfillment is no one else’s, and therefore not even quite your own.” I applaud Kunkel for turning his attention from literary matters to civic commitments — not because the one is better than the other but because an appreciation of both things are signs of a flexible mind attuned to both the stirrings of the imagination and the ethical imperative to push for a better world. In a cultural moment defined by inequity, any contribution to raising our collective economic literacy is commendable. I’m grateful for the information that Kunkel conveys based on his extensive readings of material, some of which — like Boris Gorys, perhaps — I doubt I’ll ever touch. Conversely, I’m happy to say that he makes a number of books I might never have prioritized, such as Robert Brenner’s The Economics of Global Turbulence and David Graeber’s Debt: The First 5,000 Years, seem more approachable.

Kunkel is a sharp essayist. His style is patient, direct, and periodically witty. In a footnote of his essay on David Harvey he writes, “In his 1865 lecture on ‘Value, Price and Profit,’ Marx illustrated luxury consumption as money ‘wasted on flunkeys, horses, cats and so forth.’ It is some measure of progress that the general population can now afford to keep cats.” Whether Kunkel is dissecting why capitalist economies are prone to recurring crises involving asset bubbles or elegantly contending for the value of the thinkers like Frederic Jameson the impression he leaves is that of a sensible man making sensible arguments, rather than a firebrand indulging in exhibitionism.

Lest anyone think that a more equitable world isn’t possible, I direct one to consider the enormous strides this country has taken in correcting historical policies of disenfranchisement. Some forms of change are predicated on the practical needs of necessary dreams. And Utopia or Bust is an invitation to dream such dreams, even while it maps the economic contours of our all-too-real present.