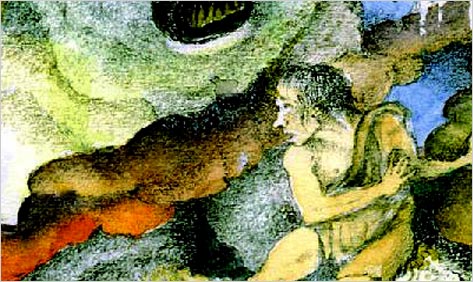 When I heard the news of Maurice Sendak’s death last spring, I felt the stricken, heartsick sadness normally reserved for family and friends. Mr. Sendak, a stranger to me, was of course neither — and he was both. Winner of, among other honors, the 1964 Caldecott Medal, the 1970 Hans Christian Andersen Award, and a National Medal of Arts, Sendak has famously insisted that he never set out to write books for children. “I write, and somebody says, ‘That’s for children,’ ” he told Stephen Colbert in a television interview.

No one should claim that his posthumous work, My Brother’s Book, is for children. Let me make that clear from the outset. This is not a children’s book. Most kids would be bored and bewildered by it, stirred and vaguely disturbed. Being a bona fide former child myself, that was my own first reaction. The text, with its Shakespearean undertones, confused me. The images looked eerie and both too much like and too much unlike William Blake. But that was only a first, foolish impression — my own dimwitted attempt to force the book into being something it was not: intended for children.

My Brother’s Book is a beautiful, evanescent elegy, composed about Sendak himself and his late brother, Jack — who here stands for all of Sendak’s beloveds, including his late partner of fifty years, Eugene Glynn. (Aptly enough, Glynn was both an art critic and a psychiatrist for the young.) I use the word composed deliberately, for all of Sendak’s best work was musical and strongly rhythmical, “a kind of muscular rhythm,” as he once described it. The book echoes language from Shakespeare’s Winter’s Tale, a play of love, loss, jealousy, and imagination run amok. That play contains Shakespeare’s most famous stage direction: “Exit, pursued by a bear.” The note could not be more apt.

At the start of My Brother’s Book, the two brothers, Jack and Guy, are torn apart “on a bleak midwinter’s night” by a meteoric event, the death of Jack. Guy is left alone to mourn and plummet back into the land of the living. There he’s met by the terrifying figure of a fierce white bear who threatens to “kill his breath / And eat him — bite by bite.” Defiantly, Guy offers himself as sacrifice, if the bear will only answer his “sad riddle.” Where has Jack gone, these “Five years in iced eternity. / Bear! — Tell me! — Whither? — Where?” This is the turning point in My Brother’s Book. Sendak’s paintings are dominated by images of falling and freezing — till Jack defies the bear. An almost visible melting follows, washed in shades of gold and green, and at last the figures begin to rise.

The bear, godlike in response to Guy (echoing, among other things, Dante’s Inferno and the Book of Job), creates a whirlwind, scatters himself skyward into the Ursa Major constellation — but Guy slips inside the godhead, “Diving through time so vast — sweeping past paradise!” and finds his lost brother. The pair have a Sendakian reunion — Guy can’t resist biting his brother’s nose, just to be sure he’s real, and Jack can’t help sighing at being awakened. Jack has become one with the “blossoming gold from a new sun,” entwined with “a wild cherry tree dusted pink.”

In this cosmic game of hide-and-seek the brothers are at last reunited. Jack forgives Guy for finding him. “And his arms, as branches will, / Wound round his noble-hearted brother, / Who he loves more than his own self.”

Sendak claimed to have been terrified of death all his life. He had the kind of sickly childhood that tends to form great artists. (Robert Louis Stevenson was another, along with Edvard Munch, Toulouse-Lautrec, and Proust.) Small wonder that so many of his young heroes and heroines face death, whether they laugh in its face or flee. Max terrifies and rules the Wild Things that menace him. Ida rescues her baby brother from the ice goblins of Outside Over There, and Pierre, who famously “doesn’t care,” lightly flings himself into the lion’s mouth. This is not new territory for Sendak, but he newly mints it in the absolute conviction with which he throws himself into his eternal themes. If there is a message to the book it is that some things are worth dying for, including love.

Most readers will be immediately aware of Blake’s influence, which hovers over every page My Brother’s Book. But what I first saw as a blurred and watery reflection of the plates in Innocence & Experience is a deliberate erasure — like  Cézanne’s vanishing pears and apples painted at the end of his life. The things we love disappear. Here they are, disappearing, and yet we love them. That seems to be the undercurrent of Sendak’s valedictory last book: as in Shakespeare’s last great work, The Tempest, the magician drowns his book.

During his life, Sendak wrote and delivered brilliant insights — published in Caldecott & Co. — on the artists he admired most. Nearly everything he wrote of them is equally true of himself. On Blake: “The intensely personal images seem the very embodiment of his poetry. His inspired interweavings of ornament, illustration, and calligraphy animate…and create a transcendent vision of otherworldliness.” Meggendorfer’s pop-up pictures, Sendak declared, “don’t merely move; they spring to life.” He acknowledged his kinship to cartoon strip artist Winsor McCay, serving “the same master, our child selves. We both draw not on the literal memory of childhood but on the emotional memory of its stress and urgency. And neither of us forgot our childhood dreams.”

Sendak also offered a tribute to Lovat Fraser, the illustrator of Walter De La Mare’s Peacock Pie, and in so doing created a perfect self-portrait: “He was free of aesthetic snobbery. With the same care and integrity, with relish and joy that are altogether beguiling, he embellished, decorated, and designed everything from charming ephemera to his glorious stage productions. No form was beneath him.”

In his dedication to a popular form disdained by others, Sendak taught us how a picture book could stand unashamed next to the work of Melville and Mozart, and how truth telling was as important in a bedtime story as in a poem by Emily Dickinson. Most of all, he gifted us with a quickened, ever-experimenting sensibility. “The artist,” Sendak wrote, “has to be a little bit bewildering and a little bit wild and a little bit disorderly.” For the delights of such bewilderment, and for countless indelible phrases and images, we must be forever grateful.

Liz Rosenberg is the author of the novel The Laws of Gravity, published in the spring of 2013. She has also written more than twenty books for young readers and teaches at Binghamton university. She can be reached at lizrosenberg.writer@aol.com.