“I am not going to stand here and tell you that failure is fun,” J. K. Rowling writes in Very Good Lives, a slim new volume that reproduces the short speech she gave in 2008 for Harvard’s commencement ceremonies. But don’t get Rowling wrong: she’s definitely recommending it to the hordes of type-A’s before her, who have been set up by their Ivy educations to do anything but fall off the map. The fact is that “rock bottom became the solid foundation on which I rebuilt my life.”

If the hairs on your arms are already beginning to stand up, steel yourself, because later in the speech Rowling extols the virtues of “imagination.” For her it is “not only the uniquely human capacity to envision that which is not, and therefore the fount of all invention and innovation” but also “the power that enables us to empathize with humans whose experiences we have never shared.” The speech then veers off into an endorsement of the activities of Amnesty International before advising graduates to keep their friends close, because in Rowling’s own life they became the “people to whom I’ve been able to turn in times of trouble.”

A reviewer with a purely cynical disposition might stop and complain about the wholesale surrender to sentimental cliché here, or about a culture in which producing this speech as a stand-alone book looks commercially viable for a publisher. The only way to make it a book-length text, after all, is to break it up into one sentence per page, accompanied by pretty, if somewhat irrelevant, pen-and-ink drawings. 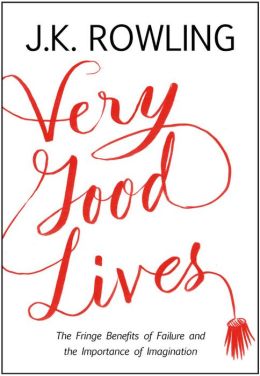 The more interesting question might be: Why do people, indeed, buy such books and respond to such stock phrases? It seems to be what people want. The attraction of cliché is, after all, the engine on which all commencement speeches are built. Rowling’s is actually much less self-conscious for this than is typically the case today. For example, George Saunders’s commencement speech at Syracuse University, which clogged most of my social media feeds for months in 2013, begins:

Down through the ages, a traditional form has evolved for this type of speech, which is: Some old fart, his best years behind him, who, over the course of his life, has made a series of dreadful mistakes (that would be me), gives heartfelt advice to a group of shining, energetic young people, with all of their best years ahead of them (that would be you).
And I intend to respect that tradition.

And the famous 2005 Kenyon commencement speech by David Foster Wallace, which was similarly published on its own as This Is Water, admits its obedience to tradition in its first paragraph:

This is a standard requirement of US commencement speeches: the deployment of didactic little parable-ish stories. The story thing turns out to be one of the better, less bullshitty conventions of the genre, but if you’re worried that I plan to present myself here as the wise, older fish explaining what water is to you younger fish, please don’t be. I am not the wise old fish.

(In fact, even the humble renouncing of the ability to provide wisdom is a convention of the commencement speech.)

Wallace’s biographer tells us that when he was writing This Is Water, he joked to his wife that he’d need her to dance beside him to keep people entertained. Ten years later, quotes from the speech are scattered all over the Internet. It has the status of a quasi-religious text. So much so, in fact, that even people who adored This Is Water complained, a little about the book version, which similarly stretched the text within an inch of its life. “The job of the speech, after all, was not to make money,” the young adult writer John Green, an admirer of Wallace’s, wrote. “The job of the speech was to lead people toward better lived lives.”

It isn’t, any longer, the case that only freshly minted high school and college graduates have to think about new beginnings. The instability of the economy now demands that workers from the middle class on up reinvent themselves constantly. The  commencement speech consoles by reminding us that there was a time when we felt that there was a very real possibility that we could all end up in “better lived lives.” And it does more, by holding out the possibility that it could guide us back onto that straight path from wherever we have wandered off to.

Rowling, of course, explicitly hopes to lead us there. She says so, right there at the end: “I wish you all very good lives.” Few of us are likely to live as well as Rowling has, which she knows as well as we. It’s not a matter of lacking a roadmap she could provide us. It takes more than an Ivy League education, more than hope, more than hard work to become the kind of stratospherically important (and wealthy) figure she has become. But it’s not clear that the acquisition of such homilies, in talismanic form, helps us to discover and follow our own routes to a “good life” — or even just a better one. What they might do, instead, is distract us from the more idiosyncratic and unexpected paths along which the vast majority of us would find better reward.

Previous Previous Post: Aleksandar Hemon: Always an Invasion
Next Post: The Life of Saul Bellow: To Fame and Fortune, 1915–1964 Next