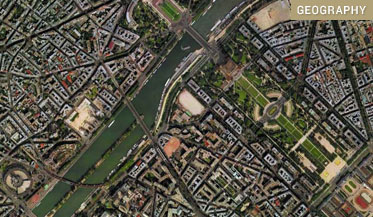 The Titan Atlas, who bore the heavens on his shoulders in Greek mythology, later lent his name to a collection of maps — as though he preferred embracing the earth to holding up the sky. Now two of the newest, most complete atlases recall Atlas to his original charge, as they each include maps of the solar system, the galaxy, and the universe in addition to plans of virtually every place on earth.

Both The (London) Times Comprehensive Atlas of the World and the National Geographic Visual Atlas of the World are hefty tomes, weighing in at twelve pounds and nine pounds, respectively, including their slipcases. Their titles express the major difference between them — namely that the Times is more comprehensive, and the National Geographic more visual.

“Maps,” the Geographic text notes in its user’s guide, “arouse passions.” Certainly they do, though these two volumes will appeal to aficionados of widely differing desires and degrees of wanderlust.

I see the ideal audience for the National Geographic atlas as someone raised on the color and commotion of World Wide Web pages. A typical spread in this volume is packed with all sorts of information ancillary to the maps themselves, such as graphs showing population statistics and the percentage of protected land area, along with the flags of the relevant countries. If I wanted to pick — and I’d have to be extremely picky to complain about anything in this admirable publication — I’d point out that the flags are reduced to thumbnails, so it’s hard to appreciate their detail. (Even in the back-of-the-book section called “Flags and Facts,” where all nations’ flags reappear, slightly larger, it’s still the case that any flag bearing a complex coat of arms — Paraguay, Peru, Portugal, et al — requires a magnifying glass. Or maybe just youthful vision?)

Pages in the Geographic atlas are peppered with color photographs showing tourist attractions, especially world heritage sites, that await the visitor to the mapped locales. Even the table of contents is heavily illustrated (stepped rice terraces in China, ice islands in Antarctica), and gives way to three double-truck spreads of truly astounding beauty: a golden Colorado River running through the Grand Canyon, the Taj Mahal at purple dusk, Macchu Pichu in the mist. In short, the atlas fulfills the promise implied by the words National Geographic.

It plats the world in any number of ways, not only by hemisphere, continent, and pole, but also by plate tectonics, climate, language, religion, mineral resources, military strength, and more. Each continent section opens with an establishing map in monochrome, giving just a suggestion of national boundaries and geographical features, set off by a block of full-color photos at the right-hand margin. Then comes a more detailed topographical map of the region, followed by a school-room type map in which contiguous countries are assigned contrasting colors, and then a series of regional maps showing “themes” such as water availability, energy consumption, and population density. These give way to the more detailed maps of each country (often several neighboring countries together, as with Israel, Jordan, Lebanon and Syria).

The “Space” section charts the craters on the lunar near and far sides, the orbits of the planets, the Martian landscape, and the general layout of the universe. There’s even a map of world time zones and a full table of metric conversions, though the crucial one — a scale of miles v. kilometers — appears on almost every page.

The Times atlas has a more staid appearance, in keeping with its tradition of atlas publication dating back to the nineteenth century, and the fact that it is dedicated, “with her most gracious permission,” to Her Majesty Queen Elizabeth II.

There are hardly any photos. The exception is an interesting brief history of mapping, with a dozen pictured examples of prior worldviews: a Babylonian clay tablet map from c. 600 BCE, Ptolemy’s second-century map of the known world, a Mediterranean portolan, or sailor’s chart, (on vellum) from the late 1200s, and so on. The series ends at a high resolution satellite image shot from the skies above Venice, attesting to the innumerable ways in which maps and mapping techniques have changed in the age of Google Earth.

After that, it’s all maps. Maps of scrupulous detail and topographic precision. Maps for map lovers who can’t be content with one plate per country, but would require more like four plates, covering eight oversize pages, to give France its due. I imagine the ideal reader of the Times atlas as someone who has perhaps already traveled the world, and wants to recall this or that exact itinerary — every stop made along the way, say, from Grand Bassam to Tabou on the coast of the Cote d’Ivoire.

The Times’ comprehensiveness is reiterated in the index, which contains enough geography to fill more than two hundred pages, five columns per page, in tiny type. (Breathes there an atlas that doesn’t require a magnifying glass?) The small town in Italy where my husband grew up, Ischitella, appears there, though it did not make the cut in the National Geographic. The same could be said for the Iwupataka Aboriginal Land, and who knows how many other diminutive places of origin.

If you opened the Times atlas from the back, perhaps to consult its exhaustive index of place names, you might think the whole volume contained only 223 pages. But that’s because each section is numbered separately. In other words, the glossary and index alone cover 223 pages — in addition to the 67 pages of front matter and 249 heavyweight pages (125 plates) of maps. The National Geographic atlas, too, includes a glossary, wherein you may discover that adrar, ben, pegunungan, sopka, vrh, and yoma are only some of the many ways to say “mountain,” but the Times atlas lists almost twice as many terms, and also tells you what language you are speaking when you call those places by name (Berber, Gaelic, Malay, Russian, Croatian, Burmese).

For myself, I am happy to turn from one atlas to the other, savoring the possibilities of each rich assortment, and pondering the philosophical questions they raise. For example, the National Geographic atlas considers a canal a “cultural feature” in the same category as a wall or a ruin or a landing site on the moon. It does not classify a canal under “water features” along with aqueduct. Nor does it consider a canal a means of “transport,” though the Times does. And, perhaps it goes without saying, the Times draws a distinction between “canal” and “minor canal.”