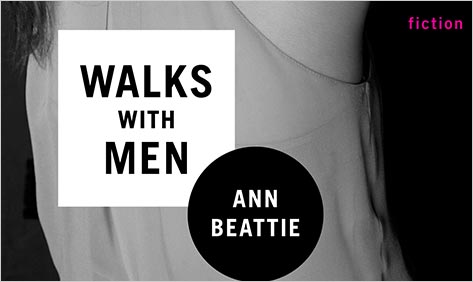 In Ann Beattie’s Walks with Men, smart, young Jane Jay Costner arrives in New York fresh from Harvard and becomes involved with an older man, Neil, who promises to teach her about the world. When Jane discovers that Neil is married, it doesn’t stop her. (Who amongst us hasn’t been a fool for love?) Neil gets divorced, and Jane marries him.

“If you take food home from a restaurant, don’t say it’s for ‘the dog,'” Neil instructs Jane in a typical Beattie koan-like aphorism. “Say you want the bones for ‘a friend who does autopsies.'”

The book contains all the virtues and weaknesses we’ve come to expect from Beattie: subdued emotion, clever dialogue, the use of name brands to depict life’s emptiness. “The La-Z-Boy is a piece of shit. He can tell from the way the footrest flapped down that it isn’t going to come up again.”

As Beattie herself did with the publication of her first novel, Chilly Scenes of Winter, Jane becomes a successful writer and a spokeswoman for her generation. But she should have known better than to hitch her star to Neil’s. He leaves her, of course, and she reacts with characteristic Beattie anomie. She burns his writing and attempts to scatter the ashes in her old boyfriend, Ben’s, yard. (In another cloyingly cute Beattie touch, Ben became a guru named “Goodness” and was pushed under a subway car.)

Beattie is an admirable craftswoman, especially in her pithy dialogue. But at the end of the story, she leaves us hungry—for at least some authorial insight into this flat account of Jane’s aimless and impoverished life.

Dinitia Smith is the author of three novels, and a former arts correspondent for the New York Times, where she wrote on literature.