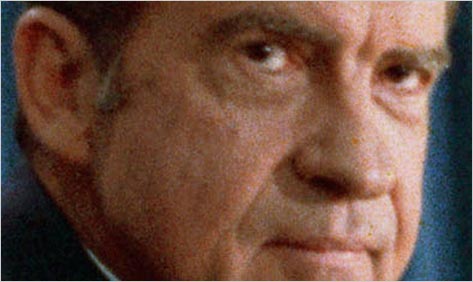 How terrible and insincere was Richard Nixon’s smile? In his new novel, Watergate, Thomas Mallon glories in counting the ways. It is a thing that “clicked into place.” It is a “rictus.” It is “mirthless” and “mechanical.” It is “automatic and false.” And it is, in the end, an apt metaphor for the mood of calculation that swarms around this story. The Watergate scandal was defined by a clown car’s worth of poorly executed efforts to cover up a mess. Every attempt by the president to mimic a person capable of happiness just clarifies how poor that execution was.

Among the various pleasures of Mallon’s eighth novel is that kind of allegorical thinking. It’s an essential trait for a book like this, because dwelling on the actual facts is tedious: They’re well known, much parsed, and at times punishingly dull, even for political wonks. Mallon mostly sticks to the record but avoids rehashing old dramas: He clears little room for the flashpoints of the scandal that forced Nixon’s resignation in 1974. There is no scene describing the botched break-in of the Democratic National Committee headquarters, no visit to the Washington Post offices where Woodward and Bernstein doggedly pursued the story, not a single scene featuring Mark “Deep Throat” Felt, the FBI associate director/Post informant, or G. Gordon Liddy, the “mustachioed nutcase” who coordinated the break-in.

Removing all that removes a lot of action. But what’s left is an observant and interior — almost claustrophobic — study of power, and (here’s Mallon’s chief concern) how men and women manipulate it differently. The men, including presidential aide Fred LaRue, “plumber” Howard Hunt, and Nixon himself, tend to stew privately about where they stand. LaRue neatly summarizes the “algebra that governed the room”: “Magruder hated Liddy. Mardian hated Magruder. Ehrlichman hated Mitchell. Mitchell hated Colson.”

The women, who know where they stand in relation to federal power — entirely outside of it — strive to gain leverage from oblique angles. Hunt’s wife, Dorothy, tries blackmail. Nixon’s secretary, Rose Mary Woods, is heartbroken over her beloved boss’s troubles, but she does have access to his Oval Office tapes — so easy for a klutz to erase five, ten, eighteen and a half minutes. Pat Nixon pursues an ongoing flirtation with a philanthropist, wholly a product of Mallon’s imagination, and their romance is so chaste (“kerchiefs and dark glasses; the afternoon meetings in movie theaters”) that her transgression is sweetly forgivable amid her husband’s titanic moral rot. Sitting in imperious judgment is Alice Roosevelt Longworth, Teddy’s daughter, in her late eighties as the scandal transpires. At once the novel’s comic relief, voice of reason, and moral core, she has the clearest vision of anybody of the players, particularly Nixon: “This misanthrope in a flesh-presser’s profession, able to succeed from cunning and a talent for denying reality at close range.” If a clear vision of political dysfunction mattered, Mallon suggests, Longworth would have been in office herself.

In his fine 2007 novel about State Department homophobia in the 1950s, Fellow Travelers, Mallon summed up a furtive gay relationship with a line that also perfectly encapsulated D.C.’s political culture: Everybody involved was living in “an electrified cage of who had what on whom.” Watergate is Mallon’s thickest, most densely researched expression of how those claims of ownership operate, though as electrified cages go, it could use a little more zap at times. Mallon’s effort to avoid the clichéd, portentous moments makes for plenty of low-boil scenes of men quietly fuming in rooms. Even the more potentially dramatic moments are muted: Dorothy Hunt died in a plane crash in 1972, and Mallon dispatches her elegantly (“an explosion of blue and orange flames that fused her locket forever shut”) but with brutal speed.

If that makes the final third of Watergate a bit plodding — another batch of drinks, another tense conversation, another scene of Tricky Dick sadly putting on a Victory at Sea record, alone — it resolves beautifully. LaRue spends much of the novel worrying about an incident involving his father’s death, and what at first seems to be a bit of character seasoning proves to be an essential piece of the Watergate puzzle. That detail fits perfectly with Mallon’s smirking attitude about the scandal as a whole — that it was as much a product of men’s deeply personal anxieties as any broader political concerns. Watergate is a product of thorough research, but it works as fiction to the extent that Mallon takes its clot of operatives and politicians less seriously than they took themselves. He cares more about gossip than impeachment proceedings, making him a kindred spirit to Longworth, who famously owned a throw pillow reading, “If you can’t say something good about someone, sit right here by me.” Have a seat; Mallon has a story about Richard Nixon he’d like to share with you.

Previous Previous Post: The Annotated Emerson
Next Post: Everyone Loves a Good Train Wreck: Why We Can't Look Away Next