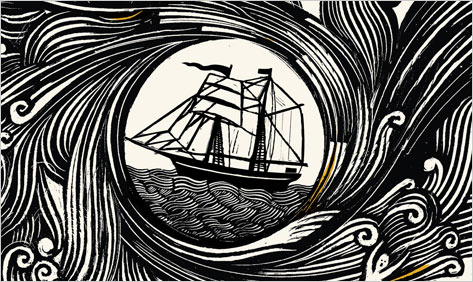 It’s tempting to call this immense andimmensely engrossing novel a Danish OneHundred Years of Solitude. Covering a century in the lifeof the shipping and trading town of Marstal, We, the Drowned certainly contains a number ofmagic realist moments, starting with its first sentence: “Many years agothere lived a man called Laurids Madsen, who went up to Heaven and came downagain, thanks to his boots.” In subsequent pages a charismatically amoralvillain uses pearls as bullets, we learn the destiny of the shrunken head ofCaptain James Cook, people are nearly smothered to death by swarms of butterflies,a snowman turns out to be a corpse covered in ice, a wealthy shipbroker’sdreams reveal the deaths awaiting his townspeople, an obsessed woman decides topunish the sea, and in a moment of reckless courage, a despondent ship captaindives into the North Atlantic to rescue a torpedoed vessel’s singlesurvivor—who turns out to be his long-lost love.

YetCarsten Jensen’s book is too good to be reductively relabeled One Hundred Years of Sailoring. First ofall, Marstal isn’t Macondo; it’s a real Danish port, and the novel adaptsactual events from the city’s history. Second, Jensen’s book more properlybelongs to the classic European tradition of the multi-generational historicalnovel: at times it calls to mind Thomas Mann’s Buddenbrooks, at others it reads like atightly packed one-volume condensation of Emile Zola’s Rougon-Macquart cycle.

While thenarrative thread focuses on the sailors Laurids Madsen, his son Albert, andAlbert’s adopted son Knud Erik, the book is also something of an anthology of setpieces: individual chapters depict brutalized childhoods, there’s a SomersetMaugham-style tale of the South Pacific and a Jack Londonish short story abouta murderous first mate; several sections reveal the loneliness and suffering ofthe wives left behind in Marstal; and there are extended accounts of thehorrors of battle at sea, from the early 19th century through WorldWar II. Very seldom does any individual’s story end quite as he, she, or thereader expected: instead, life just goes on.

Thatexplains, in part, the novel’s unattractive title, We, the Drowned. Told neither from an omniscient Olympian point ofview nor in a memoirist’s first person singular voice, the book is narrated bya collective “we.” In effect, the story is related by a chorus, likethose in ancient tragedy, and one that not only sets down events but alsocomments on their implications. By the end of the novel, however, that “we”has grown to encompass more than the group memory of the Danish port city ofMarstal. We, the Drowned points tothe ultimate fate that awaits us all on life’s voyage. As Jensen succinctlyputs it:

Youcould learn about clouds, wind direction, and currents, but the sea remainedforever unpredictable. All you could do was adapt to it and try to return homealive.

As youmight already suspect, the novel’s vision of life is hardly cheerful—goodpeople die, evil is sometimes punished and sometimes not, the past poisons thepresent, and even innocent pets come to grotesque ends. Jensen is clearly kinto such melancholy Danes as Hamlet and Kierkegaard. Death haunts these oftendoleful pages:

Themerciful comfort of a grave to which you can take your children and tell themabout their father in front of the headstone that bears his name, thepossibility of distracting yourself by clearing weeds or perhaps disappearinginto a whispered conversation with the man who lies underground—a sailor’swidow is denied all that. Instead she receives an official document declaringthat the ship her husband was working on, or perhaps skippered and owned, hasbeen ‘lost with all hands,’ gone down on this or that date, in this or thatplace, often at a depth beyond salvaging, with fish the only witnesses. And shecan put that piece of paper away in a drawer of the bureau. Such are thefuneral rites awarded to the drowned.

At best,cold comfort is allowed the bereaved of Marstal, that which arises fromclear-eyed understanding: “The captain’s message was simple: this is theway things are. He taught us a vast, all-embracing acceptance, which allowedlife’s realities to come at us directly. The sea takes us, but it has nomessage to convey when its waters close over our heads and fill our lungs. Itmay seem like strange consolation, but Albert’s words offered us a foothold:things had always been this way, and these were conditions we all shared.”

At first We, the Drowned seems almost plotless,but gradually patterns, leitmotifs, and symbolic objects (the magical seaboots, James Cook’s shrunken head) begin to recur, so that the book emerges asan exploration of what one might call life’s connectedness. Jensen clearlyrelishes the strange conjunctions of time and chance. His book is full ofcoincidence, undeserved luck and unexpected misfortune. Laurids Marsdendisappears, and his son Albert roams the earth searching for him. A generationgrows up and dies, as a new generation is born with the same dreams of life andadventure. We are linked, moreover, not just by blood or affection but also “throughthe hurt we inflict on one another.” Wars erupt and destroy lives andfamilies—again and again. People fall in love and usually things don’t workout. While his betters die young, the most hateful character in the novelsurvives, and his survival turns out to be a kind of blessing. One simply neverknows. When a civic-minded shipowner erects a town monument—emblazoned “Strengthin Fellowship”—he lives to see the hollowness of its words.

Life isgray and hard in Marstal. As one bitter woman says: “You call Marstal asailor’s town, but do you know what I call it? I call it a town of wives. It’sthe women who live here. The men are just visiting.” Even lovemaking isseldom joyous, usually being marked by violence or likened to drowning, two peopledragging each other down into the depths. The town preacher actually shrinksfrom the grief of his parishioners. One group of children, tormented by asadistic schoolmaster named Isager, is mystified by a supposedly admirable OldTestament figure:

“Weknew all about Jacob: we’d paid attention. We knew that he was an impostor whostole from his own brother, the hairy-armed Esau, and lied to his father, theblind Isaac, and sired children by four different women, Rachel, Leah, Bilhahand Zilpah, and that when one proved barren, he would simply move on to thenext, and that he had a fight with an angel that left him with a limp, but thatlater he was blessed by God. It was a peculiar story, but none of us daredpoint out its oddness to Isager.”

Still,one misses some lightness and laughter. After all, there’s more to existencethan disappointment and suffering. Or is there? When the pain or desperation istoo great, Jensen’s characters simply ship out or run away or start drinkingand whoring. Wryness is the book’s substitute for humor: “Withoutdiscussing it with his mother, Anton went up to his teacher, Miss Katballe, andinformed her that after seven years he was now quitting school. It was the bestday of her life, she replied. With unexpected politeness he bowed, thanked her,and said, likewise.”

Whyshould you give this fine, if hardly sunny, novel a try? Joseph Conrad oncesaid that a man who is born falls into a dream like a man who falls into thesea. Jensen shows us the dreams of dozens of people, and what those dreams leadto. His final chapter, “The End of the World,” is as shocking andthrilling a short novel about men at sea during World War II as any you willever read. Still, the loneliness in Jensen’s book, as well as its savagery and stoic,even heroic attitude toward life, may not be to everyone’s taste. Like SamPeckinpah’s film “The Wild Bunch” or Cormac McCarthy’s epic Blood Meridian, these pages never flinch fromanything. This is how things are. Carsten Jensen’s international bestseller isn’tjust a book about Danish sailors, it’s a novel about what one must call—andforgive the grandiose phrase—the sorrowful human condition. To those with eyesto see, we are all, as the poet Stevie Smith observed, “not waving butdrowning.”