West of the Revolution 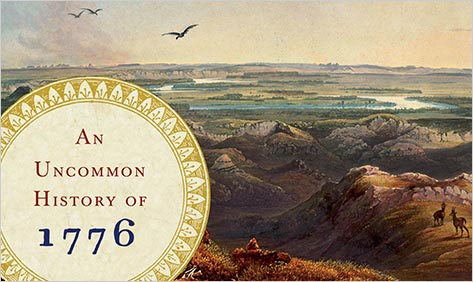 For most of us, the year 1776 brings to mind the Declaration of Independence and the birth of the United States. When pressed to fill in more details, perhaps we remember it was also the year Thomas Paine published Common Sense and George Washington crossed the Delaware. But few of us would think to mention the Russian fur trade with China in the Siberian town of Kyakhta; the founding of San Francisco; or the birth of the Lakota Nation in the Great Plains. Yet these moments and more are what Claudio Saunt, in his provocative new history, West of the Revolution: An Uncommon History of 1776, argues are just as significant to our grasp of that watershed year.

What the Russians were doing in Kyakhta, the center of a vibrant trade with China in North American furs, for instance, bears as much weight on the United States of today as what the Founders were doing in Philadelphia. Saunt contends that if it were not for Russia’s lucrative fur trade, the Spanish would have had little reason to colonize much of the West Coast and the Southwest. In the late eighteenth century, the Spanish became alarmed at the increasing Russian demand for sea otter and fox furs bought from natives on the Aleutian Islands, just off the coast of Alaska. To prevent their further expansion into North America, the Spanish pushed north from Mexico into California, establishing San Francisco in 1776.

Saunt’s retelling of the founding era reflects the changes in America he sees today.  We are increasingly aware of climate change, infectious diseases, and globalization, which makes us “perhaps better than ever prepared to understand and relate to the experiences of eighteenth century North America.” Disease is everywhere in Saunt’s account, and so are the nefarious effects of global trade on the environment and local populations. Skeptics might think that West of the Revolution, then, is mere politics masquerading as history. But all history writing is informed by the present, regardless of whether the historian is aware of it, admits it or not. Saunt is simply stating what most historians know implicitly.

The Spanish came to California bearing many diseases. In San Francisco, sailors arrived with purple lesions, bleeding gums, and “grotesquely swollen limbs,” the likely effects of scurvy. While scurvy isn’t transmissible, Spaniards also brought with them pathogen-carrying livestock and, after centuries of exposure, their own immunity to the microbes. But foreign diseases would decimate natives, repeating a process that had been occurring since the earliest days of Spanish settlement. In 1774, one Spanish mission near San Francisco reported an extraordinary native death rate of 85 per 1,000, more than enough to prevent the indigenous population from increasing. In San Diego, the unintended spread of disease contributed to the intentional spread of violence. On November 5, 1775, a local group, the Kumeyaays, led an uprising against the Spanish — all this, Saunt reminds us, at the same the American colonists stepped up their revolt against the British.

Environmental transformation is equally central to Saunt’s story. The Canadian boreal forest was devastated in the aftermath of the French and Indian War (1754–63), the conflict that would directly lead to the American Revolution. British fur traders in Canada refused to observe the strict trade laws imposed by the peace treaty. Competition with these independent traders led the British-chartered Hudson’s Bay Company to ratchet up its business in beaver furs, leading to the beaver’s near extinction. More was at stake than the loss of the beaver: large parts of Canada’s natural environment depended on the animal. Beaver dams created the ponds for fish, frogs, and algae; a multitude of birds made habitats within the felled trees, which also attracted deer, elk, and moose. Yet after the French and Indian War, the beaver population — and the vast ecosystems it supported — all but collapsed. Between 1765 and 1800, about 6 million beaver pelts were exported from North America; by 1900, Canada’s beaver population was nearly extinct.

Saunt is surely right that we need newer stories like these to incorporate into our history of the nation’s founding, ones that bear more readily on the present. But his approach raises questions that are not easily resolved. Most important, by centering his account of what was happening outside of the British colonies at the time of the American Revolution, he may be giving the American Revolution more significance than it deserves, at least to regions so far outside the British colonies. For instance, San Francisco may have been established the same year as the United States. But the most important causes for the city’s founding have little to do with the Declaration of Independence; they reach much further back and are far more complex. Saunt attempts to bridge San Francisco’s founding to the British colonies through Spain’s competition with Russia, stemming from the fur trade. But if we are telling a story about imperial contest rooted in the fur trade, perhaps a better place to start is with the French settlement of present-day Canada, in the seventeenth century, where the trade first took off.

Yet the closer Saunt moves toward the east, the more illuminating the connections become. In the immediate aftermath of the French and Indian War, native groups throughout the Ohio Valley united against the British in Pontiac’s War. The war dispersed native groups across the western side of the Mississippi, and south, even as far as Havana. Many of the dispersed groups formed new tribal identities in the process. The Lakota Nation, for instance, traces its founding to 1776 — a date that, unlike the case of San Francisco, bears a close relation to the founding of the United States. Saunt argues, quite reasonably, that naming 1776 as its date of birth “was not a coincidence, but a clever ploy” on the part of the  Lakota Nation to put them on “equal footing” with the United States.

Many readers will walk away from West of the Revolution with a new and entirely necessary set of characters to fold into their narratives of 1776. Yet they may be surprised at how familiar this story still feels. The devastating effects the establishment of the United States had on Native American communities and the natural environment is well known. What Saunt ultimately reminds us is that this was a process that involved far more people, and stretched far beyond the Eastern Seaboard. In a global age, this kind of history could not be more welcome.

Eric Herschthal is a Ph.D. student in American history at Columbia University. His journalism has appeared in The New York Times, Slate, The Atlantic, The Daily Beast, and several other publications.

Previous Previous Post: In the Wolf's Mouth
Next Post: How I Became a Writer in a Family of Scientists Next