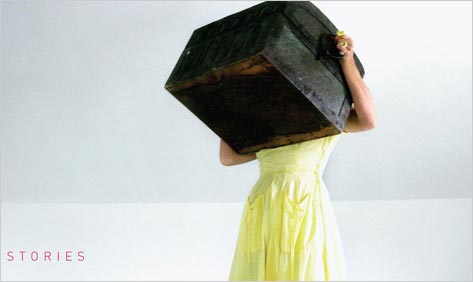 A particularly bleak episode in A. L. Kennedy’s 1997 volume, Original Bliss, imagines an astronaut drifting from his shuttle, tempted to perish in outer space. What Becomes — the mordant, meditative latest collection by the Scottish writer and stand-up comic — takes place on an often otherworldly Earth. One character spends her entire story in a therapeutic flotation device; another lingers in a deserted cinema, watching a movie play soundlessly. Studies of alien landscapes both physical and psychological, these tales imprison people in their own minds: like Kennedy’s astronaut, her latest characters are almost fatally disconnected.

When they do attempt to relate to one another, they tend to come off as robots harboring half-hearted social aspirations. “It was sometimes good to make a conversation, join in,” a man observes in “Vanish.” And sometimes not. One of Kennedy’s most stirring stories, “Marriage,” describes the horrors of joining: its protagonist abuses his wife. Rather than open themselves to others, Kennedy characters — like the tormented souls of Dostoevsky — frequently teem with unspoken soliloquies. Enclosed in the husband’s head, we experience “Marriage” as a terrifying trap — just as his wife, perhaps, experiences wedlock.

He recalls an incident that prompted him to hit her: “She was there in his home, in his room, in his bed in his dark and supposed to be his love — the feel of her smile, he was trying for that, his mouth idiotic with trying to find out that, with expecting her to be alive for him — but she turned away.” That repeated “his” suggests he wants not merely to connect with her, but also to own her, to absorb her into himself. And yet his feelings — his desire for her to come alive, his lurch as she distances herself — also seem rather natural. The sharpest moments of What Becomes permit the normal to bleed into the pathological, the casual into the criminal. The husband goes on:

The noise of it.

Back in her and came.

Which is why she had to be so awkward about today.

He shares his memory in short lines that strike quick and hard, and so revels in reliving that he echoes his own phrases. “Like a shot,” he says twice — highlighting the conflation of love and violence, touching and hurting, that haunts many of the stories in What Becomes. A frighteningly nonchalant analysis grounds this column of prose, a summary appropriate to everyday injury. And her injury is everyday — he beats her regularly — which is why it’s also remarkable. His wife spends most of the story several feet away from him: “Marriage” literalizes, and justifies, our distances from each other.

For all their incapacity to connect, many of Kennedy’s characters seem like-minded, painted from the same palette of tones — neurotic, sardonic, introspective. (One imagines they might enjoy group therapy together.) And for all the book’s interest in strangeness, it sometimes recreates typical — even stereotypical — situations. As a whole, the collection presents a spectrum of neurosis most compelling at its extremes: the playfulness of “Story of My Life,” for example, provides welcome counterweight to the despair of “Marriage.”

The abused wife’s bruised cheek is only a single injury among many in What Becomes.  Another character draws blood during overeager sexual experimentation, and several slice their thumbs. One of the latter — tormented by events Kennedy never specifies — observes the blood dripping from his hand, and sees “patterns complicating patterns… telling the story of someone standing, wounded.” The complications of our patterns, the variety and plenitude of our wounds — these are the subjects of Kennedy’s own stories, whether they unfold in outer space or in our devastated inner cosmos.

Abigail Deutsch is a writer from New York. Her work appears in The Los Angeles Times, The Village Voice, n+1, Bookforum, Poetry, and other publications.