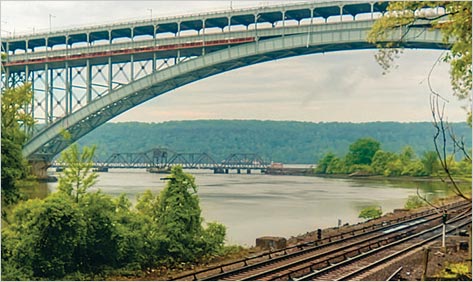 No onecould argue that the Garden State doesn’t command its healthy share ofliterature. From William Carlos Williams’s terse dispatches on Paterson toLeroi Jones’s ragged rages to Philip Roth’s rosy 1950s Newark to Judy Blume’s Are You There God? It’s Me, Margaret, thatzig-zag outcrop, an afterthought between the mid-Atlantic and New England,wields in literature the same outsized power it does in life—a crucial densitythat belies its actual size.

Notso in Jon Michaud’s When Tito Loved Clara, inwhich the Jersey suburbs wink like a green light across the Hudson tosecond-generation Dominicans in Inwood whose parents brought them over fromSanto Domingo, to dubious benefit, twenty years ago. Now, marooned on one sideof the river or the other, they’re constantly drawn back and forth across arumbling George Washington Bridge, as if Inwood’s Seaman Avenue and BergenCounty’s Oradell maintained a collegial tug-of-war.

Whenwe meet Clara Lugo, she’s on one such journey, headed across the bridge to pickup her niece, Deysei, who’ll complete high school in the genteel New Jerseytown of Millwood. Next, Clara will deposit her “ghetto-fabulous”half-sister Yunis at Newark Airport, en route to Santo Domingo to live withtheir mother.

Thispractical rearrangement becomes a more potent triangle when Yunis reveals thatDeysei is pregnant (a slight complication for Clara’s college plans for thegirl) and then, when, dropping Yunis off at Newark Airport, Clara catches siteof Tito, her partner in a brief, furtive high school love affair. Like Claraand her white husband Thomas, Tito seems to have a young mixed-race son. Butwhat Clara doesn’t know is that, although Tito’s life seems a mirror of her own(children! Miscegenation! Newark Airport!), he’s never moved out of hisparents’ basement apartment, and he’s never moved on from Clara. Ironically,he’s a mover, but the only passages he takes between NJ and Inwood are todeposit others into lives he covets.

Thebook, at this point, seems poised for a return to the rosy-hued days of theirromance—maybe even a crack at it in the present. But Michaud has far biggerfish to fry: not only the evolution of Tito and Clara and their respectivefamilies after their emigration from the Dominican Republic, but the evolutionof the entire tri-state area, whose real estate price fluctuations have theircorresponding effects on the region’s psychic geography.

Distancesthat would seem meaningless to an outsider—Oradell is only a few miles fromInwood Hill Park, after all—are full of significance to residents. When Thomasexpresses a “passing interest” in moving to Inwood, “among themulattoes, the remains of the Irish and Jewish communities of the last century,to be one of the newly arrived middle-class couples who’d been priced out ofBrooklyn and Astoria,” Clara responds, ‘”Why did I go to college?… Justso I could live down the street from all the dumbass immigrants I grew up with?I don’t think so.'”

We’reused to seeing such picaresque depictions of culture clashes from the point ofview of the charming outsider (Paul Auster, I’m looking at you), or thebeleaguered inhabitant, who watches time march past (or over) his old bodega.But where Michaud differs is in his far more precise (and correct, for the record)depiction of the straddling of cultures by both kinds of inhabitants: theresidents who’ve brought the farmer’s market to Inwood and the Dominicanswho’ve brought moro to Oradell.Witness Tito, stalking Clara in Millwood, glancing around a coffeeshop:

A crossing guard, a man in his late sixties, probably a retired police officer,blew on the steam from a cup of coffee while he read the high-school sportssection of the Star-Ledger. A coupleof mothers sat with their toddlers, whose faces were smeared with cream cheese.One mother was black and the other was white, but they both had kids with lightbrown skin. Maybe the white mother was actually a nanny? He couldn’t tell. That’sthe kind of place it was.

Asit happens, the simple event that brings Tito and Clara back into each other’sorbit—their old teacher’s move from Oradell back to the old neighborhood—couldseem soap-operatic if it weren’t the point. In such close quarters, Michaud issaying, it’s easy—even inevitable—for one small shift to bring two folks longseparated back to the same geography.

Andthat geography may be coming back into style, as recent novels by Meg Wolitzerand Francine Prose seem to suggest. Still, Michaud’s pitch-perfect depiction ofNJ is singular, if only for the fact that it refuses to let its characters everrest there in peace. First generation children, Michaud knows, always have thehard choice of staying with their parents or forging their new families alone. Clarachooses the former, Tito eventually chooses the latter, and still, neitherwinds up where she or he planned. Go ahead, make a new life, Michaud is saying.But there’s no way to move without breaking, losing, and leaving somethingbehind.

LizzieSkurnick is the author of Shelf Discovery, amemoir of teen reading. She lives in Jersey City, NJ.

Lizzie Skurnick is the author of Shelf Discovery, amemoir of teen reading. She lives in Jersey City, NJ.