The subjects of Adam Nicolson’s many books have included the Battle of Trafalgar, the English gentry, sailing along the coast of the British Isles, life in the Hebrides, working a small farm in Sussex, the history of Sissinghurst (his family’s ancient estate) and his attempts to restore its famous gardens, and, in my view, best of all, the making of the King James Version of the Bible in God’s Secretaries. Now he is here with Why Homer Matters, in which he sets out to show who — if anyone — Homer was, when he lived, what his two great epics are really about, and what they represent to countless generations down to, and above all, himself.

Though Nicolson studied Homer in Greek as a schoolboy, the line-by-line deciphering and scansion made reading the epics, he says, like “picking bones from fish.” Many years later, however, after having just survived a terrifying, 250-mile crossing of the North Atlantic from Falmouth, England, to Baltimore, Ireland, aboard a forty-two-foot wooden ketch, he began to read Robert Fagles’s translation of the Odyssey. It was a revelation: Homer was, he tells us, ” suddenly alongside me, a companion and an ally, the most reliable voice I had ever known.” He now insists that the poet is nothing less than “a guide to life” — which is a pretty wild statement. But this is a pretty wild book.

It is Odysseus’ elasticity and vigor, along with his ability to suffer without being a victim, that appeal to Nicolson: “He is all navigation, subtlety, invention, dodging the rocks, storytelling, cheating and survival.” One could say the same thing of the Count of Monte Cristo, of course, or Huckleberry Finn. So why Homer? Whence springs the air of infatuation and zeal that pervades these pages? Homer, he urges with typical ardor, “is like a beautiful stone, monumentally present, a paternal foundation, large, slightly ill-defined, male and reliable. He is not a friend, a lover or a wife; far more of an underlayer than that, a form of reassurance that in the end there is some kind of understanding in the world.” That hardly makes sense except at an emotional level. But, then, as he admits, “Homer-love can feel like a disease.” More about this later. 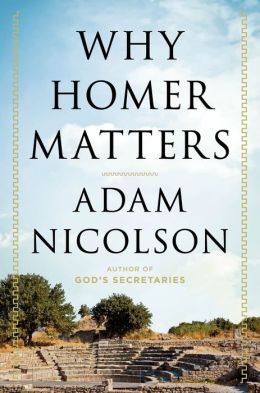 Along with such fits of possession (as they seem), Nicolson delves into matters more interesting to cooler brains, such as the pedigree of the stories told in the Iliad and Odyssey. After a great deal of reading and deliberation, Nicolson decides they arose from the clash and fusion between the peoples of the Eurasian steppes, semi-nomadic and hero-based in culture, and the cities of the eastern Mediterranean. “Homer is the trace of that encounter,” he says, one that took place around the second millennium BC, out of which came “Greekness” and, eventually, “Europeanness.” He believes that the poems should be seen as “the violence and sense of strangeness of about 1800 BC recollected in the tranquility of about 1300 BC, preserved through the Greek Dark Ages and written down (if not in a final form) in about 700 BC.”

But then who exactly was Homer? One scholar, he tells us, insisted that he was Swedish, another that he was from Cambridgeshire, while the English novelist, translator, and perennial contrarian Samuel Butler claimed that the poet must have been a “young, headstrong and unmarried” Sicilian girl. For his part, looking at the evidence and the more plausible theories presented by other scholars, Nicolson joins those who say that there was no one Homer, but that “he” came to be with the version of the epics put together in the third century BC by editors in the library of Alexandria, who wove together numerous manuscripts, deleting unacceptable or contradictory passages, to create a unified text and a single author. Before that, he says, Homer was “a voluble chattering crowd of multiple voices,” or, as he puts it more fervidly, “Homer, before Alexandria, was multiplicity itself.”

Nicolson is struck with awe, as are we all who contemplate it, by the antiquity of the two Homeric epics and by the nature of epic itself, which he handily summarizes as lying somewhere between memory and history. Epic, he writes, “occupies a third space in the human desire to connect the present to the past,” serving to “make the distant past as immediate to us as our own lives.”

Along with discussion of Homer, scholarly and otherwise, the book hares off on strange missions, exploring such matters as the 1944 kidnapping of the German general Kreipe in Crete by Patrick Leigh Fermor (and company), Nicolson’s own pilgrimage following their route, and an extended — and unconvincing to me — chapter-long comparison of Homer’s warriors with American street gangs (“the hero complex of the Greek warrior is simply gang mentality writ large”). In a chapter titled “The Metal Hero,” which deals with the Bronze Age and the blades used by Homer’s heroes, he gives us an account of being raped in Syria. (“Only once in my life have I had a knife held to my throat.”) In other words, there is a good deal of the grab bag about this work.

The passages in which I truly rejoiced are Nicolson’s descriptions of the sea and of sailing and their union with the Odyssey. They are intoxicating, eloquent, and evocative. Here he is upon first looking into Fagles’s Homer: “I can see the sunlight coming sheening off the backs of the swells that morning, as they made their way past and under me, combed and slicked with the sea-froth running down them, every swell the memory of storms in the Atlantic far to the west, steepening to the east and then ruining themselves ashore.”

One does not wish to presume — and yet one does — but it seems that Nicolson has conferred his passion for and exultation in sailing upon Homer, and thus the extravagance of his pronouncements. Sailing and Homer meld into one ecstatic metaphor for life lived in its goodness. It is here that Nicolson is most compelling, and so it is aboard a little sailing vessel that I leave you. As the air’s stillness gives way to a breeze,

the canvas stirs, like a dog in a bed, begins to acquire a form, and the boat gains a sense of purpose, a coherence it had lacked as it slopped in the chop or swell. The wake slowly starts to bubble behind you, “the gleaming wake” that runs behind Homeric ships as a sign of life and excellence, the cockpit drains gurgle . . . and with tiller and sheet in hand you sit up and pick your course across the sea. That is the Odyssean moment, everything liquid but directed, everything mobile but related: the sea itself, your boat in it, the air and its winds, all the possibilities.