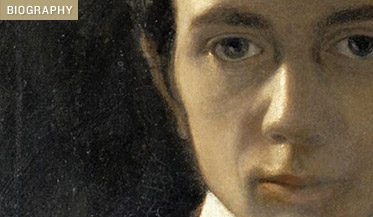 In the fall of 1816, a group of Londoners came together for merriment and repartee. Their host and hostess were brother and sister Charles and Mary Lamb, who together authored the children’s book Tales from Shakespeare (1807) and occupied seven rooms on the third and fourth floors of a building on Inner Temple Lane. There, they regularly brought together many of the choicest offshoots of England’s artistic and intellectual community. Evenings at the Lambs were relaxed affairs where priggishness was discouraged; in the words of one of their usual guests, the essayist, lecturer, and arts critic William Hazlitt, “If a person liked anything, if he took snuff heartily, it was sufficient.” The informal atmosphere was part therapeutic. Though fond of company and feisty by temperament, Charles looked toward these evenings as a way to massage his sister’s spirits. He’d pledged himself as Mary’s lifelong guardian ever since, in a rage of unreason, she murdered her mother and injured her father on a Thursday afternoon in September, 20 years before.

One wonders how the two Lambs’ pulses must have raced when their normally tranquil brother, John Lamb, was galled into violence by Hazlitt, their good friend. While the two men were engaged in a game of whist, John casually opined that the painter Hans Holbein the Younger was as skilled in his deployment of color as Van Dyck. The incident that followed, which was recorded by the artist Benjamin Robert Haydon in his diary, pithily conjures the quintessence of Hazlitt’s indomitability:

“If you don’t hold your tongue, right now, I’ll expose you in the newspapers!”
“And if you do, I’ll pound you into a mortar!”

Hazlitt loosed an imprecation before John socked him in the eye. Cards scattered as the table tumbled over, startling those in the room. Wary of escalation, an onlooker seized Hazlitt’s arms — provoking the injured man to retort, “By God, sir! You need not trouble yourself. I do not mind a blow, sir; nothing affects me but an abstract idea!”

Seldom has a writer been more damaged by his own byline than Hazlitt, whose sentences jostle forward with the velocity of corporeal thwacks. His defiance toward the prejudices of his era and his ability to inhabit a world of ideas like others inhabit their sitting rooms taxed his friendships and earned him the enmity of many a political opponent. Though he was one of the most commanding essayists of his or any other time, his books sold poorly — except when girded in impenetrable anonymity — largely due to his ability to draw ad hominem attacks from the Tory press, which serviced the monarchal system he despised. For a while, after his death at the age of 52 (on September 13, 1830), it seemed his reputation would lapse into oblivion, to be reanimated unpredictably by scholars or writers of inordinate perspicacity. In recent years, however, interest in Hazlitt has been on the upswing — as shown by the attention trained on a number of writers who have written appreciatively of him, such as A. C. Grayling, Tom Paulin, Michael Foot, and Duncan Wu. All of these authors were involved in a successful campaign spearheaded in The Guardian that helped raise the ?26,000 necessary for the restoration of Hazlitt’s gravesite at St. Anne’s churchyard, in London’s Soho district.

A professor of English at Georgetown University, Wu edited an edition of Hazlitt’s last collection of essays, The Plain Speaker (1826). Extracted from the original two-volume work, the one-volume edition offers a sturdy entryway into Hazlitt’s oeuvre. Essays like “On the Pleasure of Hating” (which contains the historic boast “Love turns, with a little indulgence, to indifference or disgust: hatred alone is immortal”), and “On Application to Study” do not require an exegesis to unsheathe their wit and power. By extension, an essay such as “On the Prose Style of Poets” should be lodged in the creative writing curriculum and held up as a corrective to the embalming style now enshrined in the editorial departments of numerous outlets. Although the targets of that essay are the mellifluous scribes who write in a uniformly sonorous fashion where “periods complete their revolutions at certain stated intervals, let the matter be longer or shorter, rough or smooth, round or square, different or the same,” it’s possible to transpose this complaint toward our present era, as Tom Paulin does in his formidable introduction. Paulin notes, “t’s as if Orwell’s dictum that good prose should be like a windowpane has discouraged any attempt to see prose as anything other than the vehicle of ideas.” Indeed, it is the rare writer who would venture, and the rare editor of a general publication who would endorse, the kind of brachiating phrases Hazlitt uses in his tribute to the actor Edmund Kean (William Hazlitt: Selected Writings): “n giving effect to the conflict of passions arising out of the contrast of situation, in varied vehemence of declamation, in keenness of sarcasm, in the rapidity of his transitions from one tone or feeling to another, in propriety and novelty of action, presenting a succession of striking pictures, and giving perpetually fresh shocks of delights and surprise, it would be difficult to single out a competitor.” Though Hazlitt wrote elsewhere, in his essay “Whether Genius Is Conscious of Its Powers,” “No really great man ever thought himself so,” his commendation of Keane both magnifies and demarcates the shadow cast by his own accomplishments.

Hazlittites, romanticists, and students of 19th-century radical English politics should all find something laudable in Wu’s new book, William Hazlitt: The First Modern Man. Insofar as the narrative crests upon the author’s engrossing choreography of the facts instead of the luster of his prose style, the book may best be adjudged an academic rather than a literary biography. That said, Wu writes without strain and is not hampered by minutiae. The chapters proceed at a good clip because the author has gathered up an abundance of moments that deserve to be recorded. And there were many: Hazlitt was born into an interesting family (his Irish father, a Unitarian minister, helped cement the faith in America); moved in illustrious company (to varying degrees he interacted with Wordsworth, Coleridge, Keats, Godwin, and the Hunt brothers, John and Leigh); suffered the slings of misfortune in his love life (at the age of 43, he fell in love with a 19-year-old girl, which inspired him to secure a divorce by arranging, with his wife’s consent, to be caught in flagrante delicto at a brothel — though the plan succeeded, his crush nixed his proposal); and died in penury (Charles Lamb was among those present along with his only living son, William Jr.).

As registered by the subtitle of his book, which for its neon glitz belongs up there with Harold Bloom’s Shakespeare: The Invention of the Human, Wu is fervent about his subject. A game could be made out of spotting his excuses for Hazlitt’s shortcomings. I especially enjoyed this passage, which exculpates Hazlitt from the athlete’s passion; the litigious episode alluded to in it involved Blackwood’s Magazine (a Tory publication that repeatedly slandered Hazlitt by calling him, for instance, “a mere ulcer, a sore from head to foot, a poor devil, so completely flayed, that there is not a square half-inch of healthy flesh on his carcass”):

Collier claimed that Hazlitt “once in my presence knocked a better player down by a blow on the forehead with his racket, because he could beat him in no other way. The physical and emotional release was sorely needed during the Blackwood affair, which put me nearly underground.” No wonder. Such a sensitive man found the public humiliation and strain of dealing with lawyers intolerable.

To advance his contention that Hazlitt is the prototype of the modern man, Wu points toward the openness with which Hazlitt wrote about his personal life, in a work such as Liber Amoris (1823); to the psychological acuity he brought to the study of art and to his contemporaries, as demonstrated in Characters of Shakespeare’s Plays (1817) and The Spirit of the Age (1825); and to virile sensibility he infused into sports journalism by focusing less on the results of an event than on the passions fueled by it.

In the preface, he writes, “Not only did Hazlitt shape the understanding his own age had of itself, but in doing so shaped our own. We are the inheritors of the Romantic sensibility: its values and aspirations remain compelling, like some dream remembered from childhood.” There is something wobbly to that remark that puts me in mind of Hazlitt’s warning against making grand statements. In the essay “Originality,” he notes that “bombast and hyperbole show a dearth of imagination; they are the desperate resources of affectation and want of power.” Two of the core components of the romantic sensibility, the emphasis on solitude and communion with nature, seem more attuned to the dreams of our grandparents than the present circumstances of our globalized society where privacy is scarce and its technology, not nature that overwhelms us. But one needn’t deify Hazlitt as the Moses who pushed us toward modernity in order to be riveted by enduring insights such as this one — a personal favorite — from Lectures on the Dramatic Literature of the Age of Elizabeth (1820) about tarrying with overviews:

Modern authorship is become a species of stenography: we continue even to read by proxy. We skim the cream of prose without any trouble; we get at the quintessence of poetry without loss of time. The staple commodity, the coarse, heavy, dirty, unwieldy bullion of books is driven out of the market of learning, and the intercourse of the literary world is carried on, and the credit of the great capitalists sustained by the flimsy circulating medium of magazines.

Previous Previous Post: The Inheritance: The World Obama Confronts and the Challenges to American Power
Next Post: Things I've Been Silent About: Memories Next