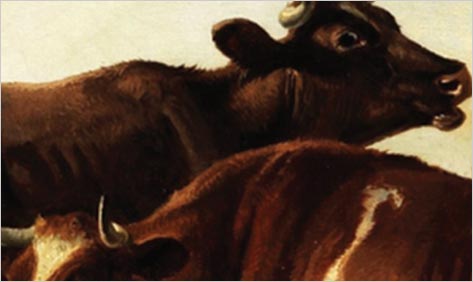 Do most men harbor some form of misogyny? I don’t mean: Are most men actively hateful toward women? Instead: Are they (am I?) guilty of actively or passively abiding or ignoring negative attitudes that purport to address “women” in toto? When a man who is at loggerheads with his girlfriend says to himself or a buddy, “Women are crazy!” is he shoring up oppression? As hoary as the question may be, is the hip-hop fan who is blasé at the mention of “bitches” complicit with upholding a form of cultural subjugation? What about the businessman who partners with governments of countries that treat women as second-class citizens?

Misogyny is so pervasive — and therefore so frequently invisible — that it is worth thinking about what it takes to refresh one’s awareness of the specter at large. Noëlle Revaz’s debut novel, With the Animals, offers a wrenchingly specific example, taking readers into the head of Paul, an illiterate, emotionally stunted, Francophone farmer who feels a greater kinship toward his livestock than his wife, children, or neighbors.

Hard-drinking, taciturn, and a demon for work, Paul is the go-to-guy if you want to get the skinny on local crop production, but he’s otherwise best avoided. Never mind his minimalist hygiene or the difficulty he has distinguishing between his children. What will scrape at your mind, long after you have finished With the Animals, is Paul’s malevolent nickname for his wife: Vulva. (His favorite cow, by contrast, is named Blossom.) In his translator’s note, W. Donald Wilson points out that Revaz had to get over the abashment she felt about using the word that delineates the scope of Paul’s affections toward his wife. One might scoff at the plausibility of such a clinical epithet being used by a man who is ill at ease holding a pencil, just as one might pause over his use of words such as bumptious, roil, festoon, and magnanimous, considering his aptitude for malapropisms. No doubt Revaz’s writing is concerned more with style and sound than realism — an inevitability, perhaps, given the simple frame on which she hangs her story.

With the Animals is constructed around one of fiction’s ur-templates: a rooting-tooting stranger comes along and topples the routines of those around him. In this instance the catalyst for change is Jorge, a Portuguese migrant worker whom Paul — parochial as a gnat — rechristens Georges. Unflappable in the face of Paul’s curmudgeonly ways, Georges does his best to socialize his employer by drawing him into the company of his neighbors. Even better, he gamely prompts him to show his downtrodden wife a modicum of affection. (As a baseline, consider that Paul is a man who says things like, “Vulva sometimes she forgets the right way to behave and make herself useful so you have to exercise her when she falls to bits and neglects her duty.”)  From a reader’s perspective, what keeps Paul from being thoroughly insufferable is his consciousness. For just as Paul’s vocabulary surprises at times, so too does his penchant for rustic observation:

If I’m digging in the sod and I come across an earthworm, I start looking and expanding my ideas and taking an interest. Some folk never turn a hair but smash straight down with the flat of the spade, and there’s some slice clean through and kill with never a thought, never allowing any notion that critters might have stories too, stories just like ours, only we’re bigger. I never cut through an earthworm thoughtless, and with him squirming there what I really like is to tell a story about how he’s lost his direction and feels the spade coming down and he’s a worm farmhand and he has a worm boss and a squirmy lump of a wife back in the farmhouse, and he’s maybe asking himself in this spot where’s his field and where’s his farm with the animals and the hay. For sure it makes him shudder, the metal coming down from high, and he strangulates himself trying to get away, and he never knows there’s a person guessing and seeing all he has inside his head, for you’re so high up and so much freer in your thoughts and you despise his squirming.

The above passage unfolds like an allegory of what it’s like to read With the Animals. While it is doubtful that one will empathize to any significant degree with a man who says that his wife goes well with the furniture, Revaz shows that even the most brutish life merits scrutiny on account of the reflections it can turn over within us. Including those that ought to make us uncomfortable.