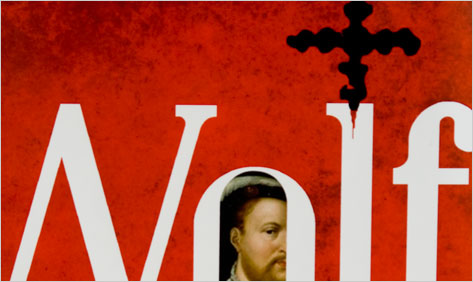 In Putney, England, in the year 1500, a young man is beaten, almost to death, by his drunken father.  “Felled, dazed, silent, he has fallen” in a yard that  “smells of beer and blood.” It is not the first beating, but it will be the last — of this kind at least.  The youth is Thomas Cromwell (1485?-1540), the central character in Hilary Mantel’s astonishing new novel Wolf Hall.  He will become Cromwell, Earl of Essex, Master Secretary and “Viceregent of Spirituals” to King Henry VIII, and the chief architect of the Protestant Reformation. Soldier, politician, and power broker, he will be a gentle father himself. And a killer.

In historical fiction, Cromwell typically emerges as a stately edifice around which clouds of legend and history swirl — a monument to be admired or demolished, depending on the author’s prejudice.  Hilary Mantel, however, has little interest in edifices.  It is the mind of Cromwell, and the mind of Tudor England, that she attempts to penetrate.  We might expect nothing less from a versatile author who has, among many other accomplishments, powerfully dramatized the French Revolution in one novel (A Place of Greater Safety) and the consciousness of a modern psychic in another (Beyond Black).  Nevertheless, in Wolf Hall, Mantel’s ability to insinuate herself into a distant era and consciousness is almost uncanny.  From that first brutal scene, the novel holds us fast and close.

Cromwell, the “felled” son, survives those early beatings, we realize, not only because he is tough and cunning but also because he understands his enemy, absorbs the attack, and bides his time.  These qualities assist Cromwell’s rise to power — a story that, in Mantel’s hands, is as thrilling as any espionage drama — but they do not explain him.  Mantel, to her credit, does not intend to explain him.  Instead she creates this complex, elusive character before our eyes even as she compels us to see the world through his.   It is a world of shadows and secrets, ideal terrain for a gifted fixer.  “A man’s power is in the half-light, in the half-seen movements of his hand and the unguessed-at expression of his face,” Cromwell explains.  “It is the absence of facts that frightens people:  the gap you open, into which they pour their fears, fantasies, desires.” He is about to be appointed Keeper of the Jewel House, a powerful position in 1532.  Later, as the saintly and insufferable Thomas More faces execution, Cromwell similarly muses  “my workings are hidden from myself.”

The historical events in Wolf Hall are less opaque, and broadly familiar from numerous costume dramas and (generally) bad historical novels.  King Henry VIII, besotted with Anne Boleyn and lacking a male heir after twenty years of marriage to Katherine of Aragon, demands an annulment of that marriage.  The Pope, most of Europe’s monarchy, and many scheming courtiers oppose him.  Even Cardinal Wolsey, the King’s deviously brilliant adviser, fails and eventually perishes in his attempt to sway Rome and its allies.  England itself, ruled by a willful monarch, lorded over by ruthless aristocrats and terrorized by plague, is divided and fearful.

We know what will follow historically: Henry’s six wives, the beheadings, the religious persecutions.  But Mantel leaves that to the future.  Instead of treading well-worn ground, she sets Wolf Hall in the tense years (1500-1535) leading up to the Protestant Reformation, a critical period in Cromwell’s personal ascent and in England’s political transformation.   “What was England before Wolsey?” Cromwell reflects when his mentor dies in 1530, “A little offshore island, poor and cold.”  Ever Wolsey’s protégé, Cromwell envisages an England of secular laws, with a healthy treasury and a literate populace unfettered from the Roman faith and from its own superstitions.

Indeed, in Wolf Hall Cromwell embodies that new England: he is the blacksmith’s son who becomes the King’s man.  “His guess is, the clergy own a third of England,” Mantel has Cromwell musing as he nudges the monarch towards dispossession of the church. “One day soon, Henry will ask him how the Crown can own it instead.  It’s like dealing with a child; one day you bring in a box, and the child asks, what is in there?  Then it goes to sleep and forgets, but next day, it asks again.  It doesn’t rest until the box is open and the treats given out.” An earlier sketch gives us this Henry:  “How brightly coloured the king is, like the king in a new pack of cards:  how small his flat blue eye.” Then this one:  “The king comes in.  It is a warm day and he wears pale silks.  Rubies cluster on his knuckles like bubbles of blood.”

In descriptions such as these — tactile and immediate — each character in Wolf Hall arrives before us with an ease that is both startling and seductive.  We come to know intimately the mannerisms of Cardinal Wolsey (“He makes a great, deep, smiling sigh, like a leopard settling in a warm spot”); of Sir Thomas More (“More rises smoothly, as if the thought of custody has put a spring in his step; the effect is spoiled only by his usual grab at his garments, the scuffle as he shrugs himself together…”); of the Duke of Norfolk (“Flint-faced and keen-eyed, he is as lean as a gnawed bone and as cold as an ax-head”); of Anne Boleyn (“…her body taut like a bowstring, her skin dusted with gold, with tints of apricot and honey; when she smiles, which she does often, she shows small teeth, white and sharp”). Even the infant Elizabeth becomes a person: “Ginger bristles poke from beneath her cap, and her eyes are vigilant; he has never seen an infant in the crib look so ready to take offence.” And several times we glimpse Henry’s daughter Mary (later Bloody Mary) as a girl who, like Cromwell, cultivates the art of patience and of revenge.

This is a crowded stage, yet each player, however minor, is permanently fixed in our memory, thanks to Mantel’s psychological acuity and her compressed, often startling language.  Great events, such as the coronation of Anne Boleyn, are similarly arresting.  “Sixteen knights carry Anne in a white litter hung with silver bells which ring at each step, at each breath:  the queen is in white, her body shimmering in its strange skin, her face held in a conscious solemn smile, her hair loose beneath a circle of gems.”

Horrors are also depicted with unflinching clarity.  Cromwell is just a child when he sees his first religious martyr burned at the stake, an old woman, a Protestant “Loller,” who is herded to her death by “two monks, parading like fat gray rats, crosses in their pink paws.”  As Henry’s enforcer, Cromwell will see other monks publicly disemboweled and will fail to prevent Thomas More’s beheading.  Mantel also shows Cromwell’s private torments as plague kills those he loves and almost takes him.  To this extent, the man is humanized but never pitiable — and never innocent.  “The fate of peoples is made like this,” he observes in 1535, as he negotiates with a French envoy, “two men in small rooms…This is how the world changes: a counter pushed across a table, a pen stroke that alters the force of a phrase, a woman’s sigh as she passes and leaves on the air a trail of orange flower or rose water; her hand pulling close the bed curtain, the discreet sigh of flesh against flesh.”

The novel ends on a similarly tantalizing note, with Cromwell about to visit Wolf Hall, seat of the Seymours.  Little Jane Seymour has caught his eye — and Henry’s too.  The exquisite tension with which Mantel leaves us is that of the tightened bow, of the arrow before it flies.