Word Upon Word: Reading in a Foreign Language 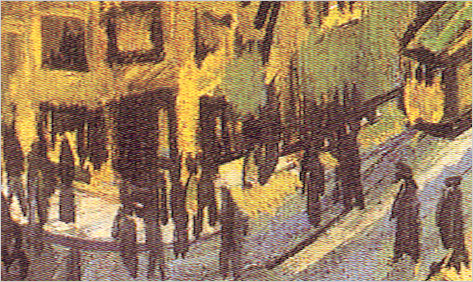 I never finished the first book I tried to read in German. I was living in Berlin and had only been in beginner’s language classes for two months when I decided — perhaps ambitiously — to pick up a copy of Harry Potter und die Kammer des Schreckens, the German translation of the series’ second book. I had only read the first Harry Potter, but having seen the movies (sacrilege!), I was familiar enough with the story to feel confident. I shouldn’t have. In order to make the halting experience of wading into this sputtering, consonant-heavy tongue feel more like, well, reading, I tried to cap the number of words I would allow myself to look up per page. The breaking point was Heuler. “Heuler {m.} [zool.]: baby seal,” my dictionary supplied helpfully. As I managed to deduce after several senseless pages, “Heuler” comes from the verb meaning “to howl”; a howler is, in this case, not an animal but rather the angry, screeching letter Ron receives from his mother when she learns he has flown the family car to school. But enough was enough. It’s one thing to stumble over vocab, another to have seals flopping about in unexpected places. And with that, I traded the boy magician for books that tread in reality.

I picked up and moved to Berlin a year ago to learn German and to try my hand at full-time freelancing. My reasons for undertaking German were nebulous at best — a fondness for Berlin, some vague sense that a language was a good journalistic investment, a belief that the language’s rigid structure would click easily with my syntax-happy brain. In the end, this was only part of what sustained my interest during this year-long quest to master the intricacies of English’s sterner Teutonic sibling. Above all else, it was the experience of being transported back to a root view of language.

German is a language of building blocks. Unlike in English, with its highly absorptive history — most of our less colloquial vocabulary is derived from Greek or Latin — German words are a sum of their own parts. Take, for example, the word entscheiden. Entscheiden, meaning variously to decide, to determine, or to conclude, is a compound verb formed from the prefix ent-, designating movement away, and the verb scheiden, meaning to part. The verb essentially describes the act of decision as the act of “separating away from,” the singling out of one option from a pack of many. “Decide,” if one searches out the Latin etymology, isn’t really so different — it comes from the word “to cut off” — but the word’s classical origins render it less familiar, and less brutal. German, on the other hand, turns to its own lexicon for components wherever possible. For a language learner, this additive property is at once a blessing and a curse. It’s easier to infer the meaning of an unfamiliar word when one can parse it into segments, but the endless accretion of German compounds can make such parsing near impossible. (The Bezirksschornsteinfegermeister, the chief district chimney sweep, is a real person. Mark Twain, as always, put it best: “Some German words are so long that they have a perspective.”)

But for a reader, adjusting to a new vocabulary means entering an alternative linguistic reality. To return to the previous example, the component parts of entscheiden lend it an imagistic quality: the verb is a verb of resolution, punctuating a sentence like a pounded fist. And the experience of learning a language, in particular German, is full of moments in which a word’s constituent parts suddenly reveal themselves. I knew I would love German when I learned the word Gluhbirne, for light bulb. Its two halves, taken separately, mean “heated” and “pear” — the perfect metaphorical summary of that luminescent orb. Yet it takes a step outside of English to become reattuned to the metaphorical possibility of our own language. English, too, trades in visual analogy (a bulb is, after all, a plant bud), but this phenomenon is easier to ignore when wrapped in a native language, already bled of its strangeness.

I had a similar burst of linguistic revelation at the kitchen table, shouting in the midst of my grammar drills as my roommate dug into some wurst. “Does Fernsehen, the word for television, literally mean to see from afar?” I asked, having suddenly seen a familiar verb split into its component pieces. Christian, chomping on his salami, looked as blank as I looked self-impressed. My epiphany was this: the prefix “tele-” comes from the Greek for far, “vision” from the Latin for “to see,” the same meanings as fern and sehen in the German. It’s a perfect case study in how English draws from outside itself when building compounds. I suspect my roommates will not miss these fits of etymological glee.

It’s hard to know how much of my heightened awareness of German word building is simply part of the encounter with the new, and how much is built into the structure of the language itself. But I do know, as I started to venture into reading in this new tongue, that I felt, perhaps ironically, a renewed sense of precision. The first book in German that I actually finished was Der Vorleser, better know as The Reader, by Bernhard Schlink. Even in the untranslated title, there is a clarity that the English title lacks: vorlesen is the verb for, specifically, reading aloud, as the narrator, Michael Berg, does for his much older lover in the novel. To enter the murky waters of a foreign book is give oneself over to impulse — sometimes a word simply means what it feels like it should mean. There is a strange push and pull between hyper-literalism and complete abstraction: while the words I knew, or could guess at, were jarred to life by a whole new relationship between image and sound, the way those words wove together left me reading through fog. Perhaps Michael Berg puts it best himself as he labors over an book in English: “Und wie stets schaffte die fremde Sprache, die nicht beherrsht und mit der gekämpft wird, ein eigentümliches Zugleich von Distanz und Nähe.” Or in my not-very-elegant translation: “And as always the foreign language, unmastered and grappled with, made for a curious combination of distance and nearness.” (Welcome to what German literature sounds like in my head.)

Above all else, reading in a new language changes the process of noticing. I like to think of myself as an attentive reader, but it can be hard to keep the eye from moving too fast over the page, or to catch a writer’s little tics and pet words. In Der Vorleser, I came across a verb — zögern, to hesitate — that I had to look up, only to encounter it again and again. Each time it gave me pause as I tried to remember the definition, and that small moment of grasping for meaning left me more aware of the way Schlink chose his words. Was this a mundane case of word overuse, or was it a leitmotif, a cue that something in the relationship between Michael and Hanna is never quite comfortable? Either way, I’m not sure I would have registered it were I reading in English. Similarly, there were the saws. I kept looking up, and instantly forgetting, the word Säge, saw. Why all the construction? Again, the gentler pace of reading meant more time to dwell in the nuance of what I was taking in. The constant construction taking place in Hanna’s courtyard becomes the sound of a Germany rebuilding. In a novel that takes as its subject the way one generation inherits and processes the wounds of the one before, the clang of saws provides the soundtrack to a nation emerging from a shattered past.

You’ll notice, or not, that I’ve said little of German’s infamously elaborate grammar. It’s impossible to summarize just how unfamiliar German syntax is to English ears; suffice to say that it has three different genders, four different case endings, and that its sentences sometimes end with a long string of verbs incanted in rapid-fire gibberish. Negotiating sentence structure was another Sisyphean burden of this new language, and it slowed my reading to a sluggish crawl. After Der Vorleser, I moved onto Die verlorene Ehre der Katharina Blum, or The Lost Honor of Katharina Blum, by Heinrich Böll, the Nobel laureate and literary face of the German postwar. Written with a detached reporting style, Katharina Blum recounts the trials, literal and figurative, of a Munich housekeeper as she is drawn into a web of tabloid slander. The novel’s voice was, for me, a challenge. How to trace the subtle gradations in tone and perspective when I could barely trace the sentences themselves?

In college, I took a course taught by the New Yorker critic James Wood, who, as any reader of last year’s How Fiction Works already knows, worships at the altar of free indirect style. Free indirect style is that literary sleight-of-hand whereby a third-person narrator subtly enters the consciousness of his characters. (I always remember Wood’s definitive example: “Lily, the caretaker’s daughter, was literally run off her feet,” the opening sentence of James Joyce’s “The Dead.” Here, the “literally” supplies the scant, colloquial breath of exaggeration that signals, narrator notwithstanding, that we are seeing the world according to Lily.) I never quite understood why Wood was so preoccupied with free indirect style — a command of which he seemed to find the single best indicator of literary greatness — until I spent two years working in publishing. As I waded through my office’s slush pile, the single biggest problem among the fiction that did not make the cut was a failure to adequately navigate shifts in consciousness. But in German, I was surprised to see that this problem can be addressed at the level of grammar. The language has an entire mood — called the Conjunctive I — whose function is entirely to relate indirect speech. In a way, as I discovered while reading Katharina Blum, the Conjunctive I functions as a surrogate for free indirect style. Throughout Katharina’s interrogation by the authorities over her connection to a known thief, accused variously of terrorism and political insurrection, Böll returns again and again to the Conjunctive I. The effect is powerful. Böll manages simultaneously to inhabit the “objective” voice of his narrator and to tell Katharina’s story from her seemingly unmediated perspective, all with the simple tweak of a verb ending.

To even notice and think about these details of syntax and vocabulary as a reader is the real boon of trying to read in a new language. It is, in the end, a slowing down, a return to language in its most rudimentary form — that is, the consideration of a book as a series of words strung together. The novel feels as if it’s building itself from the bottom up, word upon laborious word, as opposed to coming together already whole, a heady collision of language and theme. It is more than a question of having access to the greats of other literatures, but of having a revivified access to our own. I can only imagine what English would look like if I learned Russian.