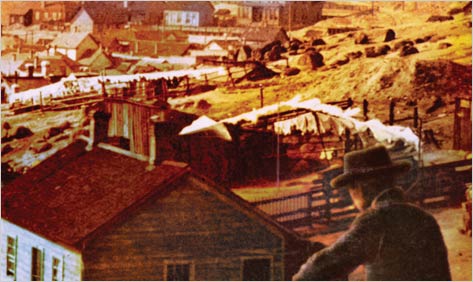 Morrie Morgan, the charmer who starred in Ivan Doig’s The Whistling Season as the man impressed into duty as teacher in a tiny town inundated by homesteaders in the 1907 Montana land rush, returns to Montana from a decade-plus in Australia and settles in the boisterous mining town of Butte.

Work Song kicks off with Morrie (whose surname is actually Llewellyn) hiding out from Chicago gangsters he fleeced in a boxing scam that ended up with his prizefighter brother dead.  He stumbles into a Welsh boarding house run by a woman whose husband had died in the Spectator mine fire—the worst disaster in mining history—two years before. She and the other roomers, two retired miners, clue him in to the town’s idiosyncracies, beginning with advice to never wear the “copper collar”—i.e., become an Anaconda Copper company man. “Lowest form of life,” one of the miners tells him.

Doig’s choice of time and place offers incredible riches. “If America was a melting pot, Butte would be its boiling point,”  Morrie notes. The “Richest Hill on Earth” was a boomtown in 1919, with tens of thousands of Cornish, Finnish, Irish, Italian, Serbian and Welsh miners drawn to the wages of four and a half dollars a day —  a rate to rival that of Henry Ford’s new assembly line in Detroit. Each immigrant group had its neighborhood characters and rituals, from the long-form wakes of Dublin Gulch  (there was a death every week in the mines) to the saunas and polkas of Finntown.

Two years before Morrie’s arrival in Butte, a Wobbly (International Workers of the World) organizer was lynched by company goons. The head of the miners’ union, who is calling wildcat strikes to protest a dollar-a-day decrease in wages, asks Morrie’s help in keeping his miners from joining the more radical Wobbly cause.

“His conversation came off the top of his head and out his mouth seemingly without passing through his brain. It was as if he had speaking apparatus on the outside of his head, like English plumbing,” Morrie muses in a typical aside.

Morrrie settles into a job in the lavishly appointed Butte Public Library, which is run by a dictatorial former rancher Sam Sandison—“he’s meaner than the devil’s half brother,” a fellow boarder warns. Sandison’s power derives from his world-class collection of leatherbound gilt-edged books. (Morrie’s delight in these books is one of the joys of Work Song.)

Doig underscores the slyness and wit of the miners who stood in opposition to the company. Particularly tasty is the relationship between Morgan and the two company goons who tail him when he arrives in town without luggage (his was lost). Morrie recognizes the one with the “flattened features and oxlike blink,” as a former heavyweight champion Typhoon Tolliver, made of “muscle, gristle and menace.” For his part, Tolliver sees Morrie as nothing more than “one of those outside infiltrators.”

Morrie descends into the Muckaroo mine and describes the fearsome ride down to 3,000 feet below the surface, the hellish heat, the cave-ins from nearby dynamiting explosions. His mission: to unite the miners behind a song that would measure up to the IWW’s  effective “Pie in the Sky” ditty. And on Miners’ Day, the one day off for the year, he accompanies his gussied-up landlady to the company-sponsored picnic at the elegant Columbia Gardens, one of the few places in Butte with green grass.

The rollicking final chapters to Work Song are light-hearted in comparison to the history of this hard-scrabble, hard-luck town. But Doig, who was raised in White Sulphur Springs, gets Butte right, beginning with the rhythms of the language, which arose from the multi-ethnic stew to create an argot so tasty it also informed that prototype of hard-boiled detective novels, Dashiell Hammett’s 1929 novel Red Harvest. (Hammett’s Continental Op, a Pinkerton man, opened his story with a Butte  character: “I first heard Personville called Poisonville by a red-haired mucker named Hickey Dewey in the Big Ship in Butte.”) Read Hammett for the grit, Doig for the lingering melody of a long-vanished era.